Scots, you have heard me many times here actively seeking your help here for the defence of our own little culture, from the Leviathan that is as many of you put it Wastemonster, and how it seems our only Welsh language TV broadcaster is set to come under the control of a partial, London orientated, licence guzzling organisation, laughingly called the “British” Broadcasting Corporation. I urge those of you again who have not signed Cymdeithas yr Iaith Gymraeg [the Welsh Language Society]’s petition to do so – and I thank those of you who have already.

But there is more than just Welsh interest under threat here – as well you know. The unionists are running scared, fearful of a nationalist surge in the Celtic nations. To this end, legal powers are being wielded as never before to destroy our very fabric as effective and possible independent nations. I present to you the speech of Lord Elystan Morgan in the House of Lords today. Let us be under no illusions that the unionists will seek to break us – yet they will not succeed. I trust that Scottish people of intelligence will also realise the dangers we now face. So let us build bridges between our peoples, so that our strength and unity of purpose can defeat these new and dangerous philistines.

I turn now to the specific matter of the inclusion of Sianel Pedwar Cymru-S4C, the Welsh language channel-in Schedules 4 and 7. It is my contention that this body is wholly unique. It is unique because it was set up with a commission. That commission was that it should do everything within its power-indeed, its existence is based on this-to preserve the life and future of the Welsh language. It is unique also in relation to the scene that existed 28 years ago when it was set up, when there had for many years in Wales been a long, bitter campaign of civil disobedience and lawlessness against those opposed to a Welsh channel. William Whitelaw, a man of immense understanding, diplomacy and integrity, ultimately came to a compact with the Welsh people and said, “You will have your channel”. A legislative framework was set up that guaranteed funds for the channel that would be adequate for it to carry out its commission. Indeed, its independence was guaranteed by statute.

The viability of that channel is now challenged and jeopardised by the fact that that financial guarantee disappears. The independence is jeopardised by the fact that it is contemplated that it should be merged with the BBC as a very junior, meagre partner. Its independence cannot possibly be real in those circumstances; indeed, the major decisions may well be taken by the broadcasting trust in London.

I do not believe that I overstate for a moment the anxieties that are felt in Wales concerning that loss of independence. Indeed, if one looks at the statements made in the last few days by Channel 4 as to its grave anxiety with regard to its own independence, one can well understand why the Welsh body is so afeared of what might happen in this situation. The continued viability and independence of S4C is crucial to the very existence of the Welsh language. The Welsh language is spoken by some 580,000 persons, including three or four of us in this House. It is one of the oldest living languages in Europe-it stems back to its Indo-European origins about 1,500 years ago. It was a living language 1,000 years ago, when French was only a patois of Latin. In those circumstances, I ask the House to consider that it is part of its trust in relation to the Welsh language to regard the situation of S4C as being wholly unique. Parliament has the sovereignty to amend all the legislative structures but, in so doing, it would be reneging on the solemn compact that was made between a very honourable gentleman and the people of Wales 28 years ago. 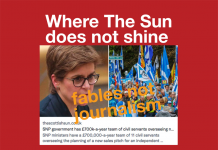