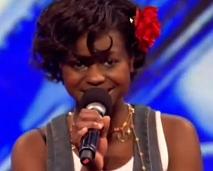 It’s the case that has gripped the nation.  A hitherto unknown individual is now a household name and it’s all down to TV talent show X-Factor and an unpopular Home Office decision.

Previously a relative nobody known only to a few locals, but these last couple of weeks Labour MP Gordon Banks has been all over the airwaves and newspapers urging Home Office officials to “bang their heads together” as former X-Factor hopeful Gamu Nhengu and her family face being deported from Scotland.

Mr Banks of course is the local MP, his constituency covers Tillicoultry where Gamu and her family live. The family came to Scotland under the the ‘Fresh Talent Initiative’ eight years ago and are now facing the prospect of being deported back to Zimbabwe after the Home Office refused to extend the visa.

Locals have expressed outrage at the decision and have launched an online petition http://www.keepgamuhere.org/  aimed at keeping the family in Scotland.

The furore began after Gamu was sensationally booted off the X-Factor TV talent show.  Viewers reacted with shock at the decision to axe someone many believed was one of the favourites to win.  There were suspicions that things were not quite right and within hours the media had got hold of a story suggesting the family were to be thrown out of Scotland.

Local MP Gordon Banks was quick off the mark expressing his concern at the situation facing the family.  Mr Banks was reported to have urged Secretary of State Michael Moore to look at the case and, according to The Daily Record Mr Banks “believes the family should be allowed to stay in Scotland”.

The Scottish Government has also joined in the battle with First Minister Alex Salmond himself calling for the Home Office to reverse its decision and to allow the family to remain.  Scotland’s External Affairs minister, Fiona Hyslop MSP, has also given her support by writing to Home Secretary Theresa May urging her to reconsider the deportation order as has local MSP, Keith Brown of the SNP.

It seems that everyone in Scotland is behind the family in their quest to remain in Scotland.

Well not quite, you see Gordon Banks view on the deportation order is not as clear as you might think.

Last Thursday (7th Oct) Mr Banks gave an interview to BBC Radio Scotland and the interview was remarkable for one thing; at no time was Mr Banks asked whether he supported the calls for the family to remain in Scotland.  The Labour MP instead expressed his concern for the administrative process and the fact that the media appeared to have been fed information on the matter before the family had been contacted, but not much else.

You can hear the interview here:

So, notwithstanding the fact that Mr Banks wasn’t asked if he supported the deportation decision, the impression given by media coverage in Scotland is that he is full-square behind the family and believes that they should be allowed to stay.  Just a shame that Mr Banks hadn’t such a high media profile when the Crieff family he mentions were deported.

And there it might have lain had it not been for those pesky interviewers from outwith BBC Scotland.  You see Mr Banks had, only the day before, given a similar interview to BBC Radio Five’s ‘Drive Time’.  And this time Mr Banks WAS asked whether he supported the families bid to remain in Scotland.

How did he answer? Well, he didn’t – he simply ignored the question.

Here is a recording of the interview, the quality is not perfect but it is clear enough to discern what is being said:

Now, leaving aside the privacy that apparently didn’t apply when being interviewed by Radio Scotland, Mr Banks reluctance to publicly back the family doesn’t mean that Mr Banks isn’t backing the family’s fight be allowed to stay, but it does raise questions given that he singularly failed to back their fight when given the opportunity to do so in a live radio interview.  In an interesting exchange when asked if he has been “fighting it” since 2008 Mr Banks quickly corrects the wording and replies that he has been “involved in this matter” since 2008.

Mr Banks again appears to be more vexed with the administrative process than with the actual strength of the family’s case.  Moreover the new leader of the Labour party, Ed Miliband, further muddied the waters when he also refused to back the family’s fight when asked to do so on Sunday’s Politics Show.  So, what’s the position of the Labour party?  Does the local Labour MP believe that the family are in the right and should be allowed to stay?

On Sunday in order to clarify Mr Banks position we sent the following email to his office:

The Daily Record reports that you support the family’s bid to remain in Scotland.  However in a recent Five Live interview when asked your opinion you failed to make clear whether you do indeed believe that the family should be allowed to remain here or not.  There was further confusion over Labour’s position today (Sunday) when Ed Miliband refused to say whether he supported the family’s fight.

So, regardless of the Home Office decision, do you believe that the family should be allowed to stay in Scotland?

Thus far Mr Banks has declined to answer our question, so we remain unsure of his exact position.

Meanwhile the fight to allow Gamu and her family to remain in Scotland goes on.  This is a fight where the Scottish government are clearly behind the family but are powerless to intervene, as immigration powers are reserved to Westminster.

But does their local Labour MP believe that the family are in the right and should be allowed to stay?  Well, if we ever receive an answer from Mr Banks we’ll let you know.

So far almost 6000 people have signed Gamu’s petition – if you would like to add your name then you can do so here: http://www.gopetition.com/petition/39599/sign.html