The people have spoken, the bastards

So said Dick Tuck in his concession speech following his loss in the 1966 California State Senate election. The outcome of the UK general election is not so straightforward. What the people wanted they got none of.

The SNP have big issues to address but so also do the Tories, and in this article I will concentrate on the yawning chasms within the British Conservative and Unionist Party.

Ruth Davidson has moved quickly to assert her influence, First demanding of May that she deal with the DUP attitude to gay marriage. May has promised to do so though she is incapable of delivering this reversal. The DUP are fundamental evangelists who have more in common with groups of the same ilk in the US than May’s Anglicanism. Secondly she is demanding autonomy for the Scottish C&U, with the implicit threat that if she does not get what she wants, her new band of 13 will wield the Davidson pitchfork over May’s fragile coalition of chaos. Thirdly she is demanding a Brexit settlement that includes membership of the Single Market and the Customs Union, stealing the Scottish Government’s clothing. Free movement is not a concern for Davidson, well aware of the potential damage to Scotland’s business interests and economy of a rigid and restrictive immigration policy.

Within the divergent pattern of UK unionism there is one link to the DUP who also want a Customs Union to maintain free movement over the Irish Border yet they back a hard Brexit, incompatible with free movement across the border. Meanwhile the tottering May has to contend with the troops behind her back, determined to have a full English Brexit.

May’s premiership is on life support. None of the tubes are firmly secured and she has different factions tugging at critical connections. If the election outcome suggested the union was stronger on the morning of 9th June, the reality is tensions within a weak government, held together with a rope of straw could fray rapidly, like a field of wheat ripped by a tornado.

May and Davidson have been talking day to day. Scotland underestimated Davidson. May has been seduced by a relationship in which she has not the hand she thinks she is holding. Davidson will push for her interests but also carefully pull back, smoothing things to keep the show on the road as it stumbles from pothole to pothole.

The big issues facing Ireland, with any kind of Brexit, are complicated by May being dependent on one of the main parties in Northern Ireland.  Being sodomised by the DUP is not a position May’s government can appropriately adopt as a one of the tripartite guarantors of the Good Friday Agreement.

The big issue for unionism is it has many faces and means different things to its supporters in the different nations of the UK.  The electorate is confused and tired of elections because that is the prescribed medicine to swallow and regurgitate.

Davidson has grasped the necessity of remaining in the single market, post election and Scotland’s need to maintain free movement. Not something the Tories mentioned during campaigning. This is a challenge to Sturgeon as the SNP also played down its pro Europe position during the campaign. Davidson sees her band of 13 sitting on the government benches as an internal challenge on behalf of Scotland’s interests, attempting to deliver what Sturgeon has not achieved.

They will meet hostility from English Tories determined on a hard Brexit. They have no experience of Westminster, will find plenty obstacles to trip them up as they seek to find their feet in new surroundings and, as yet, have no clear leader to keep them focused in a strange environment. Davidson will not be there to keep them in line.

Unionism is splattered across a canvas that depicts its fragmentation and disunity. We have much to work with.

So the fed up electorate delivered a hung parliament and the virtual certainty another election would be hurtling down the road in a Bluebird bus with no brakes before the year is out.

May’s head is hovering over the block. Davidson’s fingerprints will not be found on the executioner’s axe. Her unionism is not beyond blaming another election on English failures. The SNP, recovering from the loss of 21 seats, is ill prepared to face another election. Davidson would see that as a heaven sent opportunity to take another slice at the seats they narrowly missed.

MPs with single digit majorities do not have the luxury of a five-year term to rebuild their supporter base. Penny numbers are but hanging chards exposed to an advancing shredder when the election comes, as it must.

A clear trend is visible from the 2016 elections when the Tories ousted Labour to become the main opposition party. Ruth Davidson is in a hurry. Momentum thrives on continuous advances.

The SNP grew rapidly after the 2014 referendum. Like any organization facing significant growth it has become cumbersome and sluggish. The HQ organization looks in need of a restructuring to better communicate with the grassroots and the public seeking information. Failure to use strong narratives to motivate has weakened a party with a former command of events.

An army needs fed and equipped to meet the challenge of times that are changing. Unionism is fractured and fractious. That gives us much to work with. 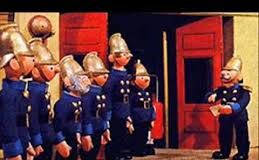