Where You’re Meant to Be is exactly what it’s tagline says it is:

A funny wee film about music and death.

Aidan Moffat tours Scotland with a selection of old folk songs he has re-written for the city. Perhaps predictably audiences in the more remote venues don’t take to him very well.

Keeping the choruses intact and with charming violinist Jenny soothing more than a few awkward situations, Moffat explores his ‘Scottishness’ in 2014 as he sarcastically remarks in the later narration.

There’s a sense that this film was intended as something wholly different. An examination of national identity and a reinvigoration of its culture at a time when the country was thrown into independence debate and forced reflection on what it means to live here.

The death of folk singer Sheila Stewart before the film’s completion adds an entirely new dimension. Having rewritten her family’s Parting Song as a sombre rehash of Arab Strap’s First Big Weekend, Moffat strikes a nerve in Stewart.

She’s furious when she hears it. It’s a song about death, and he made it about relationships and leaving Glasgow. The grief is still there, but the meaning to her is stripped away completely. Appropriated.

Her stubborn stance that the old songs shouldn’t be changed is, as Moffat sulkily points out to his band, against the history of the songs themselves.

But having been selected to carry on the Stewart family’s songs at a very young age, Sheila had to memorise those songs. She lived those songs. And they were traveller songs.

The footage of her performing The Parting Song with her aged mother contrasted with the shots of Sheila visited her family graves explains all her rage. 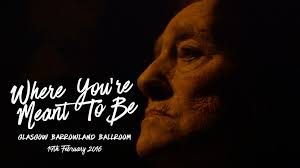 Retired from performing the songs would end as hers as she knew it, wrapped in her own memories of her life with them.

Aidan Moffat’s world of all night city benders and love lost on Sauchiehall Street is as much Scotland as Sheila’s world. A point he tries to bring home too much at times. Many of his audiences have never heard of him much as he hadn’t known about them.

Death and grief live in these towns and villages. The songs have memories already, it is the end of a tradition as the young flee to the city for work. But it’s not dead yet.

The film drives towards the final stop in the tour. The Barrowlands. The ballroom that hasn’t changed, the brown walls and original floor. It holds such a place in our hearts that it carries on.

There’s a panic every other month with rumours that the Barras is closing, or worse gentrifying.

But it’s still there. Still the same.

And this is where we’re meant to be.

All together under one roof singing together and aye drinking too much together. It’s at gigs there and around the country that we come together, we remember those lost and we smile at the uncertain future.

Aidan Moffat is both out of line and entirely correct to want to take these old traditions that aren’t quite his and make them relevant again to a younger audience. The big meeting places of our grandparents are gone. The cinema houses, the dance halls. Communities have made way for corporate giants and motorways. The new communal spaces are closing too for a lot of the same reasons, like the Arches the club Moffat went to and sings about.

Times are changing and we are upset at losing our histories just as Sheila is about losing hers. But they’re not gone yet. History is all around us in the friends we meet and share ideas with.

‘let’s drink and be merry
all grief to refrain

for we may or might never
all meet here again’

Not much of Sheila’s life is explored in the film, giving little away herself. I had never heard of her and she was a fascinating woman, lecturing at Priceton and Harvard, receiving a MBE for her contribution to Scottish traditional culture. She sang in the White House and for the Pope. She was a story in her own right.

But there is no film without her. And her death adding the intelligence of hindsight to the events of the tour. Maybe they needed each other to prompt a bit of reflection in changed days.

I won’t tell you if she makes it to the Barrowlands in the end.

You’ll see it in her from the start.

She’s not gone yet.

Colonel Mustard & the Dijon 5: Dispensing the right opiates for...