Professor John Robertson turns his attention to the local press

The part played by local, often weekly, press, in informing local populations in the run-up to elections is less well-studied by academics than are TV and Radio news or the national press.

Yet, a local newspaper like the Ayrshire Post has a readership, in the Ayr Carrick and Cumnock constituency and part of Central Ayrshire, far exceeding that of most other newspapers and challenging closely, in that area, that of the Scottish Sun and the Daily Record.

Evidence of media effects regarding news reporting and voting behaviours is extremely weak. This is true regardless of medium. The only evidence of any observable impact is that which derives from news media ‘emphasising’ bad news, especially about the economy. Generalised anxiety is now commonly associated with news media consumption in the hyper-capitalised ‘West’ (see the book Spirit Level).

The voting patterns of older people when given negative news relating to pensions or to the jobs of their younger relatives, as in the recent referendum in Scotland, may illustrate this. The result, in voting behaviour, is likely to be ‘conservative’, that is supporting incumbents rather than voting for change, out of fear. 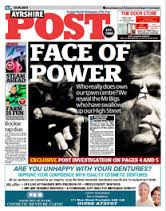 The Ayrshire Post and the Ayr Advertiser serve the politically mixed population of the town of Ayr, it’s ‘satellite towns’ of Prestwick and Troon as well as the villages and countryside around them. Though the Post was founded in 1880 to represent Liberal politics against the Advertiser’s then Tory loyalties, neither paper has a coherent, or clearly aligned, ideological position in the 21st Century.

Both Parliamentary constituencies are currently strongly held by the Labour Party though the area is one of Scotland’s few Conservative heartlands with representation for them in local and Scottish government and has been an historically weak area for the SNP. 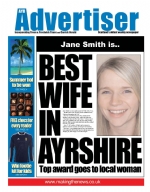 This research study concerns itself only with the service provided to the local population in terms of information on the participants and their policies as these might impact on the lives of the former.

Note: This paper is offered in a journalistic style. Research evidence for the assertions of, for example, media effects, can be found by readers themselves or by sending me an email to ask for them. Several are in my published research papers.

This is not a like-for-like comparison of the two newspapers as they have chosen to approach coverage differently. Consequently my first purpose is to evaluate the Ayrshire Post’s coverage, on one day (3rd April) in terms of the parties involved. Comparison with the Advertiser is of some interest and is considered but is not the prime purpose.

1: How fair is the coverage of the five main parties in terms of quantity of text and images?

So, there is an imbalance between the Labour Party and the SNP and a further imbalance between the SNP and the others, creating fairly clear bias of one kind, if repeated over several weeks. With taller headline lettering and the addition of one quite large photograph (110mm by 80mm) and one smaller, positioned higher on the page than the SNP item, the Labour Party item has much in its favour before we look at content. This is, of course, the picture on one day. Data collected on the next edition (10th March) will add to the value of the analysis.

* Further analysis reveals that 9 of the 15 sentences in the piece about the SNP are actually from their Labour opponents.

2: How fair is the coverage of the five main parties in terms of quality of text and images?

The top of the page banner features a 45mm by 25mm Union Flag. Under the headline ‘Labour brings big gun to start race’, The Labour Party piece is entirely uncritical though recognising the threat from SNP candidates. Mostly it consists of mutual praise between former PM Gordon Brown and the two Labour MPs including references to the achievements of both and of the Labour Party generally.

The larger picture features Brown and local MP Osborne round a statue of Labour Party fonder and hero, Keir Hardie. In the text Osborne compares Brown with ‘Labour legend, Keir Hardie’. It can be left to others to comment on this.

The SNP report is, is by contrast, extremely negative. The headline, ‘Nat ‘hiding from hustings’ is characterised by both a disrespectful ‘Nat’ rather than the correct ‘SNP’ followed by a suggestion of cowardice. The contrast is extremely marked. The content sails very close to gender-bias and bullying. SNP candidate, Corri Wilson, is accused of: hiding, failing, and being too quiet for Westminster.

Where in this report is the response that Westminster might benefit from a quieter style if it had more of Ms Wilson? Ms Wilson’s opponent, Sandra Osborne, actually makes or is reported to have made 9 of the total of 15 statements in the report on the SNP. The actual overall ratio of Labour to SNP sentences, in the Election Special, is not as above in the table, 17:15 but is more accurately a highly imbalanced ratio of 26:6.

The Conservative Party, at the 2010 UK Election, in Ayr, Carrick and Cumnock, won 1 in 4 of the votes (25%) coming second to Labour. While newspapers are not obliged to represent local politics fairly, the almost complete neglect, above, of one party representing so many locals is astonishing, if not offensive.

Looking at both the Labour/SNP and Labour/Conservative representation, offered on Page 10 of the Ayrshire Post on 3rd April 2015, we can see an extremely biased picture which suggests underlying political preferences producing propaganda of a type that might even shock the Labour-linked leadership at BBC Scotland. At this level, this kind of anti-democratic behaviour needs more than scientific assessment of an objective nature and requires, to my mind, the assessment ‘immoral’.

On March 31st, the Advertiser did not have an election special but featured two large political items, side by side on pages 4 and 5

First, was a 10-sentence report on a meeting where Gordon Brown turned up to support ‘embattled’ local MP, Brian Donohue. As in the Ayrshire Post report, the piece was uncritical, at times hagiographical (saint-worshipping) but we were spared the association of Brown with Keir Hardie, a comparison which might only damage the health of retired Ayrshire miners.

The second piece of 13 sentences, two photographs and only one typographical error in the headline, on the unveiling of a cash boost for the Gaiety Theatre, was likewise merely descriptive and had no debate on the worthiness or otherwise of such spending.

As many are aware there is another kind of bias or lack of bias, the kind that is not even there and yet that by its absence, it somehow still matters.

The Ayr Advertiser was a bit light on politics at this time and a bit too sweetly descriptive to be informative but, more than that, it did not indulge in anti-democratic, borderline bullying of a female candidate, in an attempt to weaken her chances of election. I don’t know the paper well-enough, yet, but if it’s their form not to indulge in that kind of thing then, there’s hope.

As for the Ayrshire Post, a very bad start indeed and evidence that you need watching.

Part 2: Nat comes out of hiding but gets no apology?

On the 10th April, after complaints from the local SNP, the Ayrshire Post offers no apology. The damage is done anyway, you might argue. Two articles are headlined – ‘Any time, any place: Corri – I’m not running scared’ and ‘Nats blast Sandra call.’

There’s also a wee piece with only six  sentences and no photograph for the Conservative candidate. Bear in mind the Conservatives are quite a force in this area. Most noticeably there are two very large photographs of the combatants taking up about 40% of the space. Why is this? Not enough text? If it’s the latter then it’s a pretty disappointing level of political engagement.

Both pieces were extremely low in information value and concentrated on reporting or fetishising over a part-personal, part SNP/Labour spat. This is a self-proclaimed ‘Election Countdown’ page with adequate space to explore issues of concern to voters but with no apparent desire to do so.

Instead we get 28 sentences almost entirely about the personal attributes of one of the candidates, repeated from the previous week, her refutations and the alleged failings of a different SNP politician. Though the SNP candidate is allowed to defend herself, there is no printed apology from the editor for the poor standards in reporting described above.

The reporter repeats the accusations against the SNP candidate so as to allow the defence to make sense. This repetition of the Labour candidate’s slurs, regardless of the denial, plants or feeds them again in the minds of those who first read them a week before. The damage is first done and then doubled under the pretence of given a right of reply.

The Ayr Advertiser doesn’t seem to be ready to talk about the election yet or maybe they think local newspapers should deal with local issues. I’m not averse to that idea. There is one political piece and it’s an informative report on appointments to South Ayrshire Council’s Audit and Governance Panel. The reporter allows the participants to tell the story from the inside but keeps the whole thing balanced and in the end non-judgemental.

The Ayrshire Post has “previous”, as the police say. Their ‘Beggar Off’ front-page aimed at High Street beggars triggered a protest outside their Ayr office.

The story was widely reported across the UK media .

The Post’s ‘Beggar Off!’ splash headline is surely right down there with those tabloid classics  ‘Gotcha’ and ‘Serbs Them Right’.