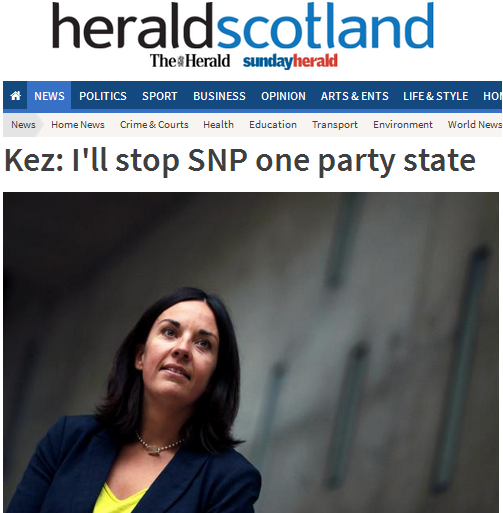 The Secret Diary of Kezia Dugdale, aged 10 and three quarters, as told to Citizen Cuddis, her very very bestest friend in the whole world, c/o The Universe.

I am more excited than a tantric sex addict with a free afternoon and a promiscuous partner with low self-esteem and an even lower IQ. (Promiscuous is a good word. I will write it up in my vocabulary jotter under the other big words I have learned on my trip to the BBC studios to take part in Question Time last week).

I really wanted to go to a petting zoo instead like my Spad promised. I reckon they probably had an invitation for a real politician but the postman got all mixed up trying to work out Slab’s stance on Trident, which has, incidentally, gone up in value to £167 billion! We can use that extra money to repair the damage done to the Scottish economy by Nicla and her bully-boy chums from P7. Between you and me only, I heard that if you are on Question Time you get a bumper bag of Haribo and a clutch of Kinder Eggs to take home afterwards. Woo hoo! That cheered me up.

Everybody on the panel seemed to have a triple-barrelled name. There was that old grand dame (or should that be old pantomime dame?) and ancient Scottish Tory, Anna Belle-Toldie. And then there was Bill E. Bragg and Mimsy Merrill-Penny-hasn’t-dropped. I think she is a hack. She was doing a lot of boo-hooing about the collapse of a couple of Scottish papers and saying how the steel workers could go poop their collective pants for all she cared because nobody was helping her fellow scribblers get over the collapse of their industry.

Bill E. Bragg told me that ‘she hasn’t yet linked the collapse of her trade with the public’s growing awareness that what her chums and their ilk pump out daily is the journalistic equivalent of agricultural slurry’ (That’s another great word, ‘ilk’. Though it is possible Bill E said ‘whelk’. I wasn’t really listening. I will write both words into my vocabulary book when I get over all this excitement).

Lucky for me I brought my vocabulary jotter and a freshly sharpened pencil actually because I can tell youse right there, then and now that there were some big words leaping about that studio like a scalded polecat. There was ‘disenfranchised’ for a start, which is what it is called when you catch dysentery in France I think.

At one point, I nearly wet myself! Somebody actually asked what I thought about something. OMG. I was like, no way! I told them—I said, look everybody, Jeems (that’s my boss) has had to put up with hostile press raking through his bins. So don’t start with me. Ha! That fixed them.

We got to look dead dead serious on topics as tremendously exciting as the Chilblain Inquiry. I got to say something about that as well (It really was exhausting). I felt so grown up, I nearly forgot all about feeling sad about not going to the petting zoo. Maybe I’ll have more time to stroke a goat after the 2016 elections.

Everybody listened very quietly while I made a complete radge of myself by saying that the two million words in the Chilblain Inquiry’s report was an awful lot and it would take absolutely ages to actually read, even for a grown-up.

My Spad tells me that this is time better spent holding the SNP government’s bottom to the fire over the 99% of Scottish children that leave school unable to hold a copy of the Beano the right way up, most of them having waited over four hours in A&Es to have their legs straightened after SNP Baaad’s school meals policy gave them the rickets! Baaaasturds !

At one moment the audience couldn’t even keep up with my dazzling political insights. In a studio with more live mics than a Barrack Obama press conference, there was utter silence. I could hear the wind whistling through my ears. My Spad says this is as rare as a total eclipse of Pluto—the silence on QT that is, not the wind whistling through my empty cranium; she says that’s normal. Sometimes I think my Spad has an attitude problem.

The thunderous silence that greeted what will no doubt become known as my ‘Two Million Word Speech’ just goes to show how stunned the people of Scotland are to learn that our polis are shite. (The Spad tells me this is called non-secateurs and that I am good at them. Don’t worry, it is in the book!)

To pass the time between writing down big words I kept an ear out for interesting facts. You learn something new everyday they say. Isn’t that profound? I learned on the show that SNP Baaad people intend building a fourth road bridge! Haud the tram, I said. When did they build the first three? They kept that quiet – probably sold it to Donald Trump and the Chinese, I’ll bet.

A man in the audience was whining about SNP Baaad people’s failure to use Scottish steel to build all these bridges until the SNP Baaad spokesman on the panel pointed out that we hadn’t made that kind of steel in Scotland since Bruce ate a spider. Ha! That sorted him out.

I did have a little cry near the end. I had rehearsed a small tantrum about SNP Baaad people wasting our hard earned money—money from hard-working poor people who should be left alone to shoulder the blame for the banking crisis while real citizens squander their greatly enhanced inheritance money on adopting leopards and pony trekking in the Algarve. My Spad says this is a Tory story but I liked it because it had leopards and ponies in it. I’m in charge of this party, Spadders, I said. Don’t give me any more of your Spadditude!

I starting getting really bored when Anna Belle started banging on about some theory she had to explain why poor people should taper their poverty over the lifetime of this parliament. Though poorer by £1300 when the changes kicked in, other changes to stuff and things over the next five years, would eventually ensure that malnutrition was at its highest watermark since the Black Death hit town she said. And everyone knows the Black Death was caused by excessive socialism in the 1960s, obviously.

Boooring! High wage, low tax, broad church, Charlotte Church. Whatever! I tweeted Jeems under cover of my colouring book. I told the old grandad chairing QT that I had voted for Yvette Cooper because her first name sounded desperately romantic. Yet I am 87.4% behind JC. I went on to whisper to Jeems via my Samsung Galaxy 6.0 that I didn’t join the Labour Party to stand idly about on doorsteps while the SNP, after eight years in office mind you, wasted their time chasing Independence. I joined the Labour Party to stand idly about on doorsteps while Gideon and the rest of his clown-car Treasury passengers impose their increasingly Cockamamie policies on the vulnerable for the betterment of the well-off. No sir. Or my name isn’t Jackie Jenny, or Whatever.

That’s it folks. I’m off to finish my colouring in. Laters..!

A New Year message to foreigners from Mother Theresa