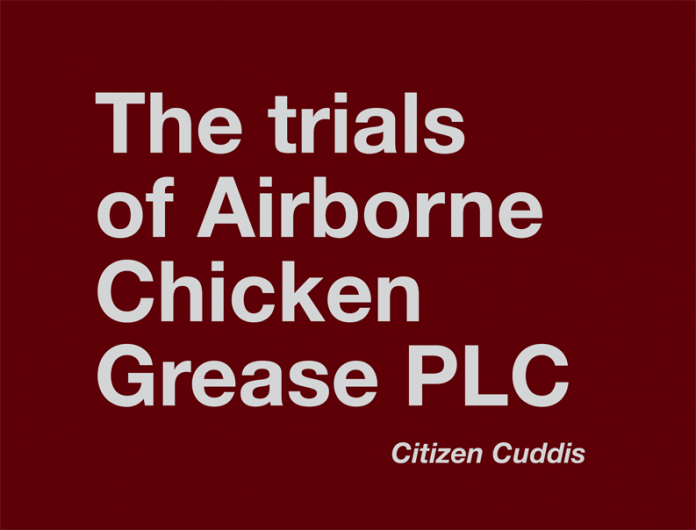 While most of us pull on our Nanook of the North, Arctic-Defender jackets, and two pairs of the wife’s discarded tights to stave off Brexit-related hypothermia, we are encouraged, through life-long conditioning, to shed a tear for the less fortunate.

But according to the DWP, we can cheer ourselves up by dialling down our selfish fears and feeling sorry for those with their snoots so deep in the taxpayer-funded trough that they have to breathe through their rectum (an old jazz trombonist’s technique). Because it’s tough for them too, you know. You try boarding a gravy train with your snoot buried in pig-swill and see how easy you find it.

Announcer: “The next gravy train is due shortly at platform six”

Airborne Chicken’s profits rose exponentially despite their proffered solution — fifty thousand wick-less candles — as useless as a single knitting needle. Of course, the wicks should have run through the centre of the candles, but the company ran out of money; thirty-five billion doesn’t go far nowadays. This catastrophic waste of taxpayers’ money stood out like Jacob Rees-Mogg dancing the mashed potato during an illegal rave, exposing Airborne Chicken as it did so, to unwelcome publicity.

Pablo’s Pension Pot
But if you can’t quite feel Airborne Chicken’s pain, why not console yourself with the thought that the most recent profit report from BP makes Pablo Escobar’s retirement fund look like pocket change. Yet their chief financial officer, Murray Auchincloss, recently told investors: ‘We may be getting more cash than we know what to do with,’ a phrase never uttered by a UC claimant. We can only imagine the impact on Murray’s mental health, as he struggles to identify stuff to buy with the spoils of his company’s profiteering.

Heinous Anus
If none of the preceding opportunities to empathise with the better-off brings a smile to your lightly frosted face this winter, at least let your heart go out to the monarchy. This year has been annus horriblis II for the firm. Yet, issuing a commemorative coin to mark the nation’s current state, with ‘Heat’ on one side and ‘Eat’ on the other, will surely be welcomed by all coin-tossing enthusiasts unsure how to decide which option to go for of a morning.

If the plight of our nonagenarian monarch still doesn’t melt your heart, then there’s no hope for you. While nobody was watching, you most likely signed up to the namby-pamby do-gooder wing of the let’s-just-give-each-other-a-bosie brigade with its loony-left notion of building a society founded on the well-being of its people. I mean, what next?

Singed Oxters
People like you care more that energy providers not already driven out of business by spiralling gas prices will soon announce household-budget-busting price hikes. Increases that will force nearly all of us to rip out our radiators and sell them for scrap to plug the black hole opening up because of the threatened sky-rocketing of National Insurance charges.

You’ll be the hand-wringing sort of cove frowning over the stone-cold certainty that parents across the land may soon have to spend the fag-end of this winter hugging their basement boilers so closely that there’s a danger of singeing their oxter hair. Their weans — duffel-coat-swaddled and scarf-muffled — pressed around them, will sing songs from Frozen to the rhythm of their ma’s and da’s chattering teeth. Only your sort could see such family bonding in a negative light.

Hunter-gatherers
In your Communist-tainted opinion, hunter-gatherers trampling barefoot through thorn bushes in pursuit of a tapir for Sunday lunch faced less of a challenge than those on Universal Credit at the moment. But surely they can manage to scrape together enough change from the back of the settee to buy a packet of Haribo for the kids’ tea, can’t they?

Avoid self-pity
Readers with a backbone, making an effort to cheer themselves up thinking of the plight of the well-to-do, may still discover stray thoughts leading them to ask, ‘Where’s mine, guv?’ Dry your eyes and turn to the DWP Playbook (£18.99 from all good bookshops) for hacks like the following:

‘Each month, set aside 5% of your Universal Credit payment in a jar. And before you know it (in one hundred thousand years, eight months, three days, and twenty-two minutes precisely, you’ll be a millionaire!’

As the saying goes, rather than curse the darkness, light a candle — just make sure it has a wick.