Commentary: Earlier this week Derek Bateman gave a qualified welcome to the arrival of Kezia Dugdale as Scottish Labour leader. Here G.A. Ponsonby provides the counter-argument to the impact of her election.

In June I published a blog commentary under the headline “The sooner Labour in Scotland is extinct the better”, giving my reasons for wanting to see the back of the Labour Party in Scotland.

Since the SNP shocked the Labour party by winning the 2007 Scottish election, Labour in Scotland has been no more than a guerrilla organisation out to sabotage the SNP administration for fear support for independence may rise.  The Edinburgh Trams and Minimum Pricing for Alcohol spring to mind.  The attempt to use sectarianism at football was more evidence of a party out to undermine through any means possible.

This is a party not of opposition but of sabotage.  Scottish Labour’s main goal is not to regain power but to ensure that the SNP does not succeed in its bid to maximise the power of Holyrood.  If Kezia Dugdale wanted to end what she called a one-party-state then what better way to do it than to adopt policies that will ensure voters are attracted to her party.  Adopting Devo Max would be a start.

Scottish Labour isn’t interested in what’s best for Scotland.  It has become nothing more than a pro-Union guerrilla group.  It cannot change.  It will fight to maintain the Union in its current form until it is extinguished.

We have to ensure this entity never again recovers in Scotland.”

Nothing in the ensuing eight weeks has shifted that opinion. The election of Kezia Dugdale as the latest puppet in charge of the powerless branch office is merely confirmation that the party will continue as before.

In the hours immediately after May’s general election I opined that Kezia Dugdale could steer the party from extinction to resurrection.  The humiliation of Murphy was the chance for her to distance herself from the deluded street-ranter and to set the Scottish party on the road to real autonomy.

That was dashed when Dugdale immediately set about aping Murphy himself on the day she launched her leadership bid.  Her accusation on June 20 that the popularity of the SNP had rendered Scotland a “one-party state” was straight out of the Jim Murphy/John McTernan handbook. 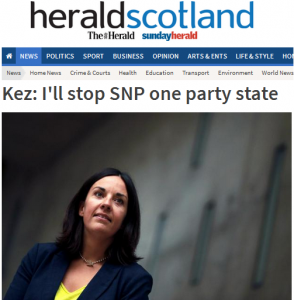 Her subsequent election as leader of the non-existent beast known as ‘Scottish Labour’ witnessed her utter a meaningless phrase – ‘Labour Values’.  It has peppered interviews since.  But what exactly are these values Dugdale espouses?

Well, backtracking seems to be one.  At the start of August the soon to be leader of Labour’s Scottish branch gave an interview to the Guardian newspaper.  In the interview Kezia Dugdale said the following of Jeremy Corbyn.

“There are loads of people [in the Labour party] who are quite prepared to say ‘Och, it doesn’t matter if he doesn’t look like a prime minister, there’s someone who’s authentic and says what they believe’.”

“But I want there to be a Labour government; otherwise I’m wasting my time. I don’t want to spend my whole life just carping from the sidelines.”

“So you have to convince me that he can be [prime minister]. Here’s a guy that’s broken the whip 500 times. So how can the leader of the party enforce discipline with that record?”

No sooner had she attacked the idea of Jeremy Corbyn ever becoming prime minister than Corbyn-mania gripped her party.  The left wing MP with his principled belief in traditional Labour values has surged into the lead in the UK Labour leadership contest. 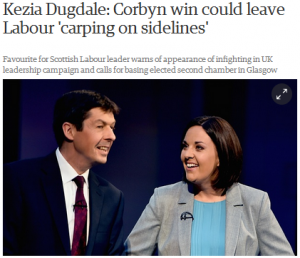 Dugdale’s response to Corbyn’s growing popularity was to backtrack on her earlier criticism of Corbyn.  How very principled.

Her idea of opposition is apparently to use the NHS, Education and Police Scotland to attack the SNP.  She said so in a recent BBC interview.  This is precisely the politicking that has led to the party’s demise north of the border.  Dugdale will continue where her predecessors left off.

Dugdale is an unreconstructed British Nationalist.  In an interview on the BBC before her leadership win she defended her party’s alliance with the Tories during the referendum as “the right thing to do”.

Her enemy is the SNP, not the Conservatives.  Indeed only this weekend she was defending the Tories funding of the NHS in England whilst simultaneously attacking the SNP.  According to the Labour MSP, the Tories are spending more on the NHS than the Scottish Government.  Who, apart from the most died in the wool British Nationalist actually believes that?

On the Monday after being elected Dugdale asked voters for a chance to be heard.  She asked them to take another look at the party.  I can save them the trouble.  Scottish Labour is the same Unionist wrecking ball it was under Iain Gray, Johann Lamont and Jim Murphy.  It has nothing to offer today’s Scotland but smear, fear and falsehoods.

I predict that Kezia Dugdale will be the worst leader of ‘Scottish Labour’ we have ever seen.  Let’s hope she kills the party stone dead.

Brexit-inspired crisis may demand a break from ‘normal’ politics

One nation Scottish Toryism supplanted by the cold stridency of Ruth...