Scotland has changed, and things will never be the same again. How many pundits have you heard saying that?  You can’t pick up a paper or turn on the TV without being confronted with a talking head jabbering on about political engagement and a tide of change.

I don’t know if there is evidence of any meaningful change. I know that polls currently suggest the SNP is on course to trounce Scottish Labour in the UK general Election, but we’ve had similar polls before and, in Scotland at least, Labour always seems to get the vote on the day.

As ever, the talking heads and professional pundits ignore the elephant in the room when discussing Scottish politics – the BBC. Devolution didn’t change the BBC in Scotland, the SNP’s 2007 win didn’t change it, the nationalists 2011 historic majority didn’t change it either. The referendum even saw the BBC regress into a pro-Union colonial broadcaster.

BBC Scotland will alter this UK General election, at least in Scotland, of that there is no doubt. Whether the corporation can arrest completely the SNP surge remains to be seen, but it will try. 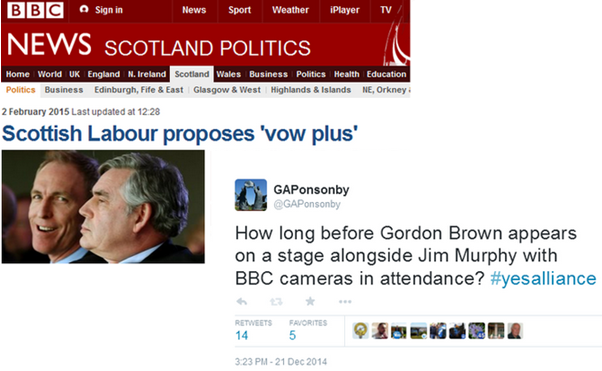 On December 21 last year I predicted (above) that Gordon Brown would appear alongside Jim Murphy with BBC cameras in attendance.

On Monday, 43 days later, Brown and Murphy appeared together in front of BBC cameras.  BBC Scotland and the Scottish Labour party really are that predictable.

The meaningless waffle that was packaged up as ‘Vow Plus’ wasn’t scrutinised in any meaningful way, it was just broadcast over the airwaves.  Has nobody noticed that a key plank of the Smith Commission – full control of income tax – is backed by Murphy but opposed by Brown? Did anyone witness Brown being subjected to the same forensic examination SNP politicians routinely endure?

Of course not.  The ‘Vow Plus’ event was given high profile coverage by the BBC because that is what the corporation’s job is.  Expect more of this type of ‘news’. 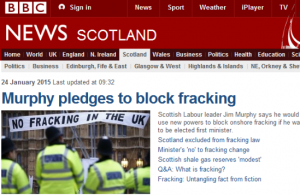 Similar coverage has been afforded Jim Murphy as the Labour MP has embarked on a strategy of issuing calls for changes that are already about to be enacted [through the campaigning of others].  I’m thinking of the decision to scrap the Women’s Prison and fracking.  Murphy’s input had nothing to do with the prison decision but it was presented by BBC Scotland as though his calls had forced the hand of the Scottish government.  Similarly, the MP’s pledge to block fracking in Scotland was headlined whilst his refusal to attend a Westminster vote which would have banned it across the UK was ignored.

The East Renfrewshire MP has also embarked on a strategy of adopting policies which he previously opposed.  Did you know that Murphy, prior to the last general election, announced his support for the lowering of the top rate of income tax?  The Labour MP has now altered his stance, but nobody – certainly not the BBC – is going to highlight this.

BBC Scotland is on general election mode and the usual stories are now being pushed.  It’s why statistical irrelevancies that are Accident & Emergency waiting times are turned into major ‘NHS Crisis’ stories by BBC Scotland.  Jim Murphy appeared on Reporting Scotland using A&E waiting times to attack the SNP.  The BBC Scotland cameras filmed the Labour MP outside my local A&E department at Monklands hospital – which his party had wanted to close.

It’s why the low-brow radio phone-in programme Morning Call promote this NHS ‘doom and gloom’ narrative by encouraging people to phone-in with their tales of woe in the waiting room.  What possible public service did this show provide?  What next, tell us about having your teeth pulled? 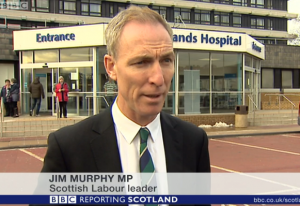 You’re going to see more of this, lots more.  I also sense a move to use education as a means of attacking the SNP.  Don’t be surprised to see headlines suggesting strike action by teachers is on the cards. 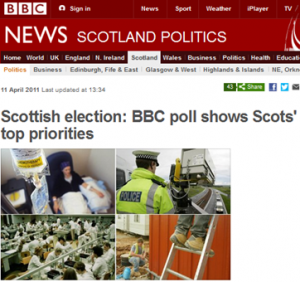 There seems nothing BBC Scotland will not do in an effort at preventing the destruction of the Labour party in Scotland.  Remember the “poll” the BBC carried out just before the 2011 Scottish election which found Labour’s policy on cancer waiting times was the “most popular”?  It set the news agenda for days and even led to Scottish Labour modifying its election strategy.

BBC Scotland doesn’t reflect changes in our society, it sets itself up as a barrier against them. BBC Scotland is going to go after the SNP because that is what it does.

If our professional pundits want to ensure the increasing political engagement is meaningful and leads to change, then they have to take the BBC on – collectively.

Nothing has changed.  Not yet anyway.

Jim Murphy secretly ‘led Tories and LibDems’ against referendum in 2009