I once read a hilarious book, ‘The Meaning Of Liff’, written by the late Douglas Adams and John Lloyd.  It was a spoof dictionary which used obscure place names from locations around the UK and applied wholly bogus meanings to them.

I still recall my favourite such word – Pelutho: (noun) A South American ball game. The balls are whacked against a brick wall with a stout wooden bat until the prisoner confesses.

Words or phrases can have a variety of meanings with context, situation or tone causing listeners or readers to infer different intentions or feel different emotions. A good example would be the phrase “come on”.  It can mean “hurry up”, it can be an invite or it can be a signal of disbelief.

Context can be all. A gambler who shouts “come on” as he or she implores their horse to run faster is unlikely to be using it in anything other than frustration and perhaps dread at the thought of losing money. This is altogether different from a mother who gently calls “come on” to a tardy child who has become momentarily distracted.

It brings me to the subject of this particular article. How the media can manipulate and stir negative emotion through subtle use of words or phrases.

The word “migrant” is a case in point. It has been used by many UK media outlets to describe the people who have left their homes in order to take perilous, sometimes life-threatening, journeys in order to find sanctuary. The word has been used almost religiously by BBC presenters across the UK. The favourite phrase when reporting on the humanitarian catastrophe unfolding before our eyes is usually “Migrant Crisis”.

It appears in online articles. Presenters use it when tweeting upcoming news reports and it peppers news broadcast bulletins.

The term, in the context it is being used and against the backdrop of images of dead children washed up on a beach, is offensive.

SNP MSP Christian Allard has taken to Twitter in order to protest at the continued use of the term by BBC presenters.  His repeated protestations resulted in him being accused of trolling by one BBC Scotland reporter.

In another exchange he challenged BBC Scotland presenter Sarah Smith on the use of the word “migrant” to describe refugees. Smith responded by claiming people were determined to apply a pejorative meaning to the word when there was none.

Later the same presenter claimed that because not every person seeking a new home was a refugee then the term “migrant” was an accurate collective noun.

Smith’s tweets followed a similar defence of the use of the word “migrant” during a discussion on Scotland 2015, the current affairs show she presents.

What Sarah Smith appears to have missed is that the term “migrant” has been hijacked. The word, as used by right wing sections of the UK media, is redolent with negative connotations. Migrant is fast becoming a de-facto term to describe people who are coming to the UK in order to take advantage of our welfare system, they are spongers. They are provided with shelter, so are taking houses from local people. They work for a pittance, so are putting people born here out of work.

Migrants have become the new Muslims. They are not to be trusted. Indeed by using the term “migrant” we effectively dehumanise them. They become the “swarm” described by David Cameron.

Migrant has, like the word Pleb which meant the common people in ancient Greek, has become a derogatory term.

Now I don’t for one moment believe that BBC Scotland presenters are deliberately choosing to use the word ‘migrant’ because of its derogatory meaning. It may in fact be technically correct when seeking to describe people migrating en-masse. But that isn’t the point. The fact is they should realise the negative connotations that are now associated with using it. How difficult would it be to describe these people as refugees?

The truth is that it is all too difficult. BBC Scotland is not an autonomous entity. Presenters like Sarah Smith and Gary Robertson must use the term because their London-based bosses have decreed it.

But the use, or misuse, of words in order to manipulate emotion is not a new phenomenon at BBC Scotland.

Supporters of independence will recall that prior to the referendum the SNP had to submit a dossier to the BBC Trust in order to prevent reporters using emotive and negative terms when describing independence.  It was not uncommon to hear independence being described as “separation”, “divorce”, or the technically incorrect “Break-up of the United Kingdom” by some BBC reporters.

Wordplay was also evident recently when Alex Salmond hit the BBC headlines after a spat with former BBC editor Nick Robinson. Take a look at the headlines below and note how Gordon Brown is described as a former PM, whereas Salmond is merely the former SNP leader.

This description of Alex Salmond was used by newsreaders on BBC Scotland during broadcast reports of his row with Nick Robertson. Brown is always described as the former Prime Minister. The manipulation thus denied Salmond the parallel status of former First Minister.

The public can be manipulated through clever use of language. It’s been the main tool of propagandists throughout the years. I’ll leave you with two examples of how BBC Scotland recently employed wordplay in order to manipulate the reader.

During the general election campaign, an SNP candidate hit the headlines after posting what the media claimed was an offensive message on twitter. Neil Hay, using his pseudonym Paco McSheepie, tweeted the following: “Prizewinners celebrate success at this year’s Scottish Quisling awards” 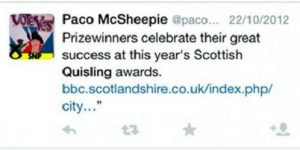 On the face of it, a clearly inappropriate message for a prospective MP to post. It led to attacks on Hay from Unionist opponents and almost certainly cost him the seat. The media gave the story considerable coverage.

“Neil Hay, who is standing in Edinburgh South, referred to supporters of the UK as “quislings” on Twitter, under the pseudonym ‘Paco McSheepie’.”

In news bulletins BBC Scotland presenter Glenn Campbell repeated the claim that Hay had called people who had voted No in the referendum “quislings”.

But the story wasn’t as was being reported. Hay had indeed posted the tweet, but he wasn’t posting his own views. The SNP candidate had posted a link to an online satirical site called BBC Scotlandshire. The tweet contained the headline from a spoof article. At no point has Neil Hay called No voters “quislings”, as had been reported by Glenn Campbell.

MacAskill tweeted the following message: “Scenes we’d like to see: the refugees Nicola invites into her house are Daesh moles.”

The message followed a radio interview in which First Minister Nicola Sturgeon had said she would be willing to house refugees fleeing from tyranny and war. Daesh is the name given to the terrorist organisation which calls itself Islamic State.  Within a day of Wings Over Scotland highlighting the tweet, McCaskill had been suspended by his party.

Yet here is how BBC Scotland reported news that the Conservative councillor had been suspended:

“A Conservative councillor has been suspended after posting a joke on Twitter about ‘moles’ from Islamic State moving in with First Minister Nicola Sturgeon.”

How exactly did BBC Scotland know the tweet from McCaskill had been a joke? There was nothing in the tweet suggesting mirth had been the motivation from the Conservative politician. The reporting of McCaskill’s tweet was markedly different from the reporting of Hay’s tweet.

But there was something even stranger when one looked at the image used by BBC Scotland in the online article. It was an image of a tweet by the Conservative councillor, but it wasn’t the tweet in question.  Below is what readers of the article saw on BBC website. 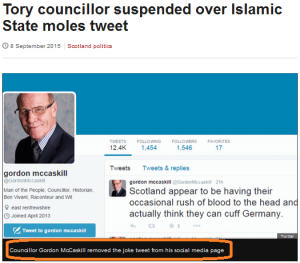 The tweet is a reference to the Scotland versus Germany football match, why it is used is not clear. Anyone clicking on the article may have considered it not worth reading having seen the “joke tweet” in question. Also note the caption beneath the image which says “Councillor McCaskill removed the joke tweet from his social media page”.

Denying Alex Salmond his status and downplaying a tweet from a Conservative councillor are not the worst examples of BBC Scotland’s dubious approach, but it is indicative of an institution that cannot be trusted to be balanced.

The “joke” tweet from Gordon McCaskill brings us neatly back to the original issue which was the use of the word “migrant”.  You can be sure if we had a devolved BBC Scotland we’d be discussing not the “Migrant Crisis” but the “Humanitarian Crisis”.

Note: I am currently discussing the possibility of turning my book ‘London Calling: How the BBC stole the Referendum’ into an hour-long documentary. The project is at an early stage and outlines are currently sketchy, but if and when it turns into reality then the filmmaker will launch a crowd-funding appeal.  If the editor allows, I’ll announce it on Newsnet.

In the meantime, please watch the short video below for a flavour of how the introduction to such a documentary might look.