On BBC 1 News at 1pm and again at 6pm, we saw extensive reporting of several crises in the English NHS. Headlines covered, in particular, failures in discharging the elderly to free up beds for incoming patients and a staggering account of a failure of one Mental Health Trust to investigate more than 1 000 deaths.

The figures had been released that morning and, as you would expect, made it on to the 1pm News on BBC 1. Interestingly, the report noted more than once that only NHS Scotland had improved and had the best results in the UK. Naively, I thought we’d get more detail on Reporting Scotland.

BBC Scotland seemed to have slept in, though, as they failed to report on the Scottish figures or, for that matter, NHS Scotland’s improved performance at 1.15pm. It’ll be on at 6.30 then? Nope.

Instead, Reporting Scotland at 1.15 and again at 6.30, headlined on repairs to the Forth Road Bridge. It was a technical piece about how the crack would get a splint followed by the debate in Holyrood, where BBC gave generous time to all three opposition leaders to try to lay the blame on the SNP. Now, Reporting Scotland had already headlined the bridge story, two or three times a day, on 4th, 5th, 6th, 7th and 8th December and had covered it later in the report on the 9th.

It’s hard to see why it remains the number one story after this time,  and particularly when NHS Scotland has, in the past, completely dominated Reporting Scotland’s reports, for weeks on end.

This was particularly the case in the period before the General Election 2015. For examples, see my earlier study, ‘BROADCAST NEWS: BBC hit squad attacks NHS in ongoing crisis shocker!’ . Could their preference for the bridge story be because it was all they had at the time to undermine the SNP government – a bridging story? Sorry, couldn’t resist that. At least it wasn’t tunnel-vision. Either way it made me cross. (Sorry!)

So, to cheer us all up here’s the good news story from the BBC website and from BBC 1 News. Boy have they forgotten they’re supposed to be helping the poor wee Labour Party in Scotland. BBC Scotland will need to send someone down to Salford to break a few bones and introduce them to A&E England’s performance.

First, the table for A&E, with SCOTLAND at the top, up from second place last year! The only improving team in the UK – is SCOTLAND! 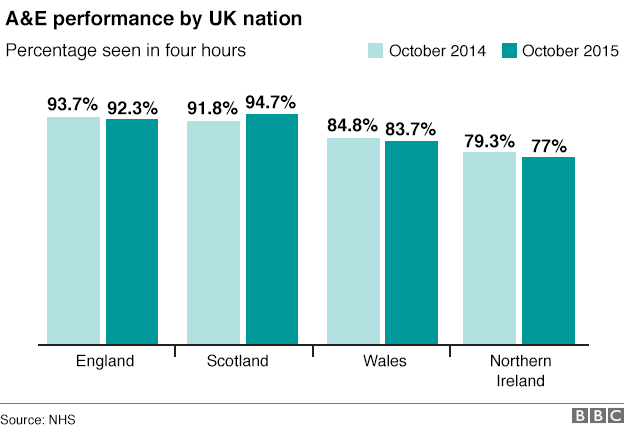 Come on Reporting Scotland, tell us all about it! You know how much we love hearing about the Scottish NHS, every night.

‘Out of all the four nations, Scotland enters winter in arguably the best position. It is the only health service that is actually doing better than last year.’

And here are some reasons for Scotland doing better, too, on the discharge of older patients to free up beds and thus to make it easier to treat A&E patients, courtesy of BBC England again:

‘Councils and the NHS [in Scotland] have been encouraged to pool budgets and a number of places have opened up intermediate care beds.

This appears to have led to a reduction in the delayed discharges that have proved so problematic in England.

And this position seems to be holding up. Scotland provides up-to-date information on the performance of the 30 busiest hospitals on a weekly basis. The latest data shows performance is currently just below the 95% mark.’

Now, before I finish, see these headlines to be reminded of the challenges NHS Scotland has had to overcome to top the UK league table:

Scotland is officially the sick man of Britain – Telegraph

So, NHS Scotland has even more to be proud of and, therefore, the SNP government has too, because they’d have gotten the blame if the figures had been worse .They topped the league against the odds. I’ve had recent experience myself of NHS Scotland, in Ayr – mini-stroke, big prostate, sleep apnoea and a sair knee, to name a few. Everyone I met was kindness itself, if a little intrusive with the prostate thingy. Intuitively, I knew they were good already. Now I know it’s a statistical fact. Well done all you doctors, nurses and all the other staff – champions! Well done Scottish Government for helping to make it possible.