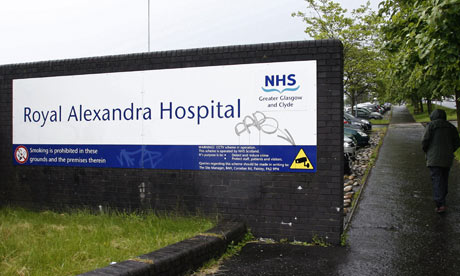 Did you know that Scotland has an Accident and Emergency crisis?  According to BBC Scotland it does.

On Wednesday morning’s Good Morning Scotland, BBC Scotland presenter Gary Robertson used the phrase “Scotland’s A&E Crisis” in a news bulletin trailer.  The claim was based on a story which had broken the day before.

On Tuesday the Scottish Government announced a special team would be deployed to a Scottish hospital that wasn’t performing as well as others.  The Royal Alexandra Hospital in Paisley had managed to treat only 84% of patients within four hours, well short of the national 90% average.

The story itself was genuine news.  The Scottish Government had clearly acknowledged there were issues around how individual hospitals were dealing with A&E.  Sending in a support team was a positive move aimed at improving the Royal Alexandra’s methods.

What it wasn’t was evidence of a nationwide crisis in Scotland’s Accident and Emergency Departments.  Yet that is precisely how it was presented by the top presenter on BBC Scotland’s flagship morning news programme.

I’ve no idea why Gary Robertson chose to say what he said.  Despite asking for an explanation on Twitter, none was forthcoming.  BBC Scotland has promoted similar claims of nationwide problems when the issues were in fact local.  The NHS Lothian waiting time manipulation scandal springs to mind.

The truth is that there is no crisis in Scotland’s Accident and Emergency Departments.  What there is are challenges and some A&E departments are addressing these challenges better than others.  At Ninewells Hospital for instance the number of patients treated within the four hour target was 98%.

Indeed, as you can see from the clip below which was broadcast on February 8th, Scotland has the best A&E waiting time figures for the whole of the UK.  If 90% is a crisis then what does it say about Labour’s handling of A&E in Wales where it is 79.6%.

Claims of an A&E crisis across Scotland have been made by the Scottish Labour party.  It is an election ploy, nothing more.  Indeed before Scottish Labour left office it boasted of a waiting time figure of 88%.  At the time, the new Royal Infirmary in Edinburgh only managed to treat 65% of patients within four hours.

That BBC Scotland presenters see no problem in parroting Labour party campaign slogans in news bulletins is deeply worrying, but it isn’t surprising.  BBC Scotland has form when it comes to the NHS at times of political importance.   Two days before the independence referendum, BBC Scotland’s Health Correspondent Eleanor Bradford reported that the SNP was now considering closing A&E departments.

Bradford made her claim on radio and in an online article.  The claim was completely false.  A complaint is currently being considered by the BBC Trust and a decision will be announced later this month, fully five months after the initial complaint was made – now there’s a waiting time.

Before the last UK General election the BBC reported that the NHS in Scotland was the least efficient across the whole of the UK.  The news was based on a report by the Nuffield Trust.  The Trust later admitted it had used flawed and out of date data for Scotland and its conclusions had been erroneous.

BBC Scotland seems intent on painting a picture of the NHS in Scotland as in crisis.  This of course helps Scottish Labour as it too seeks to convince voters that the SNP is not in control.  It’s why Labour politicians will utter the SNP have to ‘get a grip’ demand.

But it isn’t Scotland’s NHS that’s in crisis, it’s the BBC.  The Scottish NHS has the best patient satisfaction of all four NHS services across the UK.  Meanwhile trust in BBC Scotland is plummeting.  Listener figures for Radio Scotland went down in referendum year and are continuing to drop.

But how do you combat this chronic malaise at BBC Scotland which sees high profile presenters reduced to nothing more than political propagandists?

Some weeks ago I suggested Scotland’s new online media lacked cooperation.  My observation, not surprisingly, resulted in nothing of note.

But sooner or later those now in charge are going to have to admit that the new media is having little or no impact on the general public.  As single, small stand-alone entities they cannot apply pressure to the traditional media machine.

Why someone hasn’t set up an overarching umbrella organisation to facilitate discussion and cooperation is beyond me.  Think of the media attention such an organisation could command.

Think of the pressure that could be applied on the BBC [and newspapers] if an official group comprising the editors of Newsnet, Bella, Common Space, Independence Live TV and Wings over Scotland was to issue collective reports and statements questioning the traditional media narrative.

Such a group could force some high profile presenters and journalists to think twice before presenting pro-Union propaganda as news.

There are now two newspapers sympathetic to independence, The National and the Sunday Herald.  Let’s provide them with hard hitting material.  Let’s use them to put pressure on the BBC.

Late News: The “NHS crisis” campaign as Labour concoction remains clear to all except the BBC newsroom. Here’s an example from today’s Dundee Courier, where two Labour politicians held a photocall outside an empty health centre in Fife, without disclosing that in fact a brand new health centre had recently replaced it.