On the evening of January 12th SNP MPs swamped Twitter with angry messages after they were prevented from taking part in a House of Commons vote.  All Scottish constituency MPs had been barred from voting on legislation that the Speaker had ruled was relevant to England and Wales only.

This alleged ‘political apartheid’ was the manifestation of what David Cameron called ‘English votes for English laws’ (EVEL).

The barring of Scottish MPs was a constitutional first.  It was a historic moment in British politics and was a major political news story. Late that evening I tweeted a message to the effect that the issue deserved to be given high-profile coverage on BBC Scotland’s flagship radio news programme ‘Good Morning Scotland’ [GMS] the following day.

On waking the following morning I tuned in to hear how the issue was being covered. It was ignored.

The major news item was the loss of 600 BP jobs. One other story was a clear second in terms of priority. It centred on a Freedom of Information request by Motor Neurone Disease campaigner Gordon Aikman.

Mr Aikman, who is also a former Labour party advisor, was diagnosed with the condition in June 2014.  Since then he has shown remarkable courage and has thrown himself into campaigning in an attempt at securing more health care provision in order to help fellow sufferers.

His FoI requests revealed that hundreds of people across Scotland had died whilst waiting for social care provision. Radio Scotland deservedly gave the issue considerable coverage:

However the social care story also brought a response from Scottish Labour leader Kezia Dugdale, who issued the following statement.

“It is just not right that people who are dying can’t do so with dignity or proper support because the care packages aren’t available.

“Council resources are under pressure like never before, and things are only going to get worse after John Swinney’s budget cut funding even more.”

Scottish Labour was clearly looking to use the results of Mr Aikman’s FoI requests in order to attack the Government.  Central to the attack was what Labour claimed were cuts to council budgets. Indeed the ‘council cuts’ statement from Kezia Dugdale echoed a similar statement from Mr Aikman himself in which he had also blamed cuts to council funding for the failure to deliver social care.

Midway through the Good Morning Scotland programme another story arose.  Moray Council was apparently considering ending its council tax freeze.  Moray isn’t exactly the most high-profile council in Scotland and threats by councillors to increase the council tax have been made before. The story was quickly shoehorned into news bulletins on GMS:

Towards the end of the programme, Health Secretary Shona Robison was interviewed at length on the issue of social care.  The Moray story was brought up by presenter Gary Robertson.

The Robison interview was immediately followed by a short promo for the Kaye Adams’ phone-in, which follows Good Morning Scotland.  As you can hear below, one of the main topics on the phone-in was the social care issue raised by Gordon Aikman:

The Kaye Adams’ show included accusations that cuts to council funding was the cause of the social care issue raised by Mr Aikman.  Indeed the phone-in began with a recording of Shona Robison addressing the aspect of council funding posed earlier by Gary Robertson.

Gordon Aikman was a guest on the show and spoke frankly about his condition and the difficulties he faces. However the political nature of some of his comments compelled show host Kaye Adams rightly to inform listeners about his links to the Labour Party.

Periodic reminders of Shona Robison’s interview were juxtaposed with distressing and sometimes heart-rending stories from people who relied on social care.

By the end of the show it was clear that Gordon Aikman’s Freedom of Information request was morphing into a general issue with council funding.  The news story about Moray was helping to introduce the council tax freeze into the narrative. This was, in effect, a Scottish Labour news agenda.

That afternoon’s John Beattie show featured a discussion on the issue of the council tax freeze.  Joining the BBC Scotland presenter was two guests.  One was hard-line Unionist and former Labour councillor Michael Kelly (who last led Glasgow council more than 25 years ago. The other was the political editor of the pro-Union Times in Scotland newspaper, journalist Lindsay McIntosh:

The discussion panned out predictably. The only party criticised was the SNP.  So one-sided was the discussion that, as the clip above reveals, presenter John Beattie called out the imbalance.

Remember that the historic vote in the House of Commons that had barred Scottish MPs had been ignored by GMS. Yet here was a Tory / Independents-run council that administered services for 92,500 people issuing a threat heard countless times before and it was beginning to dominate the news.

Moray wasn’t even the first council to threaten to break the freeze. Last June Highland council issued a similar threat.

Councils have routinely rattled their sabres over the issue. In December the Scottish Daily Mail claimed a council tax revolt was imminent.  The accompanying article contained statements from several Labour-run councils. 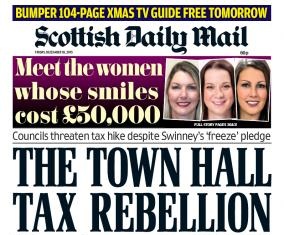 One local council threatening to end the tax freeze is not a national news story of any significance.  It is even less so when you consider that Moray council issued its ‘threat’ just nine days before Scotland’s local authorities were scheduled to confirm their acceptance of this year’s budget settlement from John Swinney.  The Moray statement was nothing more than an attempt at putting pressure on the Finance Secretary.  It was a two minute one-off news item at best.

There didn’t appear to be even a token attempt by BBC Scotland to ascertain whether the ‘threat’ was even credible.  The make-up of Moray council suggests any move to increase council tax would be outvoted, unless the Conservative councillors and their Labour counterparts joined up with the 10  independents to outvote the SNP [The nationalists are the largest group but don’t run the local authority].

Moreover, only last June Moray council boasted of a surplus of £5m due to its prudent management of finances. Commenting on the final budget results for 2014-15, council convener Allan Wright said:

“These are extremely encouraging figures. For some years now a culture of prudence has been growing throughout the council; taxpayers should be pleased to see how every manager and budget-holder is looking after the public purse.

“At the council budget setting of February 2014, we set aside £2.2m from reserves to balance the budget. That money was not needed at all and we were able to add a further £4m to reserves on top of that.”

Both Gordon Aikman’s Freedom of Information request and the Moray council tax threat made it onto the flagship TV news programme Reporting Scotland.  There were no surprises in the reports. The council tax freeze was described as the SNP’s ‘flagship policy’ –  despite all major parties having backed a freeze prior to the 2011 Holyrood election.

You’d normally think that would be that, but you’d be wrong. The Moray council story featured the very next day on Good Morning Scotland.  The story though was effectively shot down when a spokesman for the Scottish Conservatives confirmed that there was never enough support within the council to end the freeze in the first place.

The next day also saw the council tax freeze story get a run-out on the Kaye Adams show.  Listeners heard tales of cuts to services and job losses.  By the end of the near two-day stint social care and council cuts had been given considerable coverage by BBC Scotland.

The next day at First Ministers’ Questions, Scottish Labour leader Kezia Dugdale used both stories to attack the SNP.  You can view the full session here.

Dugdale’s accusatory questions allowed the BBC and other media to run the council funding issue for a third consecutive day and on into Friday.  BBC Scotland published an article which depicted Nicola Sturgeon as uncaring. 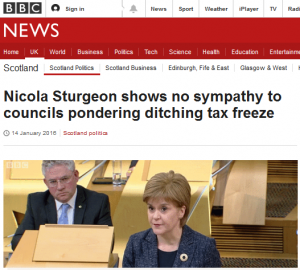 It didn’t finish there though as BBC Scotland covered Dugdale’s speech to the Unite union that Saturday.

At the Unite Scotland union’s conference in Clydebank, Ms Dugdale accused the Scottish government of making cuts to schools and social care.

BBC Scotland may not have deliberately aided Scottish Labour by running the party’s agenda over the four days, but it didn’t do Scottish Labour any harm.  The public were regaled with stories of cuts to social care and other services.  An obvious sabre-rattling statement from Moray council allowed the council tax freeze to be thrown into the mix.

Eight days after Moray council placed the council tax freeze on the news agenda the issue again featured on Reporting Scotland.  The item – on Wednesday January 20th – was based on a report from Naomi Eisenstadt, who was asked by Nicola Sturgeon to look into poverty and equality. The report suggested the Scottish Government should look at ending the council tax freeze in 2017/18.

The report featured on Reporting Scotland, as did the predictable response from Scottish Labour.

BBC Scotland has an obsession with the council tax freeze. The issue is regularly wheeled out on news programmes and always sees one party attacked. Despite Scotland’s largest local authority, Labour run Glasgow Council, having pledged a five year freeze at the last council elections and the party having pledged a freeze in 2011, Labour continues to find a vehicle  to attack the SNP.

It is rarely if ever pointed out that independent research by SPICe has shown that the SNP Government has given local authorities more funds through the period of the freeze than local authorities would have had had they relied on inflation-linked increases to council tax.

Estimates show that the money provided by the Government to freeze the council tax has resulted in local authorities receiving more income than they would have done by increasing rates by RPI.   In total, over the six years to 2013-14, this has resulted in an estimated £164.9m extra going to local government as a result of the freeze.

The Scottish public isn’t going to get anything like mature and informative debate on an issue like the council tax freeze.  The danger is that BBC Scotland covers the issue in the same manner as it did in 2012, just before the local authority elections.

Dugdale retains her sense of who she is, but does her...

How long must we wait before something is done about BBC...