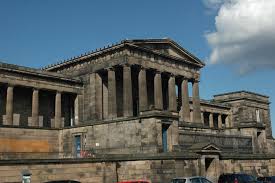 In the last few minutes, Ms Jemima Cymru, OBE (Other Briton’s Efforts) , Chair of University Court at  Caledonian University of New Technologies, announced that the University had withdrawn its controversial plan to close its outdated Larkhall buildings and to relocate in the more substantial Edinburgh Royal High School site.

The university had projected massive increases in fee-paying students from England and overseas to the prime site in Edinburgh. Protests from existing Edinburgh universities, threatened perhaps by CUoNT’s reputation, are thought to have swayed the Scottish Government and resulted in their rejection of the plan.

The University will now relocate to the Time Capsule in Coatbridge as part of its ‘Commonwealth, Legacy Whit Legacy, Sporting Centre of Excellence and Success if you Dream, Believe and Achieve’ initiative with South Lanarkshire Council. Professor Malfolio, currently Senior Executive Corporate Dean of the School of Tourism, Underwear, Recreation and Dance (TURD), will lead the project. Professor Malfolio quipped: ‘I expect things to go swimmingly.’

This latest development is thought to be the first step in the University’s change of thinking to adopt a more modest expansion strategy after a serious of well-publicised PR disasters since the arrival of new Principal, Professor Gillian Maciavellie, formerly professor of Childcare Studies at the University of Pitcairn Island.

Perhaps due to inadequate briefing by her department of External Affairs and a consequent lack of familiarity with the 16th Century but still influential, Dr John Knox edicts on universal free education, Prof Maciavellie launched a series of provocative but well-intentioned proposals designed to move Scottish Higher Education on from the days of Dr John Knox to at least the late 20th Century strategic thinking of Assistant Coach, Archie Knox in his Manchester United days.

Both Knoxes are still known fondly for their shared ‘get stuck intae thae basturds’ tactic. Prof Maciavellie, appearing on Have I Got News For You, suggested the reintroduction of fees for Scottish students including CUoNT’s 99% first-generation, low-income, part-time working students. Head of Finance Jim Scrooge insisted that many of the current students were earning up to £9 000 per annum in part-time jobs when, in the old days, they would have been in classes so you could argue that they had earned the money in University time and so, logically, it should be paid to the University as fees. Any subsequent hardship the students experienced would be minimised by the generous provision of food banks in the area.

To be fair the principals of St Andrew’s and Edinburgh universities did not join in the criticism and have already asked architects to draft ideas for extensions to their summer houses in Spain. Things were to get worse when the prof suggested that overseas fee-paying students who failed might get a refund. CUoNT lecturers were rumoured to be anxious that the latter initiative might put undue pressure on them to pass overseas students including those unable to get a bus or more importantly, those unable to swim through the entrance to the Coatbridge Campus.

The Principal did not have her troubles to seek as news emerged of the failure of the University’s New York Campus to graduate a single student after a £50 million investment. Depute Principal for Cost-cutting and Support Staff Impoverishment, Professor Pauline Swallow stated that the £50 million defanately (sic) had not been taken illegally from taxpayer funded fee income but came entirely from a sponsorship deal with Cumnock Caledonian Thistle football team’s owner and scrap magnate, Boabbie McFerrous.

With Professor Maciavellie in Archangel en route to El Paso, recruiting students, and Professor Malfolio and his partner Professor McFarenough in Bahrain sorting out student discipline problems, the University is currently being led confidently by Professor of Serbo-Croat Studies and Vice Principal for Reconciliation, Dr Darko Stankovic who brings his long experience of problem-solving in Bosnia to soothe the troubled waters of CUoNT. We wish him well.

His first task will be to deal with those unimaginative critics suggesting the University’s deal with private healthcare providers involving Syrian Nursing students working full-time, unpaid, in old folks’ homes is in any way exploitative. Professor Stankovic shouted at our reporter: ‘They get a BA Distance Nursing for only £9 000 per year and with no attendance required other than to resuscitate and carry the members of Court out to their cars after the Court Christmas Do and ‘Away Week’ in Gleneagles!

The Bahrain Campus is also suffering teething trouble, admits Professor McFarenough who is currently leading the Masters degree in Intercultural Education there. At the moment the Bahrain programme could be a bit more intercultural, agrees the Prof, as Sunni and Shia course members are not taught in the same rooms….or buildings……or towns for that matter. Professor McFarenough is working hard to get the two groups together but has so far been unable to persuade the Shia group (48 out of the total of 50 students) to be more reasonable and to agree to wear orange boiler-suits and be handcuffed and blindfolded during the classes.

The exasperated McFarenough told us that we all have to make sacrifices in the interests of progress and that she is disappointed for the Shia group who may now not be able to graduate…..or to go home to their families. Students have complained about the accommodation at another European centre where work-experience is limited to the Southern Baptist Church in Memphis or NATO and the teaching of Professor Schicklgruber.  Schicklgruber’s insistence on driving the students, as he lectures loudly, in his VW Camper Van, through the Czech Republic, Poland and Russia, has confused many of the students. University administrator, the Very Reverend Karl Testament, is also unhappy with Prof Schicklgruber’s repeated references to Mein Campus.

Finally, and more optimistically, the Luton Campus in Vanity Street, London SE1, has a good news story to tell after the near thing with a bonfire in the adjacent housing estate, according to Director of ‘Communication’, Marcus Headland OMG.

Critics had suggested that the failure of the University of South Wales to recruit a single student in 2014-2015 to its ‘There’s Lovely’ Campus in South London should have warned CUoNT to stay away.  Headland, however, was quick to point to the wrong-headed thinking of the critics. It’s simple he says, like buses and slot machines. If there hasn’t been a bus for some time, then you can be sure several will appear if you are patient.

Similarly with gambling machines, if the previous person has lost repeatedly, now is the time to gamble yourself. If no students applied to USW in 2014, then, logically,there must be hundreds who were just about to but missed the deadline for that year and will apply eagerly to CUoNT. As we interview Headland, his young assistant rushed in. She shrieked: ‘Director, I’m sorry but we’ve just found out there are several really good universities already in London!’ Headland calmly smiles and murmurs to himself: ‘Yes but are any of them CUoNT’s? I think not.’

Let’s finish on this happy note for Scottish Higher education in the 21st Century – ‘Onwards, Upwards and Anywhere – at Any Price!’