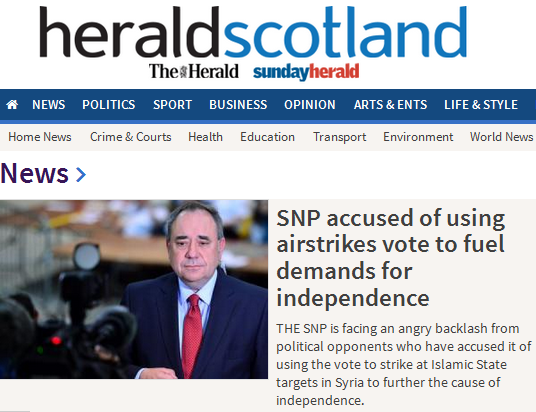 What a surreal week that was. It started last Monday with the debate in the House of Commons over whether to bomb Syria, and ended with Storm Desmond and the closure of the Forth Road Bridge.

Finishing the week with ‘Dessie Storm’ seemed apt given that the UK is once again joining the US in a middle-east conflict. All but two of Scotland’s MPs opposed the move in the House of Commons, but it didn’t matter. David Cameron’s Government was backed by 66 Labour MPs and a comfortable majority resulted. Jets were despatched to drop bombs on Syria within hours.

Scotland spoke through its democratically elected representatives – the only voice we had. But it counted for nothing.

Now, here’s my gripe with our media – the so-called Scottish media. Instead of presenting the vote result from the standpoint of our elected representatives, and highlighting Scotland’s opposition to joining the conflict, it turned on them. Or rather it turned on most of them.

Ever since the SNP voted en masse against bombing Syria, our newspapers and broadcasters have fallen over themselves in a bid at undermining the nationalists. Party unity has been questioned relentlessly with suggestions that some SNP MPs actually wanted to back a bombing campaign but were silenced. In a bizarre reversal from normal political thinking, the SNP’s unity has been presented as a problem for the nationalists.

The reason was obvious. South of the border Labour was in open civil war and Jeremy Corbyn’s leadership was being savaged by the media. The Scottish media couldn’t stand back and let the SNP reap the obvious political reward from Labour’s disarray, so it turned the story on its head. Unity became bad and a party split from top to bottom was presented as good.

Labour’s civil war was presented to the Scottish public as a party engaged in an open democratic debate.  The SNP, by contrast, was suppressing dissent.

There’s been precious little published (or broadcast) from the standpoint of our own MPs or the ordinary Scottish voters they represent. The Scottish public has been forced to consume news from a perspective other than its own. We are being force-fed someone else’s news.

It’s resulted in some quite bizarre headlines with military operations donning a Jimmy-Wig in a blatant bid at coercing Scots into psychologically joining the conflict. The message is that we’re part of this whether we like it or not.

The coverage of the aftermath of the House of Commons vote has been deliberately tailored not to echo our opposition to the conflict, but to try to turn that opposition into backing. The fighters aren’t UK fighters, they are Scottish fighters. The jets didn’t leave the UK, they left Scotland.

Not convinced? Then consider UK media reaction if, instead of Scottish MPs being ignored in London, it was UK MEPs being ignored in Brussels. Just imagine the media outcry if Germany and France outvoted the UK, and the Tory Government was forced to join a conflict it opposed.

Do you really think The BBC would attack the unity of the UK Government? Would newspapers like the Mail and the Telegraph lavish praise on Brussels whilst simultaneously seeking to undermine their own national government? Of course they wouldn’t.

Every news bulletin, interview and headline would be presented from the perspective of the UK. The vote would be honoured and support for troops would flow, but be in no doubt that the UK public would know deployment would be in sufferance.

Scotland doesn’t have its own media and thus our objection to the bombing of Syria isn’t echoed or reflected by the media we are compelled to consume. The attacks on Alex Salmond, who used a well-worn phrase [turn in his grave] in order to criticise Hilary Benn’s conversion to war-monger, was indicative of a media hell bent swimming against the tide of Scottish public opinion.

Benn voted in favour of bombing Syria just days after stating his opposition.

So wedded to an anti-SNP agenda are elements of the media that it can’t even acknowledge the glaringly obvious constitutional repercussions of the Syria vote. When the SNP suggested that dragging Scotland into a conflict against its wishes strengthened the case for independence, it was turned on its head as can be seen from the headline displayed at the top of this article.

Scotland’s political media has a colonial mindset. It can’t back our democratically elected representatives because they are SNP MPs. It is unable to reflect the views of the Scottish people back at us if these views undermine the Union.

Instead, the legitimacy of these MPs to speak on behalf of Scotland is questioned. Take a look at the clip below and marvel at the behaviour of BBC Scotland presenter Gordon Brewer.

Brewer’s performance is a hectoring and haranguing masterclass. SNP MP Stephen Gethins is barely allowed to talk at times as the BBC Scotland presenter pushes his twin agenda, which is that the SNP doesn’t speak for Scotland at Westminster [who does then?] and its opposition to bombing in Syria is hypocritical.

Against the backdrop of media attacks and innuendo about the SNP, there’s been nary a question asked of our Secretary of State, David Mundell. I for one would have liked to hear his explanation for David Cameron’s claim of 70,000 soldiers ready to take on Daesh. But a colonial media isn’t going to put the Viceroy in the dock.

There are decent journalists in Scotland, of course there are. But they don’t write the headlines and they don’t set the agenda. They work for a media machine that is steered from outwith Scotland. They are tolerated just as long as they don’t bite the hand that feeds them.

A recent appeal which aims to produce a documentary based on my book ‘London Calling: How the BBC stole the Referendum’ reached almost three quarters of its £20,000 total.  Filming is currently underway, but funding is tight.  Anyone wishing to donate can still do so by clicking here. G.A. Ponsonby.