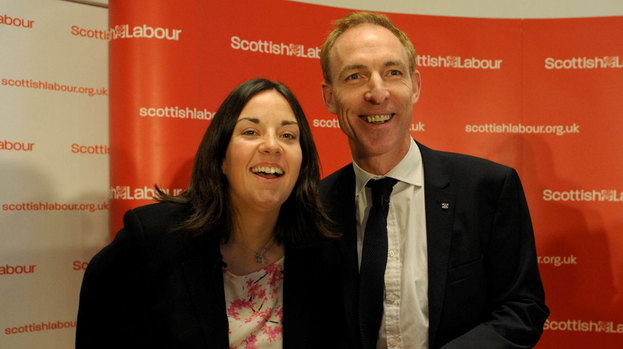 What is Scottish Labour policy on the council tax freeze?  I have to admit that I don’t know. I don’t think anyone does. The policy changes depending on the wind.

Prior to the 2011 Holyrood elections, Scottish Labour backed a freeze. After those same elections – having lost – the party opposed the freeze. Support for a freeze materialised again when a by-election was underway, but disappeared afterwards.

The council elections in 2012 saw former Scottish Labour leader Johann Lamont endorse Glasgow Labour councillors who pledged a five year freeze.   This was the same Labour group that had previously attacked the SNP over the freeze only 18 months earlier.

Until January this year, when John Swinney confirmed the SNP planned to extend the freeze across Scotland for an additional year, the Labour party, courtesy of its Glasgow contingent, was the only party committed to any kind of freeze on council tax beyond the lifetime of this parliament.

But you wouldn’t know that from the media coverage would you?  The loudest voices attacking the council tax freeze are usually Scottish Labour voices.

I don’t think I’ve ever seen a political party adopt so many different positions on one issue. Indeed, as witnessed by the clip below, senior Scottish Labour MSPs can both claim to have always opposed the freeze and never to have opposed the freeze.

How is this possible?  How is it that a party can alter its stance so easily on such a key issue and get away with it?  The answer of course is because it is allowed to.

Scottish Labour has been indulged by the main stream media in Scotland since it lost power back in 2007.  The party can U-turn or pledge anything it wants in the knowledge that it won’t face any repercussions.  Well, none from the media anyway.

Don’t believe me?  Then ask yourself how many times you have seen Kezia Dugdale taken to task over her fantasy APD money?  Never is the answer.  Scottish Labour has thus far managed to allocate this fantasy cash to three different areas – education, tax credits and a bung for house-buyers.  There’s been nary a peep from the media.

Kezia Dugdale is continuing a tradition introduced by Iain Gray who was the first to perform policy summersaults when he looped-the-loop over the council tax freeze in the run-up to the 2011 Scottish elections.

His successor’s speciality was university tuition fees.  Johann Lamont added it to the Scottish Labour gymnastic portfolio when she publicly backed free tuition before the 2011 Scottish elections…

… only to attack free university tuition as unaffordable less than a year later.

Scottish Labour’s new leader was previously Jim Murphy’s deputy.  Kezia  Dugdale was his voice in the Scottish parliament at the time of the 2015 manifesto.  One has to assume that Ms Dugdale endorsed her party’s manifesto nine months ago.

Kezia Dugdale has just pledged to build 60,000 new homes should her party defeat the SNP this May. That received widespread coverage last weekend across the entire Scottish media – print and broadcast.

But Scottish Labour was already committed to building new affordable homes. Back in April 2015 Kezia Dugdale and Jim Murphy pledged not 60,000 new homes, but 100,000. The pledge received similar coverage from the outlets that are now reporting the revised number.

Last April Scottish Labour issued press statements and launched a social media campaign boasting of their plan. Below is a promotional video featuring the then Scottish Labour leader:

The new pledge to build 60,000 new homes is a clear drop of 40,000 in the space of nine months. But the Scottish media aren’t interested. 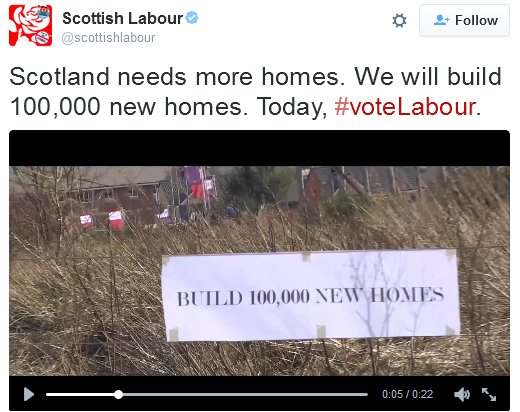 Murphy’s manifesto has been quietly binned along with some of its more bizarre policies such as the pledge to re-introduce alcohol at football grounds. The party prefers to pretend it never happened.

Scottish Labour is in such an electorally fragile state that any serious scrutiny of Kezia Dugdale and her policies in the run-up to May could prove catastrophic. The fragile thin red line which holds the Union together could snap if pressed too hard.

Promoting Labour policies will of course have little impact in the Scottish election campaign. The party is in such a parlous state that it can only hope to affect the margins. But such a marginal impact may just be enough to deny Nicola Sturgeon’s party a clear majority.

Alongside the media protection of Labour will run a full scale assault on the SNP. The media has evolved into a Unionist machine. Take a look at the way an innocuous decision to drop a debate on fracking has been headlined by some newspapers as near civil-war.

Despite this, the independence supporting Sunday Herald has rather bizarrely reported there will be no manifesto commitment. The story made it onto BBC Scotland as you can see from the clip below.

The SNP will be pursued relentlessly over the next three months. Scottish Labour on the other hand will be lucky to receive glancing blows from a media intent on protecting it in the run-up to May.

This is why we need an alternative media. After all, if we don’t expose the one-sided charade then who else will?