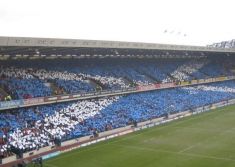 I watched a rugby match on television last weekend.

This was a strange affair. It was described as an international match and yet neither of the competing teams were countries, just regions of another country. The tournament they were playing in was even called the Six Nations Championship yet both of the teams represented regions which are governed by one of the other countries playing in the very same tournament.

The team wearing a blue strip was called Scotland (the sort of name you would associate with a real country) but the other team, which was wearing a red strip, was just called Wales. It was funny at the start because both the teams lined up just before the game kicked off and sang what they called “national anthems” although, as I said, neither of them justify “a solemn patriotic song officially adopted by a country as an expression of national identity” (Oxford English Dictionary definition of “national anthem”) because neither of the teams represent “a nation with its own government” (Oxford English Dictionary definition of a “country”).

While we’re talking about “English” here I should mention that the other country in this equation is England, the one with its own government, the real country.

I just couldn’t understand all the pageantry and fake patriotism on show. I mean, how can you show “vigorous support for one’s country” (Oxford English Dictionary definition of “patriotism”) when you don’t have a country. All of these people, and there must have been about 60,000 of them, were getting excited and waving flags in the air about nothing more significant than their regional status. Claiming to be patriotic about Scotland or Wales is like claiming strong patriotic feelings for West Lothian or Abergavenny, a contradiction in terms, a non-sequitur.

The thing that really got me though, was that the people who live in the place called Scotland had the chance to become a real country five months ago. They were asked if they wanted to take control of their own destiny and make Scotland the best it could possibly be by their own efforts, to shape their own society and take pride in their achievements. But they decided that they didn’t want the responsibility.

Yet there they were in Edinburgh, proud of themselves, some of the very people who’d turned out in unprecedented numbers to answer the question “should Scotland be an independent country?” with the one-word answer “no”. They wanted to revel in the pride, shared passions and sense of identity that comes with nationhood without having to take on board any of the challenges and responsibilities that every real country accepts as an integral part of the deal.

Thinking about rugby, it made me remember the unedifying spectacle we endured a few short weeks before the referendum when several high-profile players from Scotland’s past got together to stage an anti-independence stunt at Murrayfield, our so-called “national” stadium, all of them boasting about their super-patriotism while denigrating the idea that Scotland should be an independent country. All the while declaring themselves proud Scots, of course, every one.

But back to the game. The team called Scotland lost by 23 points to 26. Do you care?