It should come as no surprise that the story of the Easter weekend, now christened ‘Project Smear’, arose in the immediate aftermath of the novel seven-way TV leaders’ debate, when Nicola Sturgeon got the reception the likes of the Telegraph have long feared.

That early YouGov poll indicating that the First Minister ‘won’ last Thursday’s debate raised questions about perceptions of the SNP south of the border.  Certainly this is inconsistent with the media hysteria that has surrounded the SNP’s potential influence in the likely event of a hung parliament – a prospect that has repeatedly been described as “terrifying” and “disastrous” by Tories, tabloids and unelected peers alike.

Although Project Smear/’Frenchgate’ was beefed up faster than Labour MPs could delete their  tweets, the real story here is this: why has it taken so long as five months in the top job for Sturgeon to receive the kind of front page attention generated during the past week?

While she has led her party through a period of unprecedented growth since last November, the  TV debate was probably the first time that many people outside Scotland have been allowed to see her as the new face of the SNP, and the first time that they have really considered what a resurgent SNP might have to offer them.

Sturgeon was effectively unveiled last week to the voting public down south, where establishment figures and the mainstream media have so far attempted to keep her agreeable voice of reason out of the limelight, desperately clinging to their exhausted Big Bad Salmond rhetoric. 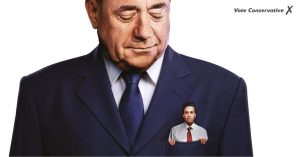 In the language of Tory spin with regards to the SNP ‘threat’, she barely had a look in.  An Ed Miliband reliant on SNP support would be “in Alex Salmond’s pocket”, so the line went, and for those who didn’t get the picture, they kindly made one (right).

Of course Alex Salmond is not the leader of the SNP.  He is not even deputy leader.  Apparently he won’t be SNP leader in the House of Commons, if elected in Gordon.  In their belittling of Ms Sturgeon’s leadership position, the underlying condescension and good old-fashioned sexism of the Tory Party has been no surprise. Their use of Salmond as a weapon against Miliband is in some ways logical.

Nicola Sturgeon is an incredibly popular politician in Scotland and, given half the chance, it seems she will easily outshine the meagre offering on display in England too.  Westminster’s approach thus far has been the same approach that plagued otherwise intelligent debate throughout the referendum campaign:  Less talking policies, more painting villains.

The demonisation of Alex Salmond as a sort of fantasy fascistic anti-English despot was an unnecessary but incredibly pervasive aspect of the pro-union print media’s coverage of the referendum.  It was seemingly also one of the few aspects of the debate that the English general public picked up on.  But, again, this should come as no surprise.  It was only towards the very end of the campaign that the “UK” media talked about the Yes movement and the civic nationalism that had characterised the pro-independence side from the outset.

Collectively, Scotland was well past any sense of independence being an “anti English” issue. But this fact never quite made it across the border.  The popular image of the SNP remained tied to this caricature of Alex Salmond and some sense of unhelpful, antagonistic unpleasantness.

It is a lot more difficult to paint Nicola Sturgeon as a villain. People might be starting to see the full picture – and it’s a rather different picture to the Tory caricature of wee Ed in not-so-wee Eck’s pocket, however well that might still play with their core support.  With Sturgeon, the picture of Scotland as a progressive beacon is much more tenable.

Whereas Salmond may always be associated with division for many, the SNP under Sturgeon – along with Plaid Cymru in Wales – presents a clear and reasoned alternative in this General Election to the Westminster consensus; people across England are realising that they want one too.  Or rather they are realising slowly but surely, as Scotland appears to have realised, that this position is simply not represented by the self-serving, vapid organisation that the Labour Party has become.

Sturgeon emerged from last Thursday’s debate on top – a debate in which the myth that Scotland doesn’t pay its way was yet again churned out by Mr Farage. The fact that the three female party leaders with their anti-austerity message were deemed to have done so well reflects a long-overdue move away from tired two-party politics in Britain.

Whether or not traditional Labour voters in England will turn to the Greens in any significant numbers remains to be seen. But as support for the SNP surges in Scotland following the political re-awakening experienced here, people the length of the UK may at least starting to think twice about the merits of simply voting for the lesser of two evils every five years.

Perhaps the prospect of a Labour minority government steered somewhat leftwards by the SNP is not as terrifying to everyone as it might be to the Telegraph, the Mail and their readerships in Middle England, whose knickers appear to be forever in a twist.

Perhaps there is a substantial percentage of the population in England that, in fact, might be warming to the idea that maybe – just maybe – we have finally reached at a point at which the Labour Party, in order to govern, will have to change its ways, or have its ways changed for it.

The attempts to ‘Salmondise’ Nicola Sturgeon have now begun in earnest.  When given a  UK-wide platform, she was able to break through the spin like never before, but now we can expect the personal attacks to come in thick and fast in the weeks ahead.

It will be interesting to see, however, whether they come up with anything more substantial than a phantom memo that was invalidated within minutes.

Has Scotland witnessed a spike in post-Brexit hate crime – or...