The debate over the BBC’s supposedly planned “Scottish Six” may be obscuring the real agenda in broadcasting north of the border. Our intrepid scoop-hunter Citizen Cuddis* reveals that the BBC and ITV are considering joining forces to commission proposals for new programme formats with the so-called ‘shortbread’ factor.

The report’s author, Sir Anthony Cowcaddens, the 32nd Earl of Broughty-Ferry, is due to publish his recommendations next week.

Both media giants insist that Sir Tony is eminently qualified for the task. His grandmother once ate a scone at a bed-and-breakfast in Fort William during a coach trip to the Highlands from Chipping Sodbury in 1968 while her husband scoofed liver-crippling drafts of 30-year old Lagavulin watching an episode of The White Heather Club in the B&B lounge.

A photocopy of Sir Tony’s proposals was slipped under NewsNet.Scot’s front door this morning. We reveal its unedited contents…

The following programme outlines offer the peoples of Scottish-land the powerhousiest of programme schedules, the local content of which far exceeds the quality of similarly funded broadcasting behemoths such as the Somalian Broadcasting Corporation, Easter Island TV and Radio Greenland. Coupled with the awesome-ist powers since Moses parted the Red Sea, soon to be delivered to the teuchters via the Scotland Act, there will be little for the broadsword-twirlers to complain about—apart from the £7 billion shortfall in national funding over the next decade that is.

A Scottish version of the popular quiz show, Egg Heads, in which teams with the intellectual capacity of a seventh–placed Labour list candidate and names likeThe Westminster Willie Warmers crash and burn against an in-house team of tournament-hardened general-knowledge specialists who have memorised—amongst several thousand other things—the names, addresses and inside leg pantaloon measurements of every monarch, royal sibling and second cousin twice-removed since the fourth century.

In this north-of-the-border version, four lightweight SLAB politicians (is there any other kind? Ed.) attempt to con a panel of Scottish punters into voting for a range of half-baked, Ill-considered, howlingly Yoonish manifesto pledges, which they must pitch through the medium of highland dancing. The opening program is to feature The Ginger Ninjas against The SLAB–a–dabba–doos and the pledge is to repeatedly spend non-existent Air Passenger Tax revenues to power the entire Scottish economy.

Contestants offered the names of Scottish citizens past and present must decide which category they fall into: Bampot, Neep-Heid or Uppity Jock? Suggestions for subjects include John Logie Baird and Alastair Carmichael.

Elected SNP figures put forward amendments to the Scotland Act. A panel of Hoorah Henry’s and Henrietta’s vie to provide the fruit-loopiest excuse for turning them down.

Celtic version of the supernatural series in which Mouldy and Scullery discover an almost extinct species (politico neanderthalensis) wandering aimlessly about the political landscape near Carnoustie. These primitives have lost all vision and the ability to do even basic sums. They are also about to lose all of their constituency seats. The tribe’s persistent belief that they will once again dominate Scotland once the electorate wise up, provides the sort of enigma inside a puzzle, wrapped up in a conundrum on which Mouldy and Scullery cut their teeth.

A selection of your favourite madcap cartoon characters including Fluffy and Carmichael.

Specialists try to breath life back into the Labour Party. Can they stop the organisation flatlining before anyone who still gives a hoot switches their vote elsewhere?

IDS as Periwinkle Twatt, thrashing his way through what’s left of the welfare state with a riding crop, helping people back into work by driving them into the workhouse.

Not your money of course, rather Amazon’s and Google’s money. Studio discussion on IDS’ plans to make it easier for the poor to sell their offspring to ne’er do wells, mountain bandits, opium fiends and other sitting members of the House of Lords, by regulating the trade (a flat rate of two pounds per child (three for a fiver) with income subject to tax at 50p in the pound) — money that will be ring-fenced for subsidising metropolitan infrastructure projects.

The SS Politician runs aground off the Utter Hebrides with a SLAB policy aboard. Wily islanders play catch–me–if–you–can with the UKOK Yoon-Squad, who attempt to get the policy back to Head Office before any of the islanders get time to read it and die laughing.

The B Feature: The (British) Empire Strikes Back

Not really a film at all. Rather a talking heads program in which neo-liberals discuss how modern policy making can be adapted to restore Victorian values. Opening subject: Was rickets character forming?

Seal twenty random Jocks in a house for a month. Take away their booze, fags and right to self-determination and watch as the claymores skirl.

*It is possible that Cuddis made this whole thing up. We only receive his bulletins wrapped in an envelope postmarked Peterhead that smells very strongly of prime North Sea cod. Ed 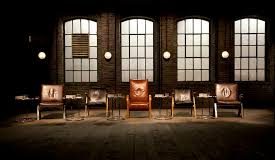