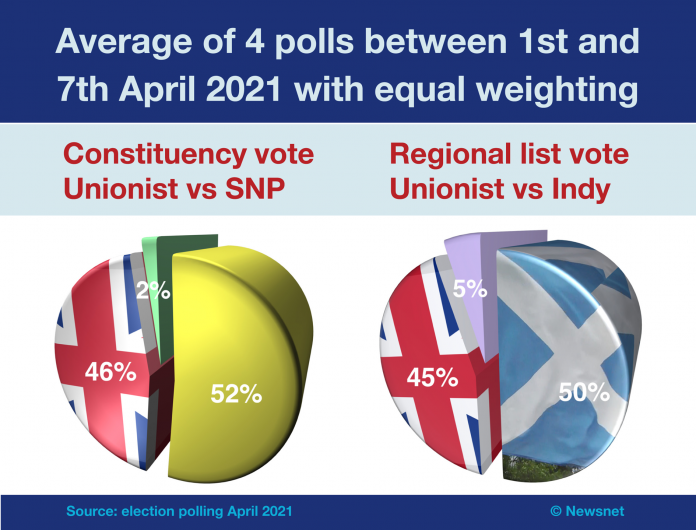 Whilst we wait for the next clutch of polls a quick look at what the first part of April indicated compared to the latter part of March. Again we have given four polls from 4 different polling companies equal weight as they were conducted and published over a relatively short period.

Short-run poll of polls only tell us so much and different results for individual parties tend to be within a fairly narrow range. Constituency polling by all 4 puts the LibDems on 6%. The Conservatives vote ranges from 20 to 23% and the Labour party seems to be settling around 18% suggesting a bit of a drop back. The Labour party will be hoping that Anas Sarwar can close in on the Tories in the final stages. The 4 polls show a 4 point difference in constituency support for the SNP with 2 finding them at 49% and 2 at 53%.

On the regional list there is more variation and, as in previous elections, the SNP vote share drops with Green support varying between 7 and 12%. Labour and the Conservatives regional list share broadly mirrors their constituency vote percentages. Alba puts in a minor appearance with an average of 3%.

As we did for the last graphic diagram the three unionist parties are represented by the ‘Jack’ and electable pro-independence parties by the Saltire. The Alba party are included in others and the reason is their support level is below the 5% barrier at which point they would be eligible for inclusion in the D’Hondt round of calculations. This is entirely on a statistical basis. If we see clear evidence that Alba are clearing the 5% hurdle their vote share WILL be moved from ‘Others’ to ‘Independence Parties’.

With the second debate now past, campaigning picking up and manifestos swirling will there be some straws in the wind to indicate a real change in the next clutch of polls, no doubt like manifestos, timed for the arrival of postal votes? The SNP are clear leaders, but whether they can accomplish the unimaginable and gain an overall majority just on constituency seats would be extraordinary with a voting system designed with the intention to make that impossible. Labour couldn’t do it in their heyday and Anas is concentrating on closing that gap with the Tories as he seeks to regain for Labour the position of official opposition.

A former head of the UK’s Cyber Security has warned that a union must be based on consent and not the force of law The Financial Times reports. Ciaran Martin now of Practice in the Management of Public Organisations at the Blavatnik School of Government, Oxford, delves into the constitutional issues related to a Scottish independence referendum, drawing on his direct personal experience from the 2014 referendum and the negotiations preceding it. Johnson’s resistance is set to crumble and Newsnet will bring you more on this shortly.

Calls for oil fund increase after yet another major discovery 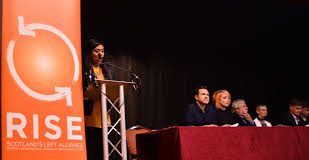