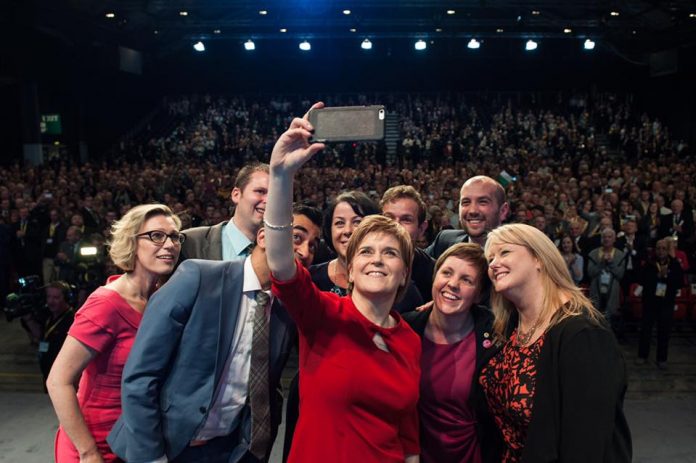 Just back from France…did I miss anything? And please don’t say the SNP conference. These events are the dullest, most choreographed bit of media tap-dancing you’ll ever come across, no matter how many cheering delegates and how many tambourines. Something must have happened.

Meanwhile I was literally in the geographic centre of the country in a non-tourist, farming area where there are endless hedge-lined fields, broadleaf woods, Limousin cattle and rustic hamlets with half-beamed houses and a million crumbling wooden barn doors. How many barns are there in France and what’s inside them?

You could drive all day and not see a soul – quite eerie. Everything looked shut even when it wasn’t. The pace of life isn’t so much slow as hibernatory. At this time of year Limousin is one long yawn as if saying summer is over, get ready for the winter sleep. Ah, the longueur.

It was a visit to Oradour-sur-Glane that brought me round. It’s the village targeted by the Nazis for eradication in June 1944 days after the Normandy landings. Over 600 were rounded up, moved in sections to different sites and machine-gunned before being burned. The women and children were crushed into the church and suffocated with smoke before the doors were held open to allow the SS to fire into them. There were six survivors. They laid waste to the village which was on a tram line from Limoges and was a popular spot for fishing with cafes, restaurants, fabric makers and hair dressers.

And it’s all still there. De Gaulle asked for it to be preserved as a reminder and a new village was built nearby. You walk through the streets past the garage where one group of men were sprayed with bullets. 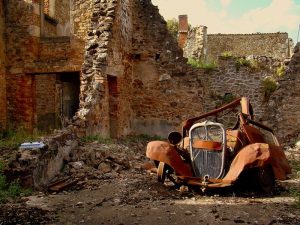 The rusting hulks of 1940s Citroens still sit inside. In the blasted front room of a house where calcified remains were discovered, there is a sewing machine. In the market square where the SS held them before execution, the mayor’s car sits where he left it. There is the church window through which the sole woman survivor escaped and the impossibly well- preserved confessional box in which the bodies of two little boys were wedged, both shot in the neck.

It is a visit to recalibrate your compass. What does real terror feel like? When your eyes meet your mother’s as you are led away, do you reconcile yourself? When the black smoke fills the building do you lift the baby out of the pram to hold it or drape yourself over to protect it? (The pram is there in the sacristy). What happens to humans when all normal protections of law, security and understanding have gone? 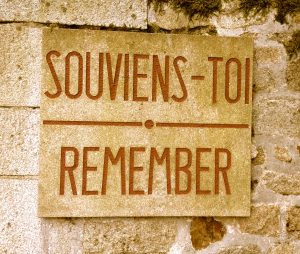 It was from the ashes of Oradour and other sites like it that an idea was born. Amid the fury and recrimination came the realisation that this was avoidable – that war itself could be pre-empted through treaty which is the formalisation of friendship.

The early Franco-German alliance and the European Coal and Steel Community led to today’s EU. It was what we usually call a dream, an aspiration or, in modern political parlance, hope.

All this is a long way from our debate and you can’t walk through Oradour and think of politics as local government reform and tax policy, of personalities and polls. Much as we sometimes deny it because it’s good sport, politics is directly tied to people’s aspirations. It’s what they want for themselves and, as we asked in the indyref, what kind of country do you want to live in? I doubt if anybody of any party would fail to list safety and the pursuit of happiness and, if it were possible to ask villagers of Oradour, they would agree – to be safe and to be happy. Define, according to taste.

What war teaches us is that we all have the capacity for cruelty and the infliction of death but the construction of alliances and laws improves human relations and reduces the risks. France knew the route it must take after 1945 and in seeking those new friendships and pacts, it created a new age of optimism – and prosperity – across Europe. In short, it deployed hope not vengeance.

Sometimes the actions of men are inexplicable, occasionally so grave as to overwhelm our rational responses. That’s when we look beyond the conventional to the ethereal. We search for a reaction that is greater in force than the events that triggered it and there we find it in hope – a desire for, and belief in, better.

Beyond all the politicking of the economy, the health service or land reform, striving humans need a sense of hope. Not because Scotland faces imminent 1945-style attack but because it is a fundamental of the human condition that drives us forward and gives us a reason to continue. Your hope may be different from mine but it will have the same effect.

In catching up since my return, I see pieces by writers puzzled by on-going SNP success when (apparently) they are mired in sleaze. They are impervious to our smears and slights, might be another way of putting it. But I don’t find it surprising at all. They have a simple idea summed up in one word – Scotland – that anyone can make their own and they have a message based on debunking the old ways to create a better country – in other words, hope.

It is an idea that lies at the heart of all marketing and, indeed, is at the root of religion. No other party in Britain has fashioned a way of linking itself so successfully to the idea of hope. In Labour’s case, it has fallen into the trap of ridiculing it in the belief that an attack on high-flown aspirational rhetoric amounts to an attack on the SNP. This is just wrong.

Listen to the voices on Billy Kay’s series The Cause on Radio Scotland on how they feel about their country and the future. From my own disbelief at how one group of Scots disparaged their own country in order to win, to others who’d do it all again tomorrow so hopeful, excited and inspired did it make them. People are sick of cynical, tired of the manipulative, hungry for positive. It doesn’t matter how much it’s just politicians’ talk, it’s important that it creates the mood music against which people make their judgments. It means that every time the SNP mess up, they are more likely to be forgiven.

Voters aren’t daft. They know what politicians are, and don’t expect the SNP to be any different. But they believe they are trying to do right, are convinced they want better. You don’t have to like all the policies – who does? But since your government is tied directly to your happiness, don’t you want one that has a convincing line in hopeful language, one that shares your belief that there is a way to make things better?

The opinion polls tell us a story the journalists cannot. The SNP have cornered the market in all-Scotland voting intentions and now they have taken out the copyright on Hope. They will own it for a long time to come. 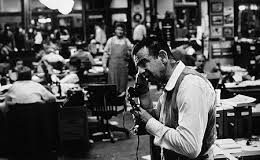 Corbyn does not need to change, but the system does