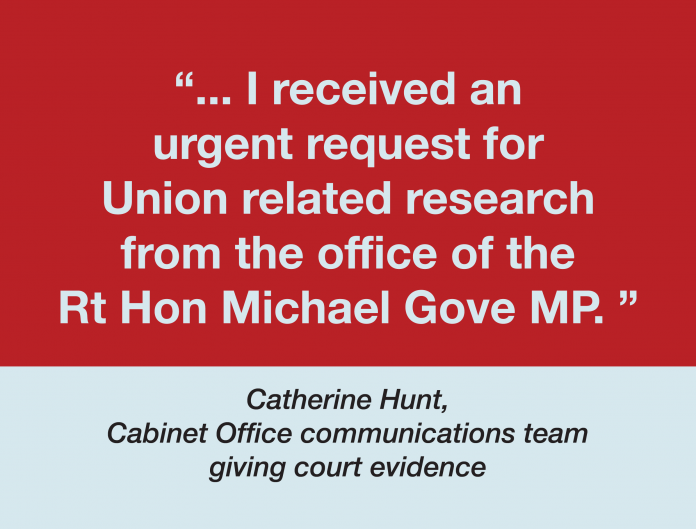 Why did BBC Scotland try to conceal the fact that UK Government pro-Union research was funded by Covid cash?

We tuned into BBC Radio Scotland on Tuesday to listen to an interview with SNP MP Ian Blackford. The subject of the interview was the revelation that the UK Govt had used cash intended for Covid purposes in order to fund anti-independence polling.

Introducing the interview, presenter Laura Maxwell stated the following: “For months now the SNP and the Conservatives at Westminster have been locked in a dispute over polling around attitudes to Scottish independence which the SNP says the UK government commissioned.”

Straight away our ears pricked up. Nobody disputed that the UK government had commissioned such polling, so why was Maxwell telling listeners this was an SNP accusation as opposed to an outright fact?

Maxwell continued, “The party’s leader at Westminster Ian Blackford has accused the UK government of using money meant to be earmarked for the response to the Covid pandemic to carry out the polling.”

There it was again. An indisputable fact was being presented as an SNP accusation. What was going on? Maxwell was immediately corrected by Blackford.

On July 8th 2020, giving evidence in the case, Catherine Hunt – who is “head of insight and evaluation” for the prime minister’s office and Cabinet Office communications team, told the court that focus groups were being set up to look at the UK government’s Covid Renewal programme.

She added “Independently at around this time I received an urgent request for Union related research from the office of the Rt Hon Michael Gove MP. In response, I asked Public First to conduct some testing of people’s attitudes on this issue.”

The image below is from an official transcript of the court case.

So why did a BBC Scotland presenter imply this quite remarkable court-established fact was merely an SNP accusation? The answer is we can’t know for sure. What we do know though is that BBC Scotland had already decided to conceal the fact that it was an established fact.

The clip below is from six days earlier when the story first broke. Note how each BBC Scotland news reader uses exactly the same ‘SNP accused’ term. The language is identical. The fact concealed.

Even newspapers are said only to have claimed Covid funds were used for pro-Union research. What they had of course done was exposed the fact after it was revealed in a court case.

There is clearly manipulation at play here. By presenting a fact as merely an accusation BBC Scotland minimises the political impact of the story. It is inviting the public to believe that there may be dubiety in what the SNP is saying.

That several newsreaders and presenters adopted identical or similar language when reporting the story it is safe to assume this attempt to conceal the veracity of the story was deliberate. That is to say that BBC Scotland set out to minimise the political damage to the UK government.

The Dark Side of Unionism

The Wicked Witch of Westminster says the independence referendum is not...