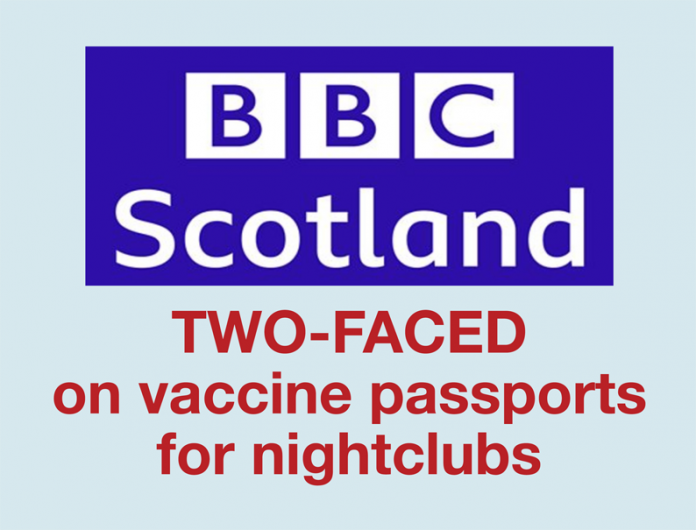 On Wednesday September 1st the First Minister told the Scottish parliament that digital vaccination certificates would be introduced in Scotland and that they would be mandatory for anyone wishing to access a nightclub or large scale events. The announcement followed a worrying rise in Covid cases in Scotland and an equally concerning low vaccine uptake amongst young people.

Within hours of the announcement the BBC was platforming voices opposed to the idea. Scottish Tory leader Douglas Ross featured prominently. Ross accused the First Minister of creating confusion by not defining what a nightclub was.

Ross’s bizarre attack line was repeated by a string of BBC Scotland presenters and reporters who lent credibility to the notion that folk wouldn’t be able to tell the difference between a pub and a nightclub.

The attacks and the rhetoric were ramped up. The Kaye Adams’ phone-in programme heard Dr Chris Smith, who presents the BBC’s ‘Naked Scientist’ podcast, described the policy as “a leap into North Korea territory in some respects.”

BBC Scotland also platformed an academic from London, Dr Alex de Figueiredo, who claimed the policy was “divisive and polarising” and could lead to widespread protests. The academic featured in Radio Scotland news bulletins on Thursday Sept 2nd.

It became all too clear that BBC Scotland was attempting to undermine the policy announcement and sabotage its success.

But what of its claim that there was confusion as to what constituted a nightclub? This was probably the most risible of all of the attack lines.

There was similarly no confusion when they reopened in Scotland. BBC Scotland sent camera crews to interview young folk eager to resume clubbing.

But that wasn’t the worst aspect of BBC Scotland’s coverage of the issue. The corporation was concealing a rather significant fact. Twenty four hours before the Scottish Govt announced plans for vaccine passports, the UK Govt had confirmed its intention to go ahead with exactly the same system in England.

On August 31st the Guardian newspaper reported vaccine passports would be required for access to nightclubs and large gatherings in England.

When asked about vaccine passports, Boris Johnson’s official spokesperson said: “We set out broadly our intention to require vaccination for nightclubs and some other settings. We will be coming forward in the coming weeks with detail for that,”

Indeed Boris Johnson had announced the plan on July 19th in a live televised address broadcast by the BBC.

Where were the attacks on Johnson’s plan? Where were the criticisms of a lack of detail? Why was the BBC relaxed about defining a nightclub in England?

BBC Scotland had made no mention of either the initial announcement by Boris Johnson or or the subsequent confirmation from his spokesperson. Why not? To have done so would have undermined attacks on the Scottish Govt by Scottish Tory leader Douglas Ross.

By concealing Johnson’s announcement and the confirmation BBC Scotland ensured the public was not aware that the Scottish Tory leader was levelling accusations against the Scottish Govt that his own party was guilty of. Indeed plans that Ross, as a Tory MP, supported. Ross was attacking and supporting exactly the same plan simultaneously.

BBC Scotland’s coverage of the vaccine passport policy announcement by the First Minister appears to have been designed to undermine it. To sabotage it. That lives may have been put at risk seems not to have concerned its reporters.

It has amplified attacks by those with an agenda against the SNP whilst concealing facts that weaken those attacks. It has allowed spurious claims to be made. It has promoted ridiculous arguments.

BBC Scotland’s behaviour has been unethical.

BBC Scotland shares a lesson in double standards and no standards

Migrants, ‘jokes’ and tweets – the language distortions of broadcast news