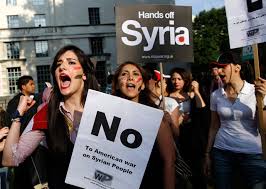 Funny how the Syria bombing saga mirrors events pre-Iraq. Cameron’s off-guard ‘terrorist sympathisers’ remark reminded me of John Reid, as Tony Blair’s studio attack dog, saying that opposition to invading Iraq meant supporting Saddam. It’s the You’re Either With Us Or You’re Against Us routine that forces you into an entrenched position and does so from a false prospectus.

This question is a kind of moral maze because as soon as you see one route through, you’re ambushed by the unforeseen. Thus, ‘I don’t agree with military action in Syria’ is immediately compromised by the fact we already have troops on the ground doing reconnaissance, intelligence and training – just not fighting as such, if you see the difference. We are now being asked to bomb ISIS using RAF jets but we have already been bombing them with drones. What’s the difference? We currently have a bombing role over the frontier in Iraq against the same enemy so, if we want to stop them, why not do so?

We are welcomed in by the Syrian ‘government’ but seem to be opposed by many of the citizens of Syria. The Syrian government of course is our sworn enemy whom we are committed to ousting – once we’ve strengthened him by destroying his – and our – enemy. Look harder and you see Turkey, a NATO ally, not just shooting down Russian jets but waging a separate war against the Kurdish Peshmerga who are the most effective force on the ground against…ISIS.

Russia now doesn’t trust Turkey yet they are ostensibly on the same side. (Some Russian revenge is likely at an unexpected moment). Western nations, whose interventions always lead to radicalisation, put people and resources into the effort while Arab nations do what exactly?

Some have joined bombing raids but the reaction has been tepid, both to fighting ISIS and to taking Syrian refugees, even among the wealthy oil nations. Have we defined their role in this conflict? Saudi Arabia and Qatar stand accused of financing and arming anti-Bashir Assad rebels of whom ISIS is one.

‘The Saudi, Emirati and Qatari approach has been to sign a check and let everyone else deal with it,’ according to Sarah Leah Whitson, executive director of Human Rights Watch. ‘Now everyone else is saying, That’s not fair.’

What about Britain’s role? The trial of a terror suspect was abandoned in London in June when it became clear British intelligence he had been arming the same terror groups he was accused of supporting. It was a joint mission with the CIA operating a ‘rat line’ for arms to go from Libya to Syrian opposition to Assad. (We have been arming the very people we now want to fight).

The EU imposed an arms embargo on Syria in 2011 but several states – led by the UK and France – lobbied to be able to supply arms to ‘moderate’ forces in the opposition and foreign ministers agreed to let the embargo lapse two years later. There is no official evidence of direct EU arms going to rebels though…

This is a toxic mix of conflicting loyalties and dubious objectives. But let’s put all that to one side for a moment and decide we do want to stop ISIS. Nobody says RAF bombs will do that. The only way to achieve success is to ally the bombing to a multi-national military force which is mandated by the UN. It must include troops from the Gulf area not just our personnel. This is the only way of militarily eradicating ISIS.

At the same time, all financing channels for ISIS must be closed off through the international banking system. No country should be allowed to buy the oil which pays for the terrorists. The UN should sponsor a peace conference to organize an agreed outcome for Syria which rebuilds the country, endorses a representative government, prevents reprisals and prepares for a mass return of refugees. The root cause of terrorism should be addressed to block the rise another version of ISIS.

Impossible? Of course. We do want to get rid of ISIS but not that much. There are too many vested interests and embedded attitudes at work here for anything other than a cursory mini war. If the great nations really felt threatened the impetus for action would be unstoppable and, instead of dreaming of his peace-with-Iran legacy, Obama would be leading it and demanding action from Tehran and the Saudis for a start.

The grim truth appears to be that Paris is now just one of those occasional horror shows that scare us for a week and then fade. Remember the Spanish train attack in 2004? 191 killed and 1800 injured by al Qaeda. They come and go like plane crashes. We shudder and thank our lucky stars.

But let’s not pretend our political masters are totally committed to beating this and then ensuring there is political and economic stability afterwards. This is all about doing something and hoping for the best without knowing what or ultimately caring enough. Cameron wouldn’t risk a vote when he thought he might lose because a red face meant more to him than ISIS. General Dannat, former head of the Army, said Britain had to bomb to be ‘part of the club’. We have to be with the big boys, it’s our destiny, don’t you know?

So I think I am prepared to back bombing Syria, if there is a UN-sanctioned international force on the ground to finish the job, a systematic programme of stopping the funding and a comprehensive post-war peace plan for the whole Iraq/ Syria/Iran theatre. In other words, I am effectively a No.

The Arab Spring: We need to offer assistance to our...

In Scotland, whose media is it anyway? – A view from...