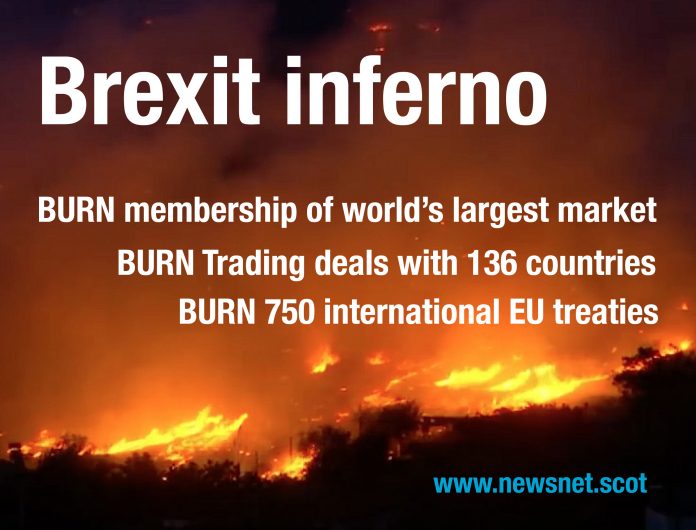 Dorothy Bruce takes a look at the difficulties of falling back on WTO rules as the Brexit inferno of the UK’s trading relationships threatens a wildfire.

The UK and the EU filed documents on Tuesday at the headquarters of the WTO in Geneva laying out their terms of trading with the rest of the world after Brexit.

The World Trade Organisation (WTO) started life in 1995, replacing the General Agreement on Tariffs and Trade (GATT), which had been around since 1948. The WTO is the largest international economic organisation in the world and “deals with regulation of trade in goods, services and intellectual property between participating countries by providing a framework for negotiating trade agreements and a dispute resolution process aimed at enforcing participants’ adherence to WTO agreements, which are signed by representatives of member governments and ratified by their parliaments.

Bryce Baschuk, a Bloomberg Correspondent writing specifically about the World Trade Organisation, had a long and enormously informative thread on Twitter on Tuesday evening about the WTO, its rules, and the complications the UK will face before even getting to trade under WTO rules.

A video is now available on the LBC website of James O’Brien, on his phone-in programme, in conversation with Baschuk. O’Brien who, given the way Brexiters are bandying about the delights and ease of trading under WTO rules, was somewhat taken-aback to learn that the WTO path was far from the straight, sunlit highway portrayed by Brexiters.

Brexit ‘positives’ may not be what they seem

The positives are that the UK would be able to strike new free trade deals with countries such as the US that it believes it wouldn’t be able to do whilst a member of the European Union. Another plus for Mrs May, who from her antagonism towards it appears to have a deepset problem with the institution, is that the UK, would not have to comply with the European Court of Justice. Therefore it would have more independence or sovereignty over its trading relations.

But nothing is ever as it seems, and rarely are such relationships as straightforward as usually portrayed. Every organisation has its binding rules and tangling red tape.

The WTO comprises 164 members, 136 of whom the UK already has deals with through EU, and 23 observer governments. In addition to states, the European Union, and each EU Country in its own right, is a member.

The EU, under the Article 28 process, will renegotiate with the 136 other countries, who, to compensate for loss of the UK market, will each be anxious to gain increased market access from the EU’s 27 remaining members. The EU even after Brexit will remain a large and desirable market with which to have trading arrangements.

The UK plans no such root and branch approach and intends only technical changes to its current commitments. The UK is of course currently a WTO member in its own right, but it doesn’t have an independent schedule of concessions for the WTO (a menu upon which the UK trades with the rest of the world and which it needs in order to strike trade deals) as, until Brexit, it would have come under the EU’s schedule. Instead of following the EU’s process of negotiations, the UK wants to replicate its current trade WTO commitments by “making just a few technical changes and then submitting it to the WTO for certification.” Baschuk explains what’s wrong with this belief. “The problem is that the UK’s terms at the WTO are enshrined in our membership of the EU, so this approach seems optimistic as our market will be smaller than the EU’s market.”

Baschuk believes the failure to assert an independent UK schedule could leave Britain without a baseline legal foundation on which to trade when it leaves the European single market and customs union. The stumbling point for both the EU and the UK is the their proposal to “apportion” their joint tariff rate quota (TRQ) commitments, which set import limits on sensitive goods such as beef, lamb, and sugar. He says some countries have warned that the proposed TRQ split is too rigid and would prevent companies adjusting their shipments of goods to either the EU or the UK if, in future, trade flows alter. So Britain and the EU are expected to ensure countries entitled to access rights are no worse off than at present.

The other countries in the WTO have 90 days to raise their objections to the UK’s approach, indicating ways in which their own trade might be affected. All WTO members have a right to say whether their trade would be affected. The US, Brazil and New Zealand have already said they don’t agree to the UK’s plan. Countries can, and are likely to object to the WTO secretariat’s certification of the UK’s schedules, and mire the renegotiation of the EU’s schedules.

Then the hard negotiating begins, with most countries determined to gain greater access to the lucrative EU market. But, as with Brexit, the clock is ticking. While there is still time to negotiate a solution, the door is closing as the UK will no longer be an EU member after March 30, 2019.

Brexit: UK trade WTO commitments could be mired for years

Baschuk believes many WTO members feel these talks will eventually end in dispute settlement proceedings “to determine the legality of the UK’s rectification bid and the EU’s Article 28 renegotiation effort.” If this happens it would mire the UK’s trade commitments for years.

So along with negotiating its conditions for leaving the EU, and working on trade agreements with it and presumable the US, the UK will also be fighting to fend off objections from WTO members and attempting to negotiate the terms of its membership with it. Baschuk issues a further heads-up: “a decision may never be rendered if the US continues to block the appointment of WTO appellate body members.”

Multi-tasking at its most challenging! Given the shambles we have already witnessed in the Brexit negotiations, can we be confident the Tory government under Mrs May can also wrangle on a second front?

Baschuk issues a further warning: “There are no sharks in Lake Geneva, but the WTO is full of them. They smell blood in the water and they’re going to demand their pound of flesh.” 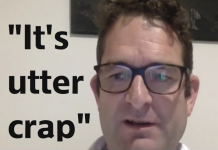 Strange tale of Mike Toffee Hammer and the Brexit Affair