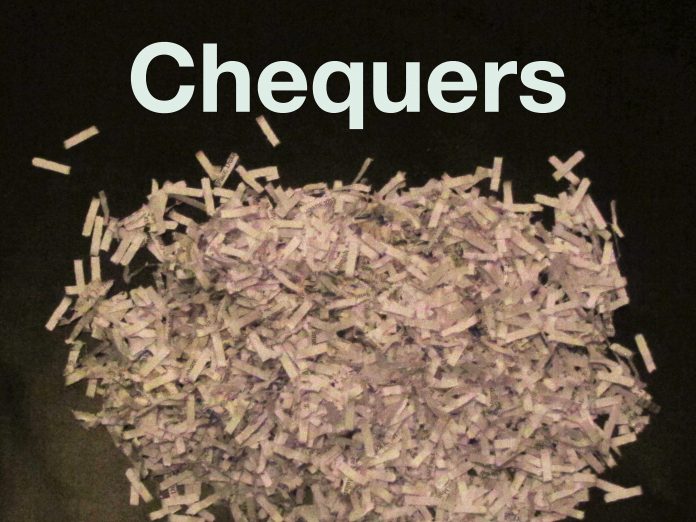 When Neville Chamberlain returned from Munich in 1938 he came back with a useless piece of paper. ‘Peace in our time’ was not to be. Europe is a safer place today through over 40 years of collaboration between sovereign European states.

Mrs May returned with her Chequers plan shredded into angry confetti. Chequers did not have any significant support in the UK and was never going to fly with European leaders. Theresa May is a bunker politician. She survived 6 years as Home Secretary in the Home Office bunker. A Prime Minister cannot live in a delusional bunker and expect to gain respect in the international community.

Yet she came back and demanded respect from the EU after a disrespectful performance that turned her European ‘colleagues’ into opponents when they had been willing to give her a little hope over a few bits of Chequers so she could get through the Conservative party conference.

No matter how often it was spelt out, as it has been since the EU referendum in 2016, that the 4 freedoms are indivisible May has refused to accept this, convinced it is just a negotiating tactic on the part of the EU. Her abrasive stance and disrespect for her fellow European leaders blew her chances of returning with a few kind words.

As months turned into wasted years since the referendum, the EU has made clear there are two choices open to the UK. Stay in the Single Market and negotiate a relationship based on the Norway model. If that does not suit then a Canada style deal would be the only option. They even produced diagrams setting out a way through a process that a child of seven could understand. But not apparently Mrs May, nor her ministers nor her party.

Talking to EU countries individually, the British divide and rule strategy, lashing out at the meeting, demanding recognition of British exceptionalism and Gove promoting the idea Britain could just change the final agreement later, left EU leaders and negotiators with no choice. Polite explanations, ignoring the Brit awkward squad and giving May kind words and air kisses to get her through a difficult party conference could no longer hold. Like Icarus, May’s wings melted, as the political tension and temperature rose.

Her ministers had found no support on their European tours other than polite and restrained advice to just actually start resolving matters at the negotiating table. There was some backing from Hungary’s far right government led by Viktor Orbán who said he would back May. When he had the opportunity to do so he sat on his hands.

With 186 days left until the UK exits the EU May’s stance has just reduced her scope for reaching agreement. The EU had suggested an extra month for resolving some residual issues might be possible if the key issues were nailed down before the agreement was presented to the 27 EU members. The deadline set for the meeting of the Council of Ministers is 18th October. Just 24 days away and just 14 days after the end of the Conservative party conference.

Chances of the arrangements being made to put this back to November have narrowed as this will only happen if agreement is very close and legally watertight before 18th October.

War-gaming, meltdown and Boris as Icarus

Number 10 staff members are war-gaming for a November election according to the Times but with just 14 days, including weekends, chances of a positive future trading relationship with the EU will be long past.

Boris Johnson in his f**k business rant also admitted the immediate result of Brexit would be economic ‘meltdown’. The Brexiteers will blame it all on May, that is why she is still PM. They will seek to come to power promising to fly you to the sun. Bumbling Boris will make everything come right, sort out the May mess in a twinkling and Britain will be a global power again and he has a new better British wax for his wings that will not melt when he plays Icarus for the cameras.

A divided Tory party is now even more fragmented with different proposals emerging almost by the minute. The Guardian reported Dominic Rabb as saying: “What we are not going to do is be dictated to. The UK is one of the biggest economies in Europe if not in the world. We have come up with a serious set of proposals … We are not just going to flit from plan to plan like some sort of diplomatic butterfly.”

So that’s No Butterfly Rabb holding on to Chequers amid reports this morning the cabinet are the United Chequers Tory Party. Meanwhile in London town, hard Brexiteers are mustering as the United Chuck Chequers No deal Tory Party. Faisel Islam tweeted: “At IEA free trade deal launch attended by many top Tory Brexiters, Shanker Singham says that Chequers’ common rule book is seen in the US Trade Representative office as precluding a US-UK trade deal, same with Trans Pacific Partnership now known as CPTPP.”

So there are some good bits in Chequers that would protect the UK from US imperialism, as the EU acknowleged.

Tory divisions are shaping up like the pea soup fogs of the 60s. Nothing sharply defined as a basis for progress. Confused? well it gets worse The Chequers Tory Party are divided on immigration policy. May and Home Secretary, Sajid Javid want common rules for immigration so only the high skilled can come. and from any country. Hammond, of the Give A Better Deal to EU Citizens Tory Fragment wants to give EU citizens preferential access to the UK.

Then there is the It Is All About Boris Tory Party financed by the Telegraph with his regular Monday rant and rage.

Next there is the Canada style deal and Canada plus plus (no chance) groupings gathering as the Canadian Style Brexit Tory Party. The Brexit purists dislike this option as it would mean actually agreeing a deal with the EU and the UK would not be out on its arse on 29th March. A Canada deal could even result in a transition deal and end the chance of a total break in 186 days. Tick Tock speed up the clock.

Almost finally, there is no end to the fragments, we have the Moggie 18th Century Tory Party who announce new papers then withdraw them as unsuitable for publication because, well there are contradictions that might be picked up and cause confusion.

A general election anyone?

If May opts for another snap election, or one is forced on her by a no confidence motion in the Commons it will be articulated on familar Brexit themes:

“The EU wouldn’t listen to me… they were rude but I held my nerve and just about held back the tears… Donald will help us out, all he wants is the NHS… end of food standards … to put our farmers out of business with chlorinated chicken and hormone beef… global Britain will be a client state under Trump but we will be out of the EU and that is what I promised.

“So dear people of Britain that’s all better than being beholden to Europe who insist on their four freedoms, want to maintain environment standards, those awkward social regulations that protects people in employment, common environmental standards and they actually want to stand up to dominant US companies making them pay their taxes and curb their monopolistic instincts.

“And let me be very, very clear I will stamp out poverty. My departments will work tirelessly to send those in poverty to an early grave and make life impossible for the disabled so they are no longer a burden to the rich.’”

A chocolate box England awaits true believers and fools of the realm.

Newsnet: “One moment Mrs May, that is not your Chequers Tory Party position”

Newsnet: After your conference you have 14 days to get a deal. Are you confident that you will achieve in 14 days what has eluded your government in 18 months?

Mrs May: Are there any other questions from the media? No. I have to talk to Donald.

Newsnet to fleeing Mrs May: Donald? is that Trump or Tusk?

So Brexit means out and a fight for leadership of the Tory party with the possibility of a general election as Hard Brexit could become a virtual certainty in little more than a few days time. There is every possibility that the government could face and lose a vote of no confidence. Does May then immediately trigger a General Election to forestall a leadership challenge?

The outcome is decidedly uncertain with the Tories still ahead in the polls and she could just win enough to form a new government. She is not a natural gambler, so uncertainty prevails for the immediate future and beyond. She would have nothing to lose by thwarting a leadership challenge. If she comes out ahead she would be difficult to challenge for a while. If she loses then Boris becomes leader of the opposition instead of PM.

You might say it’s heads May wins, tails Boris loses.

Correction made to the first line of this article. Neville Chamberlain was Prime Minister in 1938, not Joseph Chamberlain.