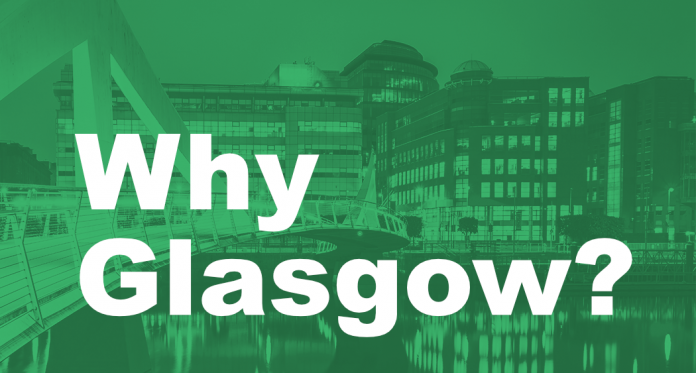 Molly Pollock looks at some of the criticism levelled at Glasgow as a choice for COP26 and finds out the city has a great deal of experience at handling large international events and has the wider facilities beyond main venue such major events spawn. On top of which the world’s media will be arriving, needing the communication facilities a large city can provide.

Some people, concerned by the disruption that COP26 and its 25,000 delegates will cause to those who live in and around the city between 31st October and 12th November, are asking why is the event being held in Glasgow?

Unionists, and in particular Douglas Ross of the Scottish Tories and Anas Sarwar of Scottish Labour have been at great pains to decry the rubbish and rats that they say blight the city, as if no other city suffered from such problems. Cameras and phones clutched in sweaty hands, unionists have scoured the city in search of rubbish to photo, though none has as yet produced a photo of rats, apart from a large blow-up one used by a union in a photo stunt.

According to the COP26 website the city was chosen by the UK government (though perhaps there may have been hints dropped by the UN) because of “its experience, commitment to sustainability and world-class facilities” and also has a proven track record of hosting events on the international stage.

Boris Johnson has certainly caused bad feeling by his insistence that Nicola Sturgeon, our First Minister, won’t be allowed to be amongst the movers and shakers. Nevertheless she will have a visible and important role to play as chair of Under2, a coalition of subnational governments that aims to achieve results through their own discussions and through persuasion of the larger nations.

The UK government, unlike previous governments who hosted a COP conferences, refused to fund the Conference of Youth, the UN’s official event for young people traditionally held before COP conferences. The Conference of Youth, now in its 16th year, is regarded as essential in helping young people prepare for their participation in the summit. With the UK government refusing funding, the Scottish government stepped in to provide funding for the event.

Tonight (Thursday) the First Minister addressed the opening ceremony of the Conference of Youth and welcomed delegates from over 120 countries who will be representing the voice of young people at COP26. She said the idealism, creativity and sense of perspective that young people bring to this issue will be a huge asset and help ensure a more successful outcome.

So, no place at the top table but we have to fork out to cover the parsimony of the UK government which appears to have done little in the way of preparation for the event. Makes you wonder how serious Boris Johnson and his mates are about tackling climate change and whether they actually want the COP26 success that Nicola Sturgeon is working so hard to achieve.

Despite the First Minister not being at the top table a number of politicians, Consuls and Governors from Europe and America started beating a path to the door of Bute House a number of weeks ago, to discuss COP26 and other matters of mutual interest such as trade…and possibly even Scottish independence.

It was heartening to read Patricia Espinosa’s tweet about her visit.

Then today another visitor arrived. This time Sima Bahous, who has been Jordan’s Permanent Representative to the United Nations since August 2016, and who was appointed as Executive Director for UN Women in September 2021.

“…ahead of her leadership of COP 26” – what a wonderful phrase!