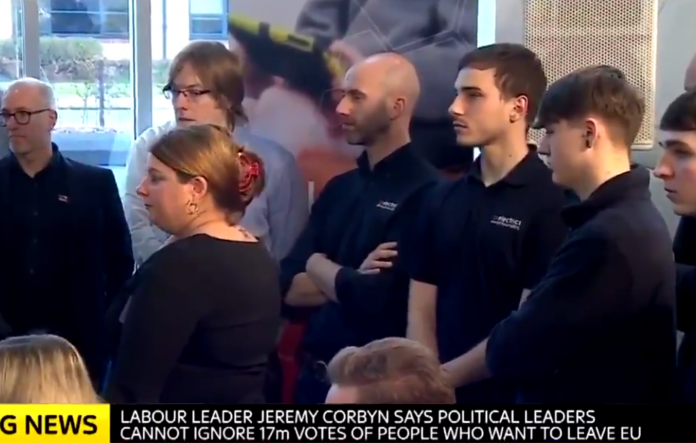 Jeremy Corbyn visited Wakefield to set out his and Labour’s version of Brexit for leaving the EU. Short story he wants a bit of the Customs Union and a bit of the Single Market, but that was as far as it went.

This was Corbyn means Brexit. The small move is a small improvement on May’s criss-cross of red lines. For that it is welcome but whether the EU would re-engage should Labour manage to form a government is open to question – as is everything else in this Westminster mismanaged process.

He was on more comfortable ground speaking on social issues, austerity, homelessness and the threat of US health care companies to the NHS. All important issues that need to be addressed but the connection between remaining in the EU as the best means to protect jobs and generate the income to make these much needed changes to our society was absent.

The event was hosted by Wakefield company, OE Electrics. Our image from the Sky coverage shows the impact he made on his audience as he left to the murmur of muted clapping. The faces tell the story of the day. Those in fleeces and tees with the OE Electrics logo brought in the swell the audience are distinctly underwhelmed.

The younger workers on the right comprise the very demographic Corbyn and Labour need to enthuse and engage with to have any chance of forming a government.

Brexiteers are deluding themselves, but still hope you will believe them

Markets and currency enter Brexit uncertainty with no course charted ahead

Europe solved the problem of Britain: only the SNP can save...