It isn’t Corbyn who needs to change, it’s the system. The common narrative from the usual suspects in British politics and the cheerleaders in the media is that Jeremy looks wrong, dresses badly, is shambolic, is too left wing and generally doesn’t fit the mould of a leader.

But whose mould? As Scots found out long ago, in the UK there is one way of doing things and that’s Westminster’s way, be it appointing chaps from Oxbridge, covering up their paedophilia, avoiding their taxes, ordering society to suit their own self-selecting elite and, of course, running government and its extended arms in quango-land like a public school.

It’s an environment where only English middle and upper class types feel comfortable but which demands that lesser sorts adapt and conform or find their progress blocked. Some of the most artful assimilators are Scots.

The outriders in the British press play along with the charade that Britain, with one of the most backward and counter productive governing processes on earth, is the epitome of a civilised democracy. Anyone who dares challenge the 19th century assumptions behind this theatre of the grotesque is deemed to be a threat or a nut job to be mocked and rejected. Instead of performing the role of challengers, a whole generation of ostensibly left wing MPs, working with the dutiful trusties in the media, has pretended that Britain is a fair society run by a democratic government when almost every measure says otherwise.

We have an out-dated and unrepresentative voting system, a massive unelected revising chamber with over 20 clergy complete with Ruritanian titles and outfits, soviet centralisation of power, institutionalised tax avoidance, presumption of superiority based on schooling, social mobility in reverse, ritual bellicosity despite barely functioning defences depleted to retain an unusable weapon of mass destruction…and now on the brink of epic isolation because of a thinly-disguised fear of solidarity with fellow Europeans whom our fathers fought to free but whom we now reject.

The house rules may be incomprehensible but they must be obeyed – that’s the British way. Unyielding adherence to what has always been overrides logic and human development. Thus a Prime Minister must fit the identikit. Even if he has avoided Eton – and 19 of them didn’t – he must behave as if he were effortlessly part of the elite, at home on the rear seat of the ministerial car, in universal dark suit, no regional accent, comfortable beside the flag, earnest in singing the anthem, loyal to Monarchy even if privately questioning and, of course, presumed to be devout even if never challenged on faith. The sole female has, despite her gender, fitted in perfectly and delighted in outdoing the males in belligerence.

Put simply, you have to be the right kind of chap and Jeremy ain’t. While Cameron looks like the hip bank executive on his bike, Jeremy seems to be on the way to his allotment. You suspect he still has those cord suits in a wardrobe and keeps LPs of Steeleye Span and Fairport Convention. He doesn’t sing God Save the Queen but knows the words to the Bandiera Rossa. If he shaved, got a navy suit made, wore a cutaway collar and a club tie, he would earn the respect of the myopic cognoscenti for whom presentation is all.

In other words, Jeremy is much more typical of the British people than 99 per cent of the greasy-pole climbers in Westminster. People can’t see him as a leader because they’ve been trained by the system to expect certain traits that define the role. When he conducted what was a pretty sensible and in some ways ruthless reshuffle, he didn’t meet the timetable set out by the adjudicators. They insist the ducks are lined up first and a brisk exercise in hire and fire is completed to present a line-up in time for the Six O’clock News. When it took too long and nobody told the hacks what was happening, it became clear to them that he didn’t know what he was doing. He was in fact doing it his own way but that’s not allowed under the house rules. You could hear the Tut Tut in the correspondent’s reports. ‘This is not how we expect it to be done.’ 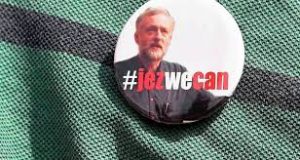 Professional arrogance and absence of self-awareness means much of the media is incapable of performing its proper role of scrutiny of power (of which Jeremy has effectively zero). Journalists are spoon fed through conduits from the powerbase and follow the narrative they are given. As an example, have you heard a consistent questioning analysis of the failure of Osborne’s economic policy in which almost every forecast is wrong, national debt is at £1.6 trillion, personal debt is soaring, child poverty is a deliberate consequence of policy and we are dangerously reliant on an over inflated banking sector? Look down a list of journalists’ names and the organisations they work for in Whitehall and you realise that the criticism of an ‘unchallenged SNP’ in Scotland is exactly what the British have in London. A combination of media owners, their executives and political staff are all part of the ruling system, mirroring its obsessions and following its agenda. Thus a party which seeks self determination, a right enshrined in the preamble to the UN Charter of Human Rights, must be composed of cranks out to destroy all we hold dear…ridicule them, demonise them, destroy them. Thus a man who fails to conform to their self-imposed rules deserves the same – ridicule, demonisation, destruction – but only when he is a threat, of course. It’s OK just to laugh when he’s on the backbenches but when his presence causes the candle of power to flicker, it’s time to do the Establishment’s job and attack.

The media’s story, fed by open briefings from the disaffected, becomes the norm and the people judge accordingly. It is why Jeremy is probably doomed one way or another. He isn’t so much taking on the Tories as taking on the entire vested interests of Britain, his own party included.

None of this surprises me. Foot suffered similarly, so did Red Ed. But there’s a couple of ways he could help himself. He needs to change the agenda himself and divert attention from Jeremy Corbyn, Labour leader to Jeremy Corbyn, policy maker.

I supported his election (from outside!) because it is clear to all that Labour has lost its mojo and is in need of a radical overhaul. I believe Jeremy is the man who can be the catalyst but merely trying to redirect from the general’s chair is never going to be enough.

Labour is in need of an internal debate involving all members in all parts of the country to redefine what the party’s purpose is, who it stands for and what it’s up-to-date principles are. He has a nationwide network of officers who can pull together local groups. He has social media at his disposal. He needs a personal tour. He risks becoming a wounded beast confined to Whitehall when outside the London bubble there is a population waiting to be engaged. The disproportionate growth of membership among London’s young and international community is, while a good thing, deeply worrying for the expansion of Labour’s core appeal across Britain. A national discussion in which set questions can be asked, templates for the future discussed and nothing excluded is a simple exercise which can engage voters and educate the leadership. The disconnect between Corbynistas and backbenchers can be resolved by asking Labour people who better represents what they want. A Corbyn Convention can move the focus away from the London hothouse and generate an enthusiastic public response. Members are already polled on specific policy areas but that doesn’t reach down into the culture and ethos of the party and discover why people remain or have departed.

He also needs an idea to define his leadership that isn’t about division or about him. Welfare, justice and housing are all ripe for change but represent the normal nuts and bolts of domestic policy that voters think are to hard to understand let alone change. A bigger, stand-alone idea is needed. What better than a radical overhaul of the state to splinter Westminster control and open a door to disaffected Liberals than to adopt federalism. The people are sick of tired, cynical politics and the accretion of resources to London and the South East. A federal structure is a perfect fit for a state of four nations although within England itself there is such a disparity between north and south that some refinement is required. But just offering that hope to northern England would re-engage voters.

Devolving all but the most macro areas of government is what many in celtic UK would settle for and could be the understated hand that holds back the SNP. Hand-in-hand goes abolition of the Lords, no longer opposed by anyone serious about a parliamentary system. A smaller representative revising chamber would be a simple winner. Taking over the Liberal mantle as champions of PR offers an opening too – it just needs to be sold with passion.

It is the grinding state machinery and its attendant guards and greasers that blocks the progress of Jeremy Corbyn. What better response than its overhaul and reform? Laying down a framework for a modern state would be a fine legacy for a Labour leader irrespective of whether he endures or fades quickly into history.

Fracking ‘ban’: A firm stand against the unacceptable, or gesture politics?