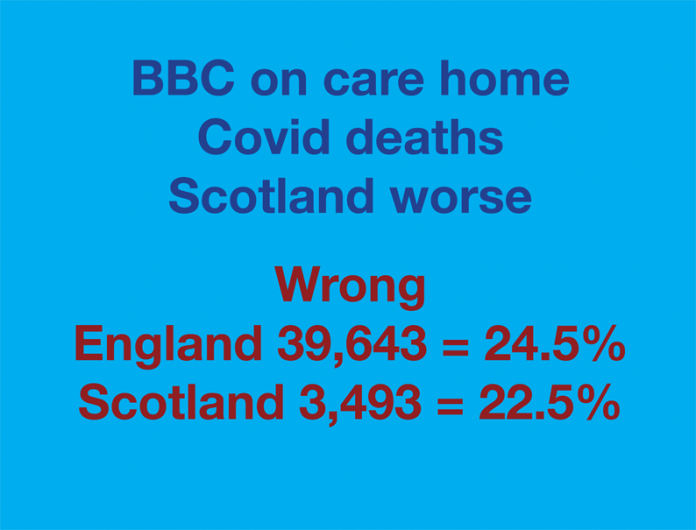 How many times have you heard reporters claim that Scotland has the highest Covid care home death rate in the UK? We’ll wager it’s more than once. Indeed it’s been reported so often that many folk assume it must be true. But it isn’t true.

It started early in the pandemic when BBC Scotland seized on data released by the Scottish Govt that showed a quarter of all Covid deaths were happening in care homes. On April 15th, Reporting Scotland highlighted the figure in a news report. The corresponding figure for England & Wales stood at a mere 2%.

The figure for Scotland was accurate. However what wasn’t accurate was the attempt to suggest things were worse in Scotland. The reason the figure for England and Wales was so low was because the UK Govt wasn’t yet compiling the data. This was revealed in a BBC news report on April 17th 2020.

But it was too late. The myth that Scotland’s care home situation was the worst in the UK was off and running.

On April 22nd 2020 the BBC reported that Scotland’s care home death figure for the previous week was a staggering 651. The figure was false. The 651 figure was the total number of Covid deaths between April 13-19 across Scotland as a whole, not in care homes. The corporation issued a quiet apology.

Despite no data to back up the claim, a string of BBC presenters began reporting that Scotland’s Care Home Covid death rate was the highest in the UK. On April 26th 2020 Andrew Marr interviewed Nicola Sturgeon and claimed Scotland’s care home death rate was worse than England & Wales.

The lie has persisted despite having been challenged time and again by SNP politicians. It was trotted out during the recent Scottish election campaign when Nicola Sturgeon was confronted with it in a live interview on SKY News.

Only last week BBC presenter Clive Myrie, when interviewing SNP MP Dr Philippa Whitford, claimed “there is consensus” that the handling of the situation in Scottish care homes was a “disaster” and that Scotland had one of the highest care home death rates per capita “anywhere in Europe”. The SNP MP rebutted the BBC host’s claims citing research carried out by the Nuffield Trust and the London School of Economics.

So what’s the truth? The truth is that the Tory Government was slow to start compiling data for care home residents in England. This gave England an artificially low Covid death rate at a time when the Scottish Govt was compiling and publishing comprehensive data. By being so efficient, the Scottish Government unwittingly handed the BBC a stick to beat it with.

One year on and with data for Scotland and England now available to compare, guess what? It shows the Covid death rate for care home residents is actually lower in Scotland than in England.

Since the pandemic began official figures for England show that there have been 162,109 care home deaths. Of that 39,643 were Covid related. The respective figures for Scotland over the same period are 15,433 and 3,493. In Scotland 22.5% of care home residents died from Covid. In England the figure was 24.5%. The difference isn’t much, but it’s clear enough. England, not Scotland, has the worst Covid death rate for care home residents.

It isn’t a league table, and these were people with families, many of whom denied the opportunity to be with the deceased before they passed. However it should lay to rest the politically motivated lie that Scotland’s care home death rate is the worst in Britain. It isn’t and it never was.

There is now no excuse for any BBC reporter or presenter to claim Scotland’s care home death rate for Covid is the highest in the UK.