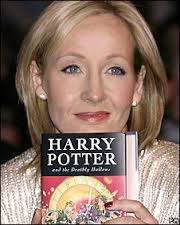 I find a great deal to admire about you. Despite your stellar success, you seem to be a warm, caring, decent woman who has never forgotten the struggle you had before Harry Potter brought vast wealth.

If you’re not already the first author to become a billionaire from book sales then you must certainly be on your way. Of course, fame and fortune inevitably detaches people from the humdrum reality of everyday life but I sense you keep yourself rooted to the here and now.

The daily grind of living on benefits and bringing up a daughter on your own hasn’t been forgotten as I know you have given tens of millions to charities and good causes.

Over many years you toiled in poverty, perfecting the art of good writing – brilliantly pulling readers into your orbit in a way that only the gifted few can. I know of no professional writer who would begrudge you the rewards you now enjoy.

More than that, you are a fantastic role model for women – a single mother who climbed every ladder to the stars but still kept her feet planted on terra firma. What is there not to like about someone so talented but also committed to helping those whose lives are in sharp contrast to yours?

In your quest for a fairer society you even joined the Labour Party – former PM Gordon Brown and wife Sarah are good friends, I understand – to take on the Tories and oppose their ‘greed is good’ mantra. You are also a passionate Unionist and gave the Better Together campaign £1m. Although I support the SNP and Independence, I accept your view is sincerely held and has no selfish motive, as is mine.

However, my admiration for you is not unconditional. We part company when you insist the SNP still has an anti-English element. This is not the case. Further, it tars everyone on the Yes side with that despicable brush.

In the 60s and 70s I ran a mile from the SNP – as I did from all nationalist movements. The party had too many supporters who were anti-English. Denying that is simply rewriting history.

But the whole world was racist then, in varying degrees – all bad. The fag end of imperialism and empire had left a nasty residue all over the planet in my callow youth but I’m proud of having railed against it since my teens.

Fortunately the world has moved on for the better and we no longer tolerate bigotry. The SNP now must be the most anti-racist nationalist party in history. You must also be aware that civic rationalism is simply a desire to run one’s own affairs – hardly radical or dangerous – and nothing whatsoever to do with ethnicity.

Independence’s greatest asset by far is its inclusiveness. Everything else flows from that. If it’s not then it’s a complete failure and unworthy of even one vote. All the other political and economic issues are secondary – though important and clearly worthy of debate and I welcome your valued input to that.

But when you continually insist I am part of a racist movement, I’m sure you will understand why it upsets so many people who detest xenophobia and have challenged it all their lives.

Scotland is your adopted home and we should be proud that such a caring and gifted person is among us and doing so much to fight injustice and poverty.

By all means, campaign to protect the Union which you clearly believe holds the best future for Scotland and the UK – and I respect you for that. In fact, it took guts for you to take that stance and risk alienating many readers when you could easily have kept your own counsel.

However, with fame comes responsibility. You have 4.8 million followers on Twitter who dote on your every word so you must be aware of the enormous power and influence you have.

Of course, you are sometimes bombarded on social media by the unhinged but all movements have zealots. And you are a wizard with words so you could easily swat them aside without resorting to unfounded accusations.

All I ask of you is to think very carefully before making sweeping statements because I object strongly to this anti-English myth you spread. It’s simply not true.

The JK Rowling I admire is far, far better than that.