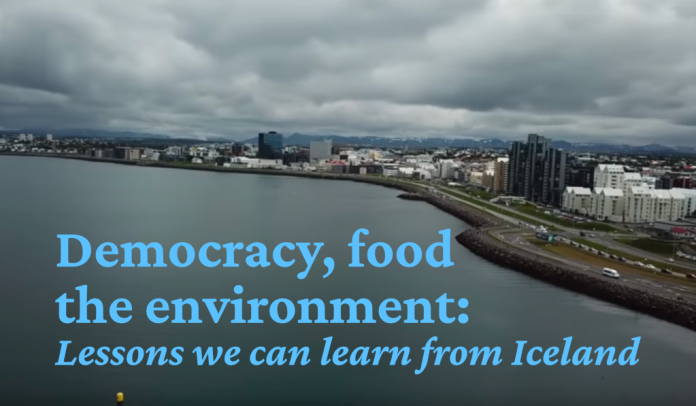 Molly Pollock comments on our Nordic connections and the extraordinary experience of Iceland, one of Europe’s poorest nations when it voted for independence from Denmark in 1944 and is now one of Europe’s richest nations because the Icelanders believed in their country and themselves. Scotland is the richest part of the UK after London and the South East so what are so many afraid of? Plus the film everybody must watch.

I developed a passion for Scandi and Nordic noir during the past year and more of lockdown and isolation. Not grizzly, chiling psychological dramas, but the more interesting crime dramas with their well-developed characters, details of their lives and families, their backgrounds, the glowing descriptions of the Stockholm area with its archipelago of islands dotted with summerhouses, the harsher, more remote regions of Sweden, and dramatic Icelandic landscapes.

The Scandinavian countries were visited on numerous occasions many years ago when DFDS used to sail from Newcastle to Esbjerg and Gothenburg and there was always a feeling of kinship with our northern European neighbours. But Iceland was never visited. Despite that, the books I have recently read by Icelandic authors, and there are surprisingly many of them considering the country’s population is just over 360,000, have left me with a strong feeling of affinity for that remote country. Iceland apparently can boast the highest per capita publication of books and magazines. Not bad for a country with a population equivalent to that of Aberdeen and Dundee.

In these crime novels many similarities can be identified between Iceland and Scotland in the way people in the past lived, earned their livings, their outlook on life. Perhaps not totally surprising as some of Iceland’s first settlers were of Celtic origin from Ireland and Scotland. Icelanders, however, have more confidence than the Scots with a much more positive and can-do attitude. Whereas 300 and more years of being told we’re too wee, too poor, too stupid have taken their toll, making clinging to Westminster’s coat-tails the less risky stance for some Scots.

The Phantom Power Film, fronted by broadcaster and writer Lesley Riddoch, Iceland: the extreme nation appeared nearly two years ago and yet remains very relevant today. Whereas Iceland has reshaped its democracy in the wake of the 2008 financial crash, having jailed many of its bankers in the process, Scotland is still waiting to decide its future.

Denmark granted Iceland a constitution and limited home rule in 1874, and in 1904 this was expanded. Under the Danish–Icelandic Act of Union Iceland was recognised as a sovereign, independent state in a personal union with Denmark. This was signed on 1st December 1918 with a time limit on its validity of 25 years.

Iceland then declared its independence from Denmark in 1944 when Denmark was dealing with a Natzi invasion, the 25 year union having expired the previous year. The Icelandic declaration of independence followed a plebiscite on whether to terminate the personal union with Denmark, abolish the monarchy, and establish a republic. 97% of Icelanders voted to end the union, with 95% in favour of a republic. This compares with only around 50% of Scots favouring independence. As for the monarchy, that still commands significant support in Scotland at present.

The Icelandic climate is not one conducive to growing vegetables, but using their natural geothermal resources and modern technology the Icelanders manage to produce sufficient tomatoes and other vegetables to satisfy demand. Being self-sufficient in food, food security, is seen as essential. A far cry from the proposed UK/Australian trade deal which threatens to decimate Scottish farmers, with Brexit having already dealt fishermen a severe blow.

Then there is the environment. Icelanders were told of the necessity for building numerous aluminium smelters in areas of natural beauty if they wanted to retain their state pensions and other benefits. The clarion call to destroy large tracts of the natural environment was resisted as the Icelanders thought there was a better way forward, and they believe they benefitted from that decision.

And the lessons for Scotand? We need to have confidence, stand up for what we believe in and work for the kind of society we want Scotland to be for ourselves and our children and grandchildren. We need to be innovative, develop a can-do attitude, make technology work for us, and ensure everyone benefits, not just the rich.

But to get there we need independence. We don’t need 97% of Scots backing independence (though that would be fantastic) but we do need a sufficient majority to clearly show the direction Scots want to travel and to ensure we have as wide a consensus as possible for moulding the kind of country we want Scotland to be.

To reach that point we need to persuade more of our relatives, friends and neighbours of the benefits independence will bring.

Watch the powerful Iceland: the extreme nation and pass the link to those still awaiting persuasion to vote Yes.