If Labour has rediscovered its soul, is it time to ask why it lost its voice in the indyref? How is it that 70 per cent of delegates to the Scottish conference can vote against renewal of Trident a year after the referendum,  but managed to stay silent during it?

What kind of proud Scottish socialist now cheering the anti-nuclear vote was so cowed last year that he couldn’t lift his head and raise his voice on what he now claims is a touchstone issue?

I cheered Stephen Low of Unison who moved the motion:

“Its purpose is to detonate a nuclear warhead above a city, killing everyone in its radius. There are other facts about Trident, but that’s the central one, and one we should never forget.

We shouldn’t want Trident renewal even if it were free, but of course it is not free, it comes at an utterly bewildering cost. This is a life and death decision. Let’s choose life, let’s choose to be the change we want to see in the world, let’s cancel Trident renewal.” 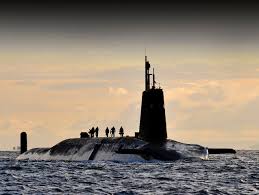 That’s what we could have done with in 2014, yet Stephen was a dogged No voter and his union stayed neutral. Trident may only be one policy area and there are of course many reasons for opposing independence (mostly that it’s a class struggle not a borders issue), but the anti-nuke fervour whipped up by the Labour unilateralists today is in stark contrast to their vow of silence then.

The surest and quickest route to removal of this utterly, utterly useless weapon was to take the decision out of the hands of Westminster and his Labour Unionist establishment MPs. Presumably the answer is that when it came to the indyref, getting rid of Trident and stopping its renewal were less important than retaining the British state. The morality of a mass civilian killing machine and its bewildering cost was of less importance than the morality of Whitehall keeping charge of both defence and the welfare of working class Scots. Solidarity, comrades, even if it kills us…

Many of Stephen’s own members will now face benefit cutbacks because remaining in the UK allowed the election of a ruthless Tory government. To a Nationalist, the Labour maneuvering in order to accuse the SNP of not caring about the punishment of the working poor and their children is another example of the cowardice of the ‘socialists’. Confronted with an absolute means of ending Tory governments for good, they stayed silent and got into bed with those same Tories – not forgetting the other bedfellows from UKIP, the National Front, the BNP and the Orange Order. Now there’s a broad church…

Now that the hard decision is out of the way, they return to game-playing with a promise of dubious legality predicated on sunshine arithmetic as if politics were to them just a game of charades. In order to make the case for ‘restoring the cuts in full’ they must rely on the same Tories to pretend the powers exist to do so, just as they are combining to force either budget cuts or income tax rises on the Scottish government as a means of damaging the Nationalists. Labour and the Tories in Better Together didn’t end on September 19 last year.

Where were Kezia’s class warriors when Ian Taylor’s £500,000 cheque hit the campaign account? I looked in vain, and appealed publicly, for Labour voices to be raised against immoral donations from a source that is an affront to human decency given the genesis of Taylor’s Vitoil fortune.

Douglas Alexander gave a limp quote more concerned that Taylor was a large-scale Tory donor and Henry McLeish, again, was the sole identifiable Labour sources to speak out. We saw the Labour hierarchy, fists clenched, singing the Red Flag in Perth. Did they put their fingers in their ears and hum when Darling accepted the Vitoil money?

The truth is that, however they parade humanitarian and socialist principle, Labour prefer to be out of power and under the Tory thumb every two decades than really standing up for Scots. When your principal policy is bending the knee to your betters and using your tax pounds to make good their brutal cuts, you’ve already lost.

This is the debilitating game Scotland is sick of playing…making good Westminster’s failures and watching as they reduce our politicians to this shallow posturing. David Mundell is now running rings round Labour, making them jump through hoops to reduce the impact of his Tory plans while getting them to do his dirty work of attacking the SNP on an area where there is agreement in principle between them and Labour.

I doubt if real socialists anywhere else could define a more demeaning condition than having your strings pulled by David Mundell. Such is Labour’s soul.

The sterile poverty of the ‘These Islands’ case for no change