By Paul Kavanagh (a.k.a. The Wee Ginger Dug)

You may have heard there’s an election in the offing.  Something else is also for the offing, and that’s the career of Magrit Curran, Labour MP for Glesca East.

Magrit is about to give her name to a foodstuff, like Peach Melba or Pavlova pudding.  Magrit’s toast is dry, stale, mouldy, and spread with invisible Labour jam.   It’s difficult to swallow, and even harder to keep down.

Her career is about to be regurgitated by the electorate of the East End, and a bit like Linda Blair in The Exorcist doing her revolving head thing, projected forcefully into far distant corners.

Why is Magrit toast? Because the Labour Party has treated the East End of Glasgow like a fiefdom for generations.  Labour has taken the people of the East End for granted, it’s treated East Enders as a convenient launch pad for the careers of individuals who regard their voters as a resource.

After 80 years of Labour domination you might just have expected that the East End would have received some of that jam that was always promised, that it might have benefited from some of the fat of the land that was creamed off.

Labour tells us this is how it has to be, this is how it’s always going to be and the best you can aspire to is escape, to leave the grey faces to their unending walk in the rain and the cold against the run down tenements of Shettleston Road.

The local Labour party is a hollowed out shell, empty like the lives that Labour has betrayed and left behind.  The charade of a people’s party without any people, playing musical chairs with opportunity, wheeching away support as it sings the Internationale.  It serves only to get the local MP re-elected.

The fine aspirations of John Wheatley and John Maxton, reduced to a career opportunity and sound bites that pander to big business.  Labour has lost the respect of the people of the East End because it holds us in contempt.  The feeling is mutual.  That’s why Magrit’s toast.

It doesn’t have to be like this.  Alexis Deans knows that.  She’s an East End woman with drive and energy, who’s looked at the world around her and knows that they only way it’s going to change is if she changes it herself.  Labour won’t do it for her.

Alexis joined the SNP, and despite mobility problems she got involved in the independence campaign, helping to run the Yes campaign office in Shettleston Road.  She’s lived through the broken promises that Labour has made to people with disabilities, she’s seen through them.  The referendum campaign taught her what hope felt like, and she won’t ever forget.

Alexis has poetry in her soul.  The East End is like a Swiss cheese, she told me, and we fall through the holes while others get fat on our talents and skills.  She’s disgusted and appalled that here, in her city, in one of the richest countries in the world, for the first time in her life there are people who are starving.

Alexis is scunnered that there are people in Glasgow who rely on the charity of food banks so that they can ensure their children get enough to eat.   Whose fault is that?  She asks herself.  After 80 years of Labour domination things are only getting worse.  Labour can’t protect us from the Tories when it spends all its time aping them.

Something needs to be done, and Alexis is going to do it.  She’s one of those East End women who have been forged in steel and tempered in fire.  And she’s angry.

Alexis spends her spare time running the campaign office of Natalie McGarry, the SNP candidate for Glasgow East.  Originally from Fife, Natalie was brought up by strong women.  She has lived in Glasgow for the past nine years and tells me that she’s come home to Glasgow.  This is her home, this is the place she belongs, she’s come home to the strong women of the East End.  They give fire and inspire and they take no prisoners.

Natalie’s on a mission, to help the silenced find their voices, to bring the marginalised into the centre.  Her job is to listen, not to dictate, to represent those who’ve been misrepresented by the Labour party for generations.

Look out that window, she tells me as we sit in her campaign office in Westmuir Street in Parkhead, a street I’ve passed along ten thousand times.  It’s a window into the heart of the East End, and out of that window you see the broken dreams of the Labour party pass by.  Natalie’s job is to mend the broken soul of the East End, to take its life and passion into the centres of power and give it voice.

It’s not poverty that defines the East End, she says, it’s passion, it’s the talent and skills of thousands of women and men who’ve been abandoned by de-industrialisation.  The people of the East End are its greatest resource, its great opportunity, yet they lie abandoned and neglected by a Labour party that is fixated on securing Labour-Tory marginal seats a whole world away.  It’s criminal.

She tells me that the canvass returns are frighteningly good.  The anger of Natalie and her strong women is widespread throughout the streets and tenements of the East End.  But they’re taking nothing for granted.  A small army of volunteers are working hard to ensure success.

Taking things for granted is how Labour got into the mess it’s in.  It’s not a mistake Natalie is going to repeat, and she’s got an army of strong East End women and men at her back who won’t let her forget.

I leave the office with the dug and the sun breaks through the cloud, lighting up Westmuir Street, shining on a people who despite everything still have poetry in their souls, a people who have learned what hope tastes like.  And having tasted hope, they’ll never again be satisfied with the stale dry toast.  And that’s why Labour has lost the East End forever. 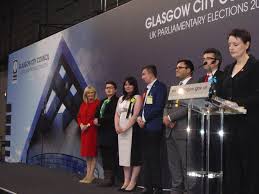 Right or wrong, SNP women accorded early notoriety, but no ‘proof’ yet