Last month’s massacre of 11 journalists in their shabby Parisian workplace sparked what may be the most spontaneous, unmediated social media response the short history of the internet: Je Suis Charlie. 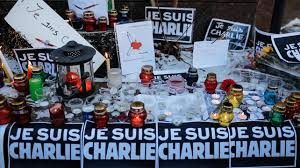 The attack happened at approximately 11.30am CET, with the first newsflashes broadcast before the clock struck noon.  #JeSuisCharlie appeared some 70 minutes after the murderers made their escape from the Charlie Hebdo offices.  By late afternoon it was woven into memes and erupting on virtually every Facebook page in the world.

By evening millions had changed personal profile pictures and cover photos to three little words in every conceivable translation: I Am Charlie.

The next day’s newspaper front pages made ‘Je Suis Charlie’ the default headline.  Our Fourth Estate, whose protections in law are key guarantors of our free expression and democracy, fell over themselves to declare solidarity with France, though very few were moved to reprint the now notorious Hebdo cartoons of Mohammed.

Inside pages had “global reaction” of world leaders and celebrities but also the far more compelling voices of ordinary people.  These voices were many and varied, and soon included rejections of ‘Je Suis Charlie’ from many loathe to associate with Charlie Hebdo’s undeniably leftist, libertarian and (some said) racist, sexist satire.  Some distanced themselves from Hebdo’s famously provocative stance on Islam and religions generally.  Others only wanted to be different from the crowd.  ‘Je ne suis pas Charlie’ began to trend.

Soon ‘Je Suis Ahmed’ appeared in tribute to the police officer executed on the street by the same people who murdered the 11 journalists and wounded a further 11 people in the Hebdo offices.  Beyond this act of solidarity the much maligned Muslim community was now being hounded to outdo themselves in condemning the act.

According to Rupert Murdoch even this was not enough:  Until “Moslems… recognize and destroy their growing jihadist cancer they must be held responsible” – said the man who denied all responsibility for the widespread criminal hacking of people’s personal communications by his own news outlets.

Nor were denunciations enough for the likes of Marie Le Pen and Nigel Farage who made busy with the political hay while echoing Richard Dawkins in declaring Islam to be the “most violent religion”.  The professor is yet to provide any scientific or statistical evidence to back his claim.

As we all know the blood-letting did not end there.  On Friday morning Said and Cherif Kouachi, fugitive suspects of the massacre, were cornered in a siege destined to end in their deaths by police gunfire.  Meanwhile in east Paris Amedy Coulibaly entered a kosher hypermarket and killed four people before telling police he’d kill more hostages if the Koumali brothers were harmed.

Police stormed the store and gunned down Coulibaly, rescuing 15 people. Lassana Bathily, a Muslim shop assistant born in Mali, was hailed for an extraordinary act of bravery in hiding customers in a downstairs refrigerator room.  ‘Je Suis Lassana’ did not trend heavily.

Conspiracy theories were trending.  On Thursday the suicide of Helric Fredou, police commissioner investigating the attacks, fuelled a burst of tweets on hidden forces, notably the assertion the young policeman whose murder was caught on video had not been killed at all, or was killed by the CIA, or the Paris police force, or Officer Ahmed Merabet was working for Mossad / Putin / MI5 / ISIS.  So social media enjoyed one of its most noble moments while simultaneously displaying its craziest and most hateful faces.  That’s free expression for you – all human life is there.

Usual suspects in the power phalanx

On the Sunday due prominence was given to world leaders leading an anti-terror rally in Paris.  Francois Hollande, David Cameron, Benjamin Netanyahu and many more of the usual suspects linked arms in a powerful image beamed around the globe.  That the picture was later revealed as staged in a cordoned-off road well away from the rally, seemed not to matter – the mainstream media duly presented the image of sombre world leaders united at the head of an historic march.

In Scotland our constitutional conversations have brought a blooming of strong alternatives to the mainstream media.  Outlets like Bella Caledonia and Newsnet.scot published the image in wideshot where the power phalanx was revealed to be walking down an empty boulevard.  Records of many were explored and found riven with war crimes, torture, imprisonment without trial, harassment of journalists, black propaganda, extraordinary rendition amongst many other human rights abuses.  And it wasn’t only the UK Government. 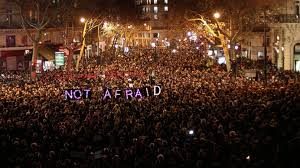 ‘The National’ delivered one of the most moving front pages, eschewing Je Suis Charlie as a headline, going instead with a memorable and widely-used image of a Parisian crowd holding torchlights to form the words, “NOT AFRAID”.   Fear, however, is the spur for David Cameron and Theresa May to legalise even greater surveillance of your life, allied to a kind of super-encryption of anything pertinent to “national security” – however they wish to define that.

This kit can pick up not just “terrorists” but organised crime, “benefit scroungers” and paedophiles!  Industry experts scoffed at this as technically unworkable headline-grabbing drivel – the economy would collapse under an all-encompassing super-slowed tangle of encryption barriers.  Surveillance is, however, already well-established and colleagues at English PEN continue to pursue the UK Government through the courts on GCHQ’s illegal snooping on UK citizens, including on behalf of the American Government.

Is anybody Charlie any more ?

So I’m writing this five weeks on from that terrible January day.  Is anybody Charlie any more?

I live in a sleepy little village in Perthshire, so sleepy that in January the sunlight barely peeps above the surrounding hills.  Two doors down the general store is run by Khalid, who happens to be a practising Muslim.  Five weeks ago he pasted a ‘Je Suis Charlie’ sign to the front door of his shop.  It’s still there.  He finds comfort and protection in the words.

PEN International is the world’s oldest continuous human rights NGO and the only global association of writers. Scottish PEN is one of its 147 centres across the world dedicated to the promotion of free expression and world literature.  In 2014 PEN worked on nearly 1,000 cases of writers imprisoned, tortured, threatened, censored, exiled and murdered, including acts instigated by governments whose leaders linked arms in Paris.  Writing can be a lonely business at the best of times, but PEN’s worldwide community of writers provides crucial support for any who dare to speak truth to power.  Indeed, PEN has been ‘Charlie’ in every language and in every country for close on a century now.

This Friday, February 20, Scottish PEN hosts a public event at Summerhall in Edinburgh. The panel includes journalist Joyce Macmillan, author Alan Bissett, and cartoonist Greg Moodie, perhaps Scotland’s edgiest satirical talent in recent times.  What do they think of the situation in Scotland?  The UK?  Are they now or have they ever been Charlie?

I don’t know their thoughts on the implications of all this, or what they’re going to say on Friday but I do know it will be worth hearing.  Why not join us?

Drew Campbell is the President of Scottish PEN.

‘Are We Still Charlie’ at Summerhall on Friday February 20. Tickets are available from www.scottishpen.org price £4/£2.