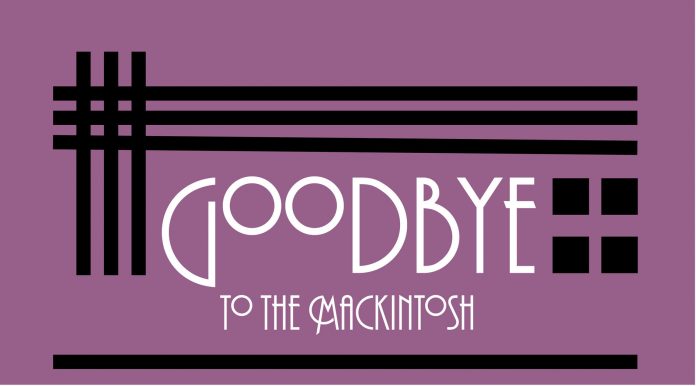 What can you say when a building burns down. If a factory or empty structure then you probably don’t say anything – wonder perhaps at what might go up in its place. But when it’s a building like the Mackintosh School of Art then again there are no words. How can words express what Glaswegians and so many others feel about a building described by that overworked word ‘iconic’?

The Mackintosh or the Mack as it was locally referred to, was part of Glasgow’s, Scotland’s, Europe’s and international architectural and cultural heritage. It was also a renowned academic institution, internationally recognised as one of Europe’s leading university-level institutions for the visual creative disciplines.

it heralded the closure of an era of classical affectations and stuffy decor, reimagining and reinventing structure, spaces and interior designs.

Charles Rennie Mackintosh was a young man when he ripped up the design manual and developed a style uniquely his own though with acknowledgement to the Art Nouveau movement in Europe. Mackintosh’s style isn’t referred to as that but as Glasgow style in a period when Scottish artists were studying in Paris, influenced by Impressionism, while England was revelling in its Arts and Crafts movement. Art in Scotland at this period was said by experts to be much more aligned with modern movements in Europe than was England which embraced a version of the past.

I’m no expert in art. I’ve merely dabbled in painting and drawing courses, done a few classes in tapestry weaving, visited numerous galleries, and have known artists. Oh, and I spent years obsessed with researching and writing a book on Alexander Reid and those around him at that period. The resulting book never got into print as publishers seem to have a blockage when faced with anything to do with art, despite my manuscript being a biography rather than a book about paintings. But when you write about Reid art has to find a place in the narrative. Reid was the Glasgow art dealer who lived in Paris’s Montmartre, and for some months in 1876 lodged with the Van Gogh brothers, working in a local gallery with Theo whilst being painted a number of times by Vincent.

I don’t know how well Reid might have known

Mackintosh, but all those in the artistic scene in Glasgow and indeed in Scotland at that period knew one another. And they all knew the merchants who, rich with rewards from shipbuilding, ship owning, heavy industry and manufacturing (people like Burrell and the Coats family) had money to spend on paintings to decorate the lavish public rooms of their fine new, traditionally designed houses, built far from the stinking River Clyde.

One artist who did know Mackintosh and his wife Margaret Macdonald well was J D Fergusson, one of the Scottish Colourists, whose work was exhibited by Reid. Fergusson and his partner Margaret Morris knew Mackintosh in later life when bowed by his lack of success after his promising start in architecture when he had won the contest to design a new school of art for Glasgow, and then designed a house for publisher Walter Blackie near Helensburgh, Hill House as well as the Willow Tearooms for Miss Kate Cranston.

Searching through the manuscript for my unpublished book I only came across a couple of passing references and this mention of Toshie:

“Charles Rennie Mackintosh and his wife Margaret had been known to Fergusson from early on but became firm friends during the war when Fergusson returned to London where the two then had a studio. Fergusson had been a war artist during the conflict [WW1], based in Portsmouth, painting scenes of shipyards and battleships. Margaret Morris, daughter of William Morris, had met Fergusson in 1913 when in Paris with some of her dancers and became his partner for the rest of his life. Both were always on the look out for studios, Fergus, as she called him, for his painting and sculpture, and Meg, as he called her, for her dance classes and performances. At the end of the war, with property cheap, Fergusson looked at property that could be converted to artists’ studios, but his scheme was turned down by the local authority.

“Mackintosh designed a block of artists’ studios ‘of simple masses, with elegant lines’ but these too were turned down on the grounds they resembled a factory. The addition of some Greek columns or swagged decoration would have rendered them acceptable, but the architect was not for prostituting his talent, or compromising his design principles to suit any council, so the studios were never built. Toshie then turned his attention to designing a theatre for Meg Morris but without funds to pursue the idea, it was never going to become a reality, and the Mackintoshes went off to the south of France to paint.”

Mackintosh’s architectural commissions had dried up. But in France Mackintosh was to prove he had more than one string to his bow. The watercolours he painted there have become almost as famed as his buildings and are certainly much more numerous, sad to say. I had an acquaintance once whose husband, an architect, had picked up for very little a Mackintosh painting. Tall and narrow, it was propped beside the marble fireplace in their Victorian town house. I shudder to think what it might be worth today. Scotland was late to the party in lauding its artistic son.

The information on Mackintosh and Fergusson was taken from the book by Margaret Morris.* The book was given to my husband and me by a lovely lady called Sheena who ran a gallery in Ancrum in the Scottish Borders. Sheena’s husband, Hamish Lawrie, was an artist, originally a film-maker with the pioneering Scottish documentary maker John Grierson. He took up painting and Fergusson encouraged him to paint full time. Sheena and Hamish became familiar with Fergusson and Morris in France. The book is inscribed by Morris to them.

We were overjoyed to receive it as a present – a little piece of art history linking us to well-known names. Sheila wasn’t bothered about giving it away to a new home as although she had a high regard for Fergusson’s work, she and Margaret Morris hadn’t hit it off. I seem to remember she thought her too uppity.

A number of years ago when visiting the Fergusson Gallery in Perth we were looking at photographs of Fergusson and Morris taken in the south of France – a popular place for artists during the first half of the 20th century as life there was cheap and the light excellent for painting. The caption gave the names of those in the photograph, with two listed as unknown. We were able to tell the gallery staff the names of the two unknowns – Hamish and Sheena Lawrie.

As someone born and raised in Glasgow I feel the Mack’s loss and mourn it, thankful my husband and I visited the wonderful building before the fire four years ago, and can still remember much of what we saw and what our feelings were on being inside the actual building designed by CRM. The library was a never-to-be-forgotten experience with its massive pillars of dark wood like nature’s Corinthian columns, the chairs, desks, bookcases and of course the light fittings – little cubes like pieces of Lego suspended together to create a whole light-giving composition.

Then there were the studios with their enormous windows to allow painters to work in daylight, and the wrought ironwork – sinuous and curling like whippy branches with unfurling new leaves, and the clocks with their distinctive numerals. The small details were no less unforgettable – door finger-plates, little stained glass or enamel design inserts into doors, handles. The Mackintosh wasn’t just a building, it was an entire Mackintosh environment that opened a window into its creator’s mind and let us glimpse a slice of his genius.

And now it looks as if it has gone forever, and at a time when there are celebrations marking 150 years since its creator’s birth (7th June 1868). So now a double tragedy. After the angst of the fire four years ago another fire destroys not only what was left but also all the meticulous restoration work. From the embers four years ago articles or bits of articles were salvaged allowing new similar items to be pieced together. But from the look of video and photographs it is obvious nothing but walls now remain, and their structural integrity must be doubtful given the fierceness of the blaze. Time and experts will tell.

The expression of our First Minister when visiting on Saturday morning, shown round by firefighters, told the story and expressed the devastation she felt. She too found it difficult to find words to describe what she had seen, repeatedly uttering the word ‘heartbreaking’. The Scottish Government would do everything it could to help where possible, she assured, but what has gone can never be replaced.

Even if, eventually a new building, a replica, were to rise Phoenix-like from the ashes, would it be the Mackintosh or a mere pastiche? Surely the spirit of the man who conceived it would be missing. Already the cost has been estimated, perhaps very conservatively, at £100m. To put that in context, the Scottish Parliament building cost £414m; Glasgow’s Riverside Museum came in at £74m. Both were built by renowned architects. 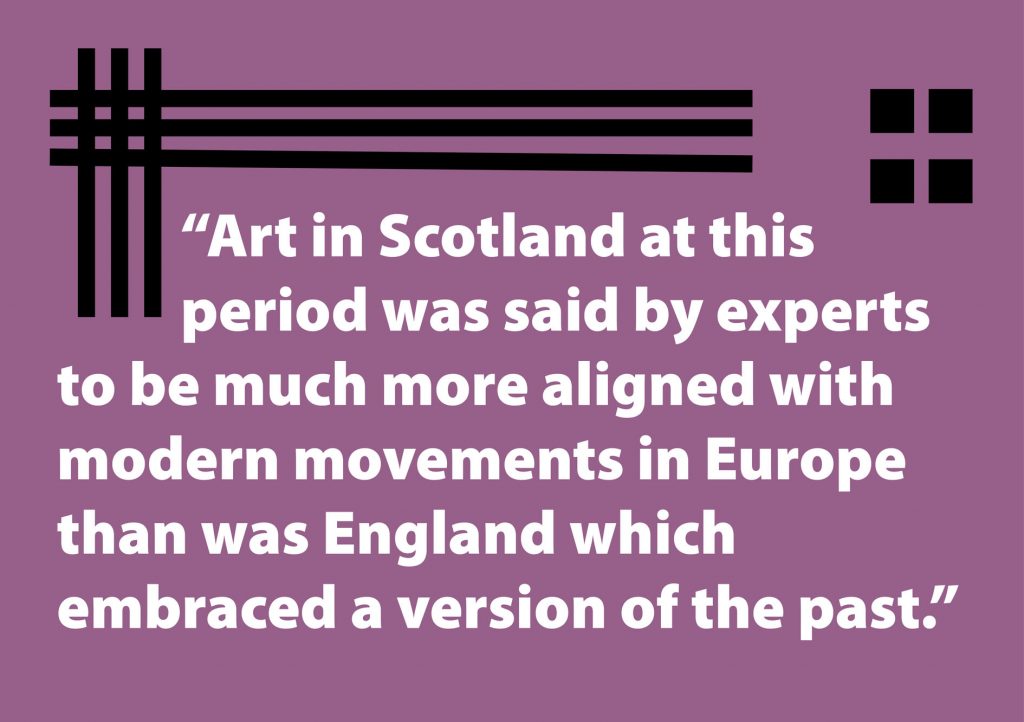 Instead of rebuilding and perhaps even having to update  the design to comply with modern building requirements, would we be better challenging a new architect to create a world-class building in memory of CRM. Not one that copies him, but one that shines with the creativity and ingenuity of a new era, one that would be a celebration of the builders, and craftspeople who worked on it. Perhaps that should be our memorial to CRM. A forward-looking building in memory of a forward-looking man. That would be a case of the king is dead, long live the king.

If you want to find out more about Mackintosh, information can be found at –

House for an Art Lover http://www.houseforanartlover.co.uk

The Hunterian, University of Glasgow https://www.gla.ac.uk/hunterian/collections/permanentdisplays/themackintoshhouse/#d.en.199546

The Hill House, The National Trust for Scotland http://www.nts.org.uk/property/the-hill-house/#