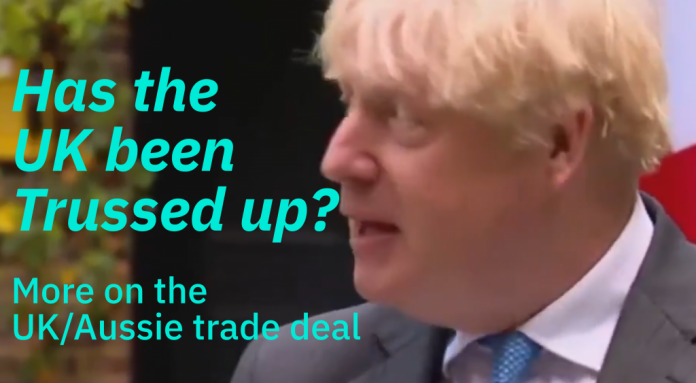 Molly Pollock takes another look at the so called Australia trade ‘deal’ now that a different interpretation has emerged from down under. As with EU deal, Johnson either didn’t understand or lied.

“Our new trade deal with Australia means:  Tariff-free trade for all UK goods It’s easier for people to travel and work in Australia lower prices & more choice for UK shoppers This is a win-win deal for our £14bn trading relationship”

Yesterday Prime Minister Boris Johnson’s announcement of the deal included a pledge that farmers would be protected for 15 years. However the Independent has today revealed that the small print of the agreement – under wraps here but made public in Australia – shows this pledge has been dropped and that tariffs on imported beef and lamb from Australia will be scrapped with immediate effect.

While the Australian deal is estimated to add 0.02% to UK GDP in 15 years time, the UK government’s own estimates on the impact of leaving the EU single market is a reduction in UK GDP of 4% over the same period. Therefore 200 Australian deal’s would be needed to offset the impact of Brexit.

“The Tories have quite literally given the farm away with the Australian trade deal. To even get close to mitigating the Brexit disaster 200 Oz deals would be needed. The Tories will spin but the reality for the rest of us is a different reality to their talk. #PMQs”

A number of people on Twitter have commented that the UK is rapidly gaining a reputation for giving those countries with whom trade deals are desperately needed everything demanded in exchange for a photo opportunity with Boris Johnson. Indeed the Sydney Morning Herald underlined this in an article Johnson needed trade deal a lot more than Morrison:

“Morrison could have happily left Downing Street on Tuesday morning without signing an in-principle agreement … That, however, would have been a disaster for Johnson.”

It goes on to say that Johnson “has been hungry for a resolution because striking the first trade deal since Britain left the EU on January 1 helps him argue that Brexit has indeed given the UK the freedom to seek its own deals on its own terms.”

According to the Sydney Morning Herald, the other compelling motivation for a deal was that it will help smooth the path towards the UK joining the Trans-Pacific Partnership, something Liz Truss is well aware of.

The UK requested membership of the TPP in February 2021.

So much for reducing the UK’s carbon footprint and claiming we’re going to build back greener. The reality is shaping up to be very different.

To preserve a semblance of democracy, Number 10 has announced that MPs will be allowed to debate the UK-Australia deal – but will not be able to vote on it.

Such is the level democracy has sunk to in the UK. 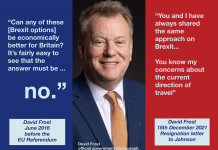 Fantastic rugby win for Scots as they beat Australia 9-6