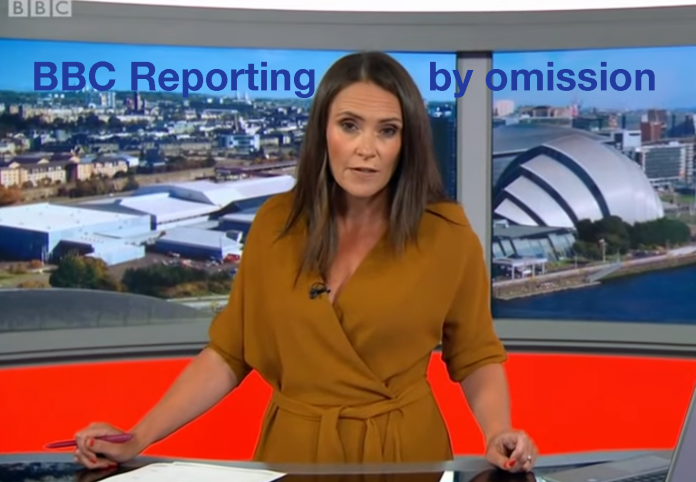 Last Tuesday at her Covid briefing the First Minister accused opposition politicians and some journalists of deliberately misinterpreting comments she made in her June 22nd update to parliament. Nicola Sturgeon was reacting to a claim that she had set and missed a vaccination target for the 40-49 age group.

The previous day BBC Scotland’s flagship evening news programme, Reporting Scotland, had highlighted opposition politicians’ claims regarding the so-called ‘target’, telling viewers it had been missed. The programme contained footage of comments made by the First Minister to the Scottish parliament on June 22nd.

The footage, rendered black & white by Reporting Scotland for dramatic effect, appeared damning. But was it as clear cut as the reporter appeared to be making out? The answer was no. BBC Scotland had cut out a key section.

Moments before announcing what she described as vaccination milestones, Nicola Sturgeon had given important caveats. She made clear that the milestones should be viewed within the context of some people missing appointments.

It was clear the so-called target was not as had been presented by Reporting Scotland. It was also clear that opposition politicians and journalists who had accused the FM of having set and missed this target, were deliberately misinterpreting what she had said.

Scottish Labour and Scottish Tory MSPs lying isn’t a great surprise in today’s Scotland. They’ve been doing it for years and getting away with it. Of more concern is the behaviour of BBC Scotland and its reporters in facilitating the lie.

Had Reporting Scotland included the caveats given by Nicola Sturgeon on June 22nd the programme would have exposed those opposition politicians as liars. But reporter Laura Goodwin chose not to. Indeed Goodwin, or whoever edited the footage, went out of their way to ensure viewers understood its importance by rendering it in black & white.

Reporting Scotland had, two days running, cut highly significant comments from footage of the First Minister speaking. The removal of the comments bolstered a narrative that presented Nicola Sturgeon as refusing to accept a target had been missed and of then launching an attack on unspecified ‘critics’.

That same evening, emboldened by BBC Scotland’s manipulation of the story, Scottish Tory MSPs launched a coordinated attack on the First Minister’s integrity on social media. Tweet after tweet presented her as having attacked, not opposition politicians and some journalists, but ordinary people.

Indeed the Scottish Tories released an attack video that was virtually identical to the footage shown by Reporting Scotland in that it edited out exactly the same comments as had been removed by the BBC Scotland reporters.

The blatant dishonesty from Scotland’s so-called public service broadcaster was breathtaking. It had lent credence to a lie in order to persuade the public that the Scottish Govt had missed vaccine targets. It then facilitated further attacks on the integrity of Scotland’s First Minister by the liars by making it appear she had taken aim at the public and not the liars.