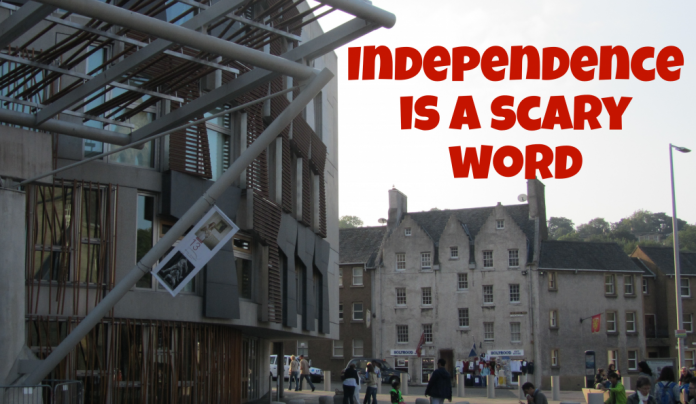 With an indyref on the horizon how do we convert those still undecided and the so-called soft Nos? One thing is certain: we can’t retread the 2014 route. Then, in a campaign that lasted around two and a half years, support was raised significantly, though not enough. But those converts were the low hanging fruit, those easiest to convince during a lengthy campaign.

Next time around the arguments used before will have lost their freshness, their ability to cut through scepticism and a lack of interest in politics in general. And this time it’s almost certain the campaign will be much shorter. So how to move minds?

The announcement of a date will not change minds, though it may hopefully focus campaigners on the amount of work that needs done to shift many entrenched minds from No to Yes. To get through to these people, the fruit higher up the tree that’s more difficult to harvest, we need new approaches, new arguments. And we need to be working in our groups and branches now.

In a recent article on his blog Richard Murphy mention people he knew who have no interest in politics and who he says, “evidence almost no knowledge of current political debate, who is who in politics, or what might be disputed.” Despite their lack of interest these people seem to vote. He goes on to say that he has become aware through reaction to his tweet threads that people do not vote for ideas but on the basis of what they think has to be done.

He also believes that when people are concerned by how something can be afforded, how it can be paid for, it is often a question of competence more than anything else. Although the article is about the left and how its ideas can be turned into practical programmes many of his points are also relevant to those of us who want independence and are trying to persuade others of the benefits that would bring, though perhaps too often relying on the negatives of the Westminster system rather than the positives independence could bring.

Murphy suggests people vote on the basis of three questions:

Surely these questions are the ones likely to be asked, directly or indirectly, by people considering how they will vote in an independence referendum?

What is on offer?

Independence, of course. But independence is an idea, and according to Murphy people don’t vote on ideas. So maybe we need to change the wording to make it more relevant to what people do want. Words matter, as does emotion. So perhaps we should use words and phrases that are emotive, that speak directly to people’s feelings, hopes, aspirations. The Brexiters used simple phrases: taking back control, controlling our borders, making Britain Great again (Trump in the US too), global Britain, worldbeating. All of these ring bells with voters, paint mind pictures of the kind of country they want to live in, are comfortable living in.

Words matter. Just listen and read the carefully selected words the media uses in items to denigrate and undermine the competence of the Scottish Government. and the First Minister.

Is independence a scary word that makes voters uncomfortable, threatens their relatively comfortable and secure present? Do we need to ditch or at least downplay the word ‘independence’ in favour of self determination, self government, standing on our own feet, a world-connected Scotland? Would these or other similar phrases carry more of a message especially to those less interested in politics?

How closely does what is on offer chime with their own hopes and aspirations?

This suggests people vote for whatever party says it will provide what they want – better pensions, childcare, an NHS free at the point of use, an inclusive society, the mirage of still being a global power, a belief in the union’s broad shoulders. Vote Leave’s £350m pledge to the NHS on its red bus moved many votes, as people wanted to see better health funding, but of course the promise was never delivered. Nor did it probably play to the same extent in Scotland where people voted more for the perceived benefits of the EU and where NHS underfunding was less of an issue. So there is a need to talk to voters to determine what they want, what things are uppermost in their minds.

To convert voters do we need to break down independence into a series of promises which will be delivered? Difficult as we don’t know exactly what our economic position will be come independence and what areas will need to be prioritised, though making promises and not delivering isn’t exactly new in politics. But not the best start for a new country that wants to take as many Scots as possible along with it. That said, it would seem highly unlikely that the initial government of an independent Scotland would, for example, want to privatise the NHS. But perhaps rather than be specific we need to take a broader brush approach – inclusiveness (everyone matters), human rights (your right to have the best life possible), the right for your voice to be heard and your vote to count, to have governments you voted for and whose policies you contributed to.

Competence and confidence in a government are two things which can be difficult to judge. Look at polls to see how many, particularly in England, believe Boris Johnson has dealt competently with the Covid19 pandemic where 150,000 lives have been lost, and how his government is still, almost unbelievably, regarded with confidence to steer the UK onwards to greater things.

Meanwhile in Scotland voters have trusted the SNP and for the past fourteen years voted the party into government. The delivery of independence has undoubtedly been at the heart of this for most, but had the SNP not proved itself competent in government then unionists parties may have been much closer to taking power.

Authors are well acquainted with the phrase ‘show don’t tell’. In other words, to make your book more exciting, to keep readers engrossed and feeling involved with the action, a writer shouldn’t tell what is happening eg the sight made him angry, but should show the character was angry by his clenched fist, his gritted teeth, the kick of his foot on the wastepaper bin. First Minister Nicola Sturgeon has used this phrase, and her government in its approach is attempting to show voters how caring, inclusive, sensitive, inspirational an independent Scotland could be compared to rule by Westminster.

So instead of kicking our heels and moaning about a lack of action, we need to discuss how we can go about persuading the undecided, bearing Richard Murphy’s three points in mind.