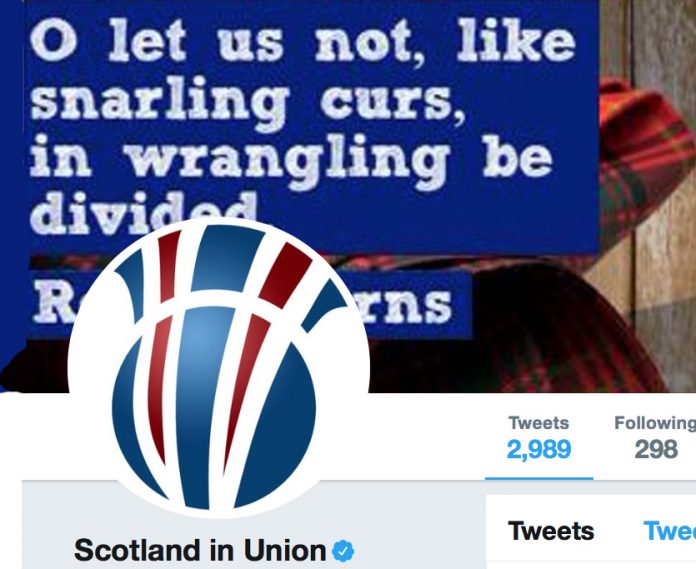 As the dying embers of 2017 smouldered gracefully to a quiet end the flames were fanned to life with revelations leaked to Stu Campbell of Wings and Bella Caledonian. The Elite were behind a campaigning organisation called Scotland in Union whose purpose is to keep Scotland in the union and permanently tied to the wishes of the high and mighty, influential and wealthy.

This all unionist party campaign was formed and brought to life by those whose natural political position was to the right and dominated by Conservative unionist values. A sprinkling of LibDems and Labour figures would be useful as a fig leaf for an agenda entirely financed by the Elite.

That the party of Keir Hardy should be comfortable providing leadership, at least in name, surprises nobody but what little has emerged in published form confirms Scotland in Union is dedicated to the vested interests of the few, not the many. Lib Dems tacking along is a bit less of a surprise.

Graeme Pearson, a former Labour list MSP for the South of Scotland and a retired police officer, was appointed as Chief Executive of Scotland in Union at £50,000 a year for one and a half days a week, according to the Sunday Herald.

Pearson had let his membership of the Labour party lapse in January 2017 explaining he could not support Corbyn as leader. On 23rd January 2017 Scotland in Union issued a press release announcing Pearson’s appointment as Chief Executive. Connected, coincidence?

Pearson said: “Like most people, I hoped the decisive result in the 2014 referendum on Scottish independence would be the end of the division and uncertainty created by our constitutional debate. Regrettably, the nationalists have refused to take no for an answer, and are now using the Brexit decision as a new grievance, despite the fact Scotland clearly doesn’t want another referendum.”

When things change, political objectives change as the SNP made clear. Pearson is of the ilk that no matter the disadvantage or the overriding of Scottish opinion on EU membership, the continuation of an increasingly uncomfortable union comes above all else. The strong evidence that many do want another referendum is clear, yet the Tories and SiU managed to swing unionist opinion behind Scottish Tory candidates in Theresa May’s otherwise disastrous June election.

For seven months Pearson worked on day-to-day campaign planning for Scotland in Union. By August, former Labour MP for Airdrie and Shotts, Pamela Nash, replaced Pearson as the new Chief Executive. Pearson has remained on the SiU board. Nash said on her appointment – well nothing different from Pearson.

In a democracy it is perfectly legitimate for individuals to come together on an issue they agree on. The surprise is Labour politicians are so willing to place themselves under a Tory masterminded campaign. Perhaps the feeling of being disadvantaged electorally by working alongside Tories in the Tory funded Better Together campaign has dissipated. The claim they like using Tory money does not wash. Accepting a favour from the Mafia does not ensure you are distanced from the breadth of their intention.

“And in kirk-yards renew their leagues,

Organisations, understandably, do not want their financial information leaked

Yet it does happen and the public is keen to hear the gory details. Some donors to SiU are upset, others do not care who knows. By contacting the named individuals, Stu Campbell got the second confirmation source lawyers thought advisable, thus ensuring high journalism standards.

A communication to Wings from a practice of high profile specialist media lawyers  acted as a third confirmation that genuine and inconvenient information had been ‘leaked’.

As an incorporated body, a company limited by guarantee, SiU need to submit accounts. The details they have to provide give very little information as their size makes them exempt from lodging full accounts under section 477 of the Companies Act 2006. Their financial year ends on 30 November. At 30th November 2015 they reported retained funds of £91,362. A year later the value of accumulated funds held had risen to £313,283. There are no accounts filed for the year ending 30th November 2017. They have until August this year to file these.

There is an argument that lobbying groups and organisations set up to promote political ideas should not be exempted under section 477 of the 2006 Companies Act on account of small turnover. There is also an argument that anybody donating below the notifiable limit should have to attest there are no other political donations that would take them over the limit. Donations to different bodies with the same, or similar objectives, should be aggregated for the purposes of transparency to place all parties on the same footing.

With wealthy benefactors, beyond that of other parties, the Tories have the capacity to set up as many campaigning groups as suit their needs in influencing the media and electorate.

The May government is at sixes and sevens. The EU referendum campaign and Brexit vote ruptured any sense this is a party at ease with itself or in accordance on the major issues of the day. The longevity of such administrations is constantly in doubt.

Against the odds May has survived, to perhaps see another Christmas in Downing Street. The one thing Tories are united on is another general election should be avoided. A leadership change, no matter how adroitly handled, could bring another election in its wake. Tories cling to power at all costs because they are going to make a success mess of Brexit.

The Scotland in Union fiasco is the first real evidence all is not well in Tory Scotlandshire. Although Scotland is overwhelmingly in favour of staying in the EU, a hard core of Scottish Tory leavers seems to have waltzed off to UK Unity, upset at how SiU inefficiently was run.

This dissention paints Ruth Davidson’s Tory cabal in the same fractious and disunited state as their southern fellow travellers. For landowners, wealthy unionists and crowds of Anglo Scottish aristocrats it must be tough watching their loose change being paid to former Labour elected members to front Scotland in Union.

Don’t be surprised if SiU suddenly gets shut down for the embarrassment heaped upon those in high places.

Information is power but you have to keep it safe or the manicured lawn becomes infested with molehills only suitable for a crop of leaks.

Where would we be as journalists without the Wiki leaks, the Paradise Papers, Ministers with open notebooks as they walk into No 10 and Scotland in Union? The public would never learn where power and influence really lie.

Scotland still in EU after independence