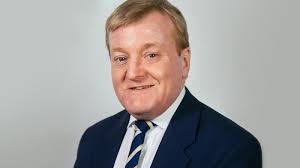 Tragic as such an early death is, it would be wrong to remember Charlie Kennedy’s as a sad story.

Touched with human frailty for sure, but his life is really a metaphor for a changing Britain emerging from two-party domination by public schoolboys on the one hand and union-controlled placemen on the other. He arrived flushed with improbable youth, a cheeky smile and a beguiling line in self-deprecation while armed with a wordsmith’s gift for common sense analysis.

His tone in debate, fashioned in the hothouse of Glasgow University, allowed him to play the ordinary man among the dissemblers, cutting through the bluster with Highland logic. To an audience leery of slippery politicians, his accent combined with an amused aspect, allowed him to reach out beyond the Westminster bubble and make him highly believable.

He had a gift that for the public figure is gold dust – he was likeable. He came across as easy-going, dealing with complex subjects with casual ease and frequently squeezing a smile from the listener.

He went to Westminster as a flag-bearer for a new political entity, the SDP, which was to get within grasping reach of breakthrough and which would light the path eventually followed by New Labour. There was excitement in the air at the possibilities presented by smashing the two-party duopoly and Kennedy’s air of anti-establishment precocity encapsulated the times.

He was part of a radical tradition in Highland politics and, for many in the vast constituency, he was their boy. In the years before the Edinburgh Parliament he shone as a successful Scot on the Westminster stage, extending his wit and lust for life to the TV studio.

His success in leading the new combined party to its largest haul of seats in 2005 didn’t please those unconvinced by his leadership abilities and the rumblings of discontent would never go away thereafter. To some of us, the high point had been his passionate and rational opposition to the cheer-led war in Iraq in which he was conclusively proved right.

In a constituency with a guaranteed Labour winner, I broke with habit and voted Lib Dem as a way of thanking him for his stand. His may look a logical decision now in the light of experience but at the time with the weight of establishment opinion and Washington against him, it took courage to gamble on a radical position.

Good politicians don’t necessarily make good leaders. The history of politics is lined with the names of those convinced leadership was their destiny only to find it was their dustbin. A drink issue can be managed from relative obscurity but it can’t escape the scrutiny of leadership and, as he struggled with the demons, he lost sight of his duty and tried to carry on, leading to the inevitable denouement.

The cost to him of alcohol was costly on both public and private life and a lack of visibility on the ground was noted in the run-up to the May election. He was swept into parliament by the SDP surge and swept out again by the SNP’s.

His death comes as Britain enters a period when the potential for his objective of federalism has never been greater – the case has been made by events more than by the parties. He would have played a statesman’s role.

Like many, I will smile when I remember him – pint in hand and a twinkle in his eye.

There are Tories around these southern parts, so I am ‘both votes SNP’