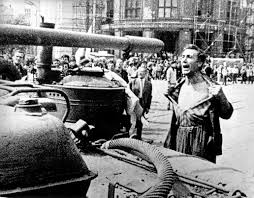 I once knew two men called Honza, both in their 60s-70s and living in Prague. They were, in their own ways, raconteurs and both, I learned, had been educators in Czechoslovlakia,  one a historian and the other a mathematician.

Honza, the mathematician, proudly told me that he had achieved the highest grading it was possible to get as a maths teacher in Czechoslovakia and that he spoke excellent Russian. He wasn’t a Communist, though he saw some failings in the post-Velvet-Revolution state, one too tragic to recount here.

He revealed to me that Honza, the historian, had been a member of the Communist Party, “but I was in a different situation, so I understand – I never judged him”.

The mathematician explained that he too thought it would be necessary to join the party, but his father had counselled him: “Other people have to join the party because they need to work, but you don’t. You’re a mathematician and they don’t have enough of them in this country. So, they can never stop you working.”

Historians, on the other hand, were 10-a-penny, as in most countries. The historian did have to join the party and he published 14 history books – each vetted and approved by the party.

Martin was my Czech language teacher. He once casually explained that, even into the 1980s, people wrote CVs explaining that their parents fully understood the reasons for the Warsaw Pact countries (minus Romania) invading Czechoslovakia in 1968, after the Prague Spring. It sounded absurd.

Later, I met Jiří (pronounced Yihrzhee – the Czech equivalent of George), who had a different story. His parents had refused to sign the party declaration stating that they understood the necessity for the 1968 invasion.

He was taken out of his “grammar school” (being the nearest equivalent English term) and transferred to a technical school, where he would learn things like rudimentary mechanics, explicitly robbing him of the skills and education needed for progress to university and the subsequent career options.

1989 was good for Jiří. He eventually got a decent job in IT support.

Michal was an aspiring artist. He was asked to join the party but refused, on principle. He was then told that he would not be allowed to go to university. Instead, he was immediately referred for military national service. He feigned mental illness in order to be rejected.

Marketa was from a Moravian Catholic family. Her father refused to join the party and her parents insisted on going to church. For these crimes, she said, she was ostracised by her schoolmates, decried as a dangerous outsider, with few children willing to be her friend and fewer still prepared to be seen with her in public.

Robert’s father was a Slovakian party member, a Catholic but not fully-practising, while his wife was more devout. Robert respected his father and largely sympathised with his political views but he also wanted to practise his faith.

The problem was that people attending church were watched and reported on. Much like every apartment block had its designated person to record and report on transgressions by tenants. Transgressions such as, failing to fly both the Czech and Soviet flags (from the state-provided flag-holders) on national holidays like International Workers’ Day.

These are just a few anecdotes of a bygone era in a specific place where dissent was not tolerated, where the media presented protest or social unrest as being the result of subversive elements corrupting naïve citizens. But all these anecdotes are small, personal stories of life under the Communist one-party state.

There were many more grotesque issues. But none were more shameful than the story of Milada Horáková. Her political record could read like that rarest of things – a truly principled politician, speaking up for her beliefs. And yet “evidence” was “uncovered” that she was a reactionary – with Nazi sympathies, ready to undermine the socialist state.

In a show trial, she refused to confess to these “crimes”, of which she was absolutely innocent.

For this, the judge sentenced her to death by hanging but with a final instruction: “And don’t break her neck – strangle the bitch!”

The executioners duly followed their instructions. The judge was later prosecuted and pardoned – showing no remorse, but noting that “we were creating a state in which nobody would be out of work”.

What is the purpose of recounting all this?

Well, living in the Czech Republic, I read political entreaties to voters to resist Scotland becoming a one-party state. And, in the wake of the great Labour “anti-semitism” hysteria, it seems somehow relevant to point out what a one-party state really looks and feels like.

It is one in which the government is also a ruling party, supported by a state-run media supporting that party, a political police force and judiciary. It is one in which it is not necessary to rebel or dissent, but only to differ or fail to assent in order to be designated as a subversive – an “enemy of the state”.

Does this in any way reflect Scotland in the 21st century – with its parliament fully subordinate to the British state, in the sense that those powers not already reserved to Westminster can be revoked without reference to the Scottish people? Does anyone believe that the media machine that bombards Scotland with its output is propagandising in favour of an SNP soviet?

Scotland currently has that rarest of phenomena, a government that enjoys huge popular support, estimated to be 50 per cent or more. And this in a system that allows a plurality of political groupings, apparently without fear of judicial or domestic reprisals – while the political hegemony in the UK as a whole is entrenched in its opposition to even cooperating with the party that is enjoying popular support in Scotland.

An argument against voting SNP in this election – one posited by both pro and anti independence parties – has been that it would be wrong to allow Scotland to become a one-party state.

Indeed it would. Democracy is hard-won and easily-lost.

But, whoever you choose to vote for, it would be wise to consider what a one-party state really is and not to disrespect those who have experienced it.

By all means, when the state is depriving your children of education or job opportunities for political reasons, stand up and fight. When people are facing imprisonment, never mind execution, for standing up for the principles of democracy, support them.

But also remember to respect the experience of those who have lived, suffered and survived under a one-party state. For those who have endured something that no one in Western Europe has experienced since the 1940s, the term is not just an electoral barb or hashtag.

To misuse the term is to warp and channel the misery and injustice of millions of 20th-century Europeans into a convenient sound-byte for political expediency.

Remember that you can vote for who you please and that you are unlikely to face discrimination should you vote SNP, Green, Labour, LibDem, RISE, Tory or UKIP.

Does that really look like a one-party state? Or are some people trying to con you out of popular government?

Your democratic rights are precious. Enjoy them.

Offensive Behaviour: the case for the SNP repealing their own act