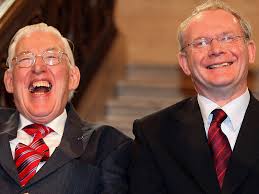 The death of former Northern Ireland Deputy First Minister Martin McGuinness sparked conflicting responses from political observers and the media, mainly because of his previous life as a senior figure in the Provisional IRA, and his avowed Republicanism. Carolyn McCole reflects on the conflicting appraisals of his contribution to modern Irish politics.

Martin McGuinness is dead. He died of a rare heart condition, but rather than focusing on the uniqueness of his death, the media and various commentators delved into the exceptionalism of his life.

Most reports and tributes appeared to follow the rhetoric of a violent man who, finally, embraced peace. The latter acknowledgement seems to be made grudgingly in tone and is often accompanied by the suggestion that he did so for his own personal benefit. Many people believed that he should be granted no acknowledgements at all.

What’s most conspicuous by its absence were the stories that both the metropolitan media and national collective memory have declined to explore.

If someone is fighting, then they must surely be fighting against someone or something? No-one is violent in a vacuum. There are two sides to every story and throughout the coverage, it seems that only one has been told.

The troubles in Northern Ireland were horrendous and should never be condoned, but it must be remembered that there were two sides involved, both arguably equally bad. Both murdered. Both terrorised. Both thought they were right. When only one side is remembered, the misunderstandings and hatred perpetuate.

It appears that the mainstream media recognised Martin McGuinness as a Man of Terror in life and remains determined to remember him as such in death. But would that be fair and does anyone gain from this obituary? Are we so naive as to believe there was one good side and one bad?

It has often been said since his death, that McGuinness never apologised. But who has asked whether he forgave? How can any reasonably-minded person hohld one man responsible for what was effectively a civil war? And who has reported on what he was fighting against?

Ultimately we have to understand an  opponent’s perspective in order to achieve a meeting of minds; and without a meeting of minds, there can be no forgiveness, repentance, peace or progression. Perhaps there is something in that we can apply to today’s terror threats. If only we could all be as successful in securing peace, as this man who was so bitterly despised.

In the various commentaries and reports over the week of his death, McGuinness was described as a man who changed. But did he? At the age of 22, not long after Bloody Sunday, he told political reporter Peter Taylor that he would rather be mowing the lawn; and throughout his later years he continued to stress the utmost importance of peace. A change of tactics perhaps, but surely consistency in the desires of the man.

Regardless of your view of his aims, tribute must surely be paid to the remarkable power of his qualities as a leader. For him to convince his followers, many brutally violent, to forget decades of trouble, revenge and what they rightly or wrongly believed to be political injustice; to enter into a power-sharing agreement on Good Friday with the enemy; was indeed a remarkable feat, surely worthy of the world’s greatest accolades for peace. When Peter Taylor questioned rank and file IRA members on this radically different change of tact, they answered simply that if it was good enough for Martin, it was good enough for them. Such was their trust in and respect for the man as a leader.

His personal bravery should not be dismissed or underestimated. He was well aware that entering into the power-sharing agreement put his life at immediate and lasting risk from a multitude of people who were more than capable of taking it in a brutal manner; yet it was a risk he was willing to take and a sacrifice he would have been willing to make “one million percent” for peace in his homeland. What greater offering could he have made? How many of us would have been brave enough to do the same?

Martin McGuinness was many things to many people. For every person who claims he was a terrorist, there will be another remembering him as a freedom fighter. He was at some points a man of extreme violence and at others a man of extreme peace; but crucially on both occasions, reacting to what he and many others recognised as his mirror image. Until both realities are reflected in our collective memory, then the whole truth will never be revealed and therefore nothing learned.

The Blame Game / Confusion Theory and our own culpability