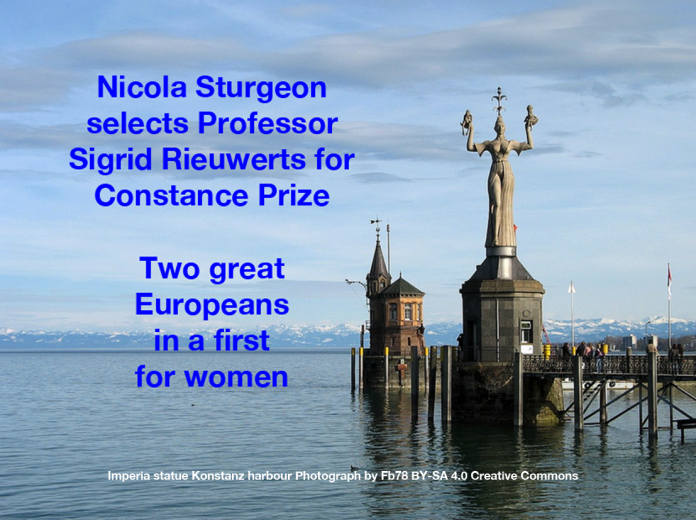 The Constance Council Prize for European Encounters and Dialogue will be awarded in 2021 to Professor Dr Sigrid Rieuwerts from the Johannes Gutenberg University Mainz at the suggestion of this year’s patron, First Minister Nicola Sturgeon.

When we covered the original story of Nicola Sturgeon’s appointment as this year’s patron back in October we had no idea who the First Minster would put forward but correctly predicted that the award would for the first time go to a woman.

“The Constance Council’s board of trustees selected Nicola Sturgeon as this year’s patron due to her work as “a convinced European” and “champion of European values. There are two things that are remarkable about Sturgeon’s choice as presenter. She is the first serving politician to be awarded the role of presenter and the first outside the Germanic speaking nations and regions of mainland Europe. She is also the first woman to become Patron. If we were to hazard a guess on who will receive the award from the First Minister we will go no further than to suggest it will be a woman for the first time.”

Due to the pandemic the actual award ceremony, which was due to take place today, has been has been postponed until into 2022.

In her statement on her choice of Dr Rieuwerts the First Minister said, “So many individuals and organisations are doing excellent work to promote European engagement and unity, which made choosing a winner immensely challenging. Dr Rieuwerts’ work to promote student exchange, particularly through the excellent GET-SET-GO scheme, has made a significant difference to the lives of young people in Scotland and Germany.

“Freedom and human dignity are both core values of the European Union, which the Scottish Government shares intrinsically. They are inherent in Dr Rieuwerts’ efforts to promote cross-border culture through the Scotland Hub in Mainz and to help German and Scottish students engage with refugees and embrace the opportunities and challenges Europe has to offer.”

The 2021 recipient of the “Constance Council Prize” has been a lecturer in the English Department at the Johannes Gutenberg University Mainz (JGU) since 1997 and her focus in teaching and research is primarily on Scottish history, culture and literature. Dr Rieuwerts’ research has received several awards in Scotland, including a Fellowship of the Royal Society in Edinburgh. She was appointed “Commissioner for Scotland” by Johannes Gutenberg University Mainz in 2020. She founded the “Scotland Hub” at JGU, a platform to promote German-Scottish relations and the understanding and appreciation of Scotland’s history, culture and languages in Germany.

Among other things, Dr Rieuwerts has taken on the supervision and management of a translation project with Scottish artists and writers (invited by the Cultural Foundation of Rhineland-Palatinate), and launched the cultural webinar series “Reading Scotland”, which facilitates a dialogue between researchers, creative artists and an interested public in Scotland and Germany.

Dr Rieuwerts was also instrumental in the signing of the partnership agreement on education, science and culture between Scotland and Rhineland-Palatinate in March 2021. As early as 2012, she initiated the GET-SET-GO programme in cooperation with the German Consulate General in Edinburgh. This places around 25 student teachers as German language assistants in Scottish schools each year and invites Scottish students to Rhineland-Palatinate to participate in school placements or projects promoting diversity, tolerance and inclusion.

In addition, Dr Rieuwerts and her team organise numerous intercultural projects such as “Global Outreach – Global Citizen” (GO-) programmes for Scottish and German students dealing with socio-political issues such as migration or climate change.

The Lord Mayor Uli Burchardt of the City of Constance said, “I am also very pleased on behalf of the City of Constance that we have been able to win Dr Sigrid Rieuwerts and First Minister Nicola Sturgeon as two outstanding personalities and committed advocates of European values for the Council Prize. It is a great honour for me to welcome both of them to Constance next year and to be able to honour their commitment”.

Johannes Gutenberg University Mainz describes the extensive collaboration between Scotland and Germany on the JGU website – “The lynchpin of Rhineland-Palatinate–Scotland relations is the Scotland Hub at Johannes Gutenberg University Mainz (JGU). As early as 1981, a Scotland focus was established at Mainz University; today, JGU maintains official partnerships with seven Scottish universities. Further cooperation is planned, especially in the field of teacher training. In research, the relationships extend across a wide range of disciplines and are particularly active in the humanities, law and physics.”

A history of Scottish languages – part 7