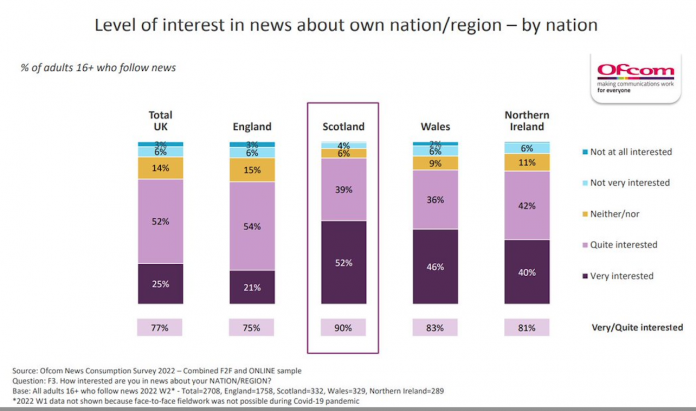 The differences between the levels of interest about news concerning each of the four nations is marked with the 3 devolved nations showing significantly higher scores for Quite interested plus Very interested. The combined score for England is 75% compared to 90% for Scotland, 83% for Wales and 81% for Northern Ireland. 54% in England are just Quite interested and only 21% very interested.

The Very interested scores are what is really telling with Scotland leading the devolved nations on 52% compared to just 21% in England. Given the current state of politics south of the border which will affect all 4 nations with the election of a hard Thatcherite Prime Minister, regardless of which candidate wins, people in England should be paying a lot more attention to what is in store for all of us in these islands.

At 52% Very interested, Scotland scores 148% higher in this category than England on 21%.

In England Not at all interested, Not very interested and Neither Nor categories account for 24% of the population. Virtually a quarter of England’s population are showing a distinct lack of interest in the range of major issues all countries are now facing from energy prices, inflation, the war in Ukraine, increasing levels of poverty, the implications of the Tories hard Brexit and their continued determination to pick stupid fights with the EU. The devolved nations can mitigate some of these issues to a limited extent but their most powerful, if ignored, position is to highlight concerns and argue for change against the ever rightward march of politics and economic policy at Westminster.

That Westminster thinks it can overrule the devolved nations demands and interests because we are vastly outnumbered in population and elected members to the crumbling mother of Parliaments is the height of arrogance. An arrogance we are unlikely to see any change in under the UK’s new PM which is more than likely to increase support for independence and belief that a population of 5.3 million can do much better by undertaking our journey to statehood in a pan European partnership of shared interests.

The Ofcom News Consumption in the UK survey also has some interesting data (21 July 2022). The reliance on television for getting news especially with older groups is well known. Television is a main source of regional/national news in the devolved nations. In Wales most people get their news from BBC 1 but in Scotland most people get their news from STV. In Northern Ireland UTV is the favoured station.

The dominance of television as a trusted news source against other media is a challenge for the independence movement. The number of age 16 to 24 in the sample is greater than both 65-74 and 75+ age groups but not when they are added together. This underlines the importance of making sure younger age groups get out and vote. Things get more interesting if we sum the samples for the lower 3 age groups (16-44) that produces a total of 1347. Summing the 3 oldest age groups (55 to 75+) provides a sample total of 981. That indicates the 3 younger age grouping is 37.3% larger than the 3 older age grouping. It should be noted the age samples are UK wide and Scotland has an older population, none the less there is some cheer in these differences.

The importance of messaging going forward is to make sure we have strong arguments to appeal to all age groups. With a new Thatcherite UK government, probably led by Truss, opportunity knocks if we all get behind Nicola Sturgeon with a coherent and energetic campaign countering the tired negativity of the 3 party unionist coalition.

That needs to come together now.

Please support Newsnet if you are able to with a donation. Donations help keep us online and publish writers (unpaid) articles like this.