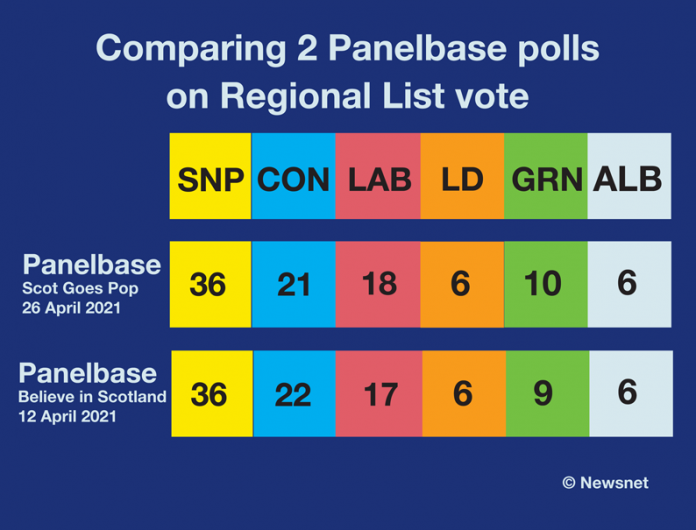 Maybe we should just talk about ‘abrdn’ or if competely disemvoweled ‘brdn’. Weird that the reorientated Standard Life Aberdeen into becoming an asset management company can’t find a new brand name to reflect whatever it is in the process of becoming. But they have given the media and Twitter much fun as a distraction from the big issues facing both Scotland and ‘poor’ (can’t live on his miserable salary and perks) Boris Johnson who seems to have a ‘death wish’ for his priemiership.

Much joy over at Scot Goes Pop on their lastest poll. If the result on 7/8 May bears out their finding then Alba could get some seats but we are far from convinced the arithmetic would produce the proclaimed 8 seats with such a strong showing for the Greens. But then, as has no doubt been noticed, Newsnet is not very enthusiastic about Alba or its reputationally damaged leader. If this poll comes near the mark it might mean 2 maybe 3 seats.

As Alba only appears on the Regional list vote that is the data in the diagram. The difference between the two polls conducted 14 days apart is small so on the same basis there is no significant change. The Conservatives being 1 down and Labour 1 up is probably not significant and just noise, although there are modest indications from elsewhere Sarwar may be closing the gap a bit. The Greens are also up 1 which if nothing else confirms they are improving on their 2016 performance, something other polls have indicated.

At Newsnet we take the run or the latest 4 polls for our calculations of the probability of where each party stands on the constituency vote and the regional list vote. Including Alba on 6% this time on the regional list the average is still 3% which would not deliver any seats realistically. Tomorrow brings an Ashcroft poll so a bit more diversity added to the mix as he has not done a Scottish poll for some time.