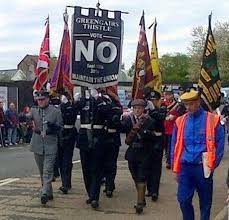 Sometime in the nineties I was asked by Sky News to spend the day in Larkhall filming. It was July 12th.

I knew about the Orange Order and I’d seen plenty of flute bands. What I hadn’t experienced was total immersion in the time warp of brocaded uniforms, competing bass drums, toddlers in Union Jack dresses and Buckfast-bevvied teenagers. I wandered the streets (red, white and blue kerbs) with slack-jawed wonder, smiling nervously as faces loomed at me with gutteral greeting.

Lurid banners announced bands from Antrim and Belfast, there was wild, unselfconscious cheering yet the police were wary and tense, turning a diplomatic Nelson to any number of minor infractions. I had only twice before felt such a complete outsider alone in an alien context – once when I was the only non-Chinese amid hundreds at the Festival of the Monkey God in Kowloon and when I was the only white at a black Baptist church in Georgia celebrating its reconstruction after a Ku Klux Klan burning. Both times I was made to feel at home. In Larkhall I allowed myself to feel distinctly uncomfortable and at times threatened.

Every cliché hove into view – plastic bags bulging with bottles, men peeing against buildings, youths silently spitting at the policemens’ backs. It appeared uncontrolled, a delirious saturnalia befitting Alloway’s auld kirkyard. The choreographed section was a line-up of kirk ministers and politicians from Ulster on a makeshift stage on the back of a flatbed lorry. They made pious statements to a thin scattering of men (some swaying) while the raucous carnival continued nearby. When one Dog-collar asked What shall we do with these ecumenicals? a voice called out: Shoot them. When a hymn was rendered meekly, two of the congregation applauded after the amen.

It was clear that drunkenness was descending into muscle dysfunction as rubber figures in sashes rolled by. I was attempting to be the impartial observer open to influence, judging rationally and ready to speak as I found. Had I been asked for a report, I fear what I would have said. I left after eight hours, relieved to be in the car heading east, chastened by the knowledge that this is my country. These are my people, the Scots.

And that’s why I think Orangefest must go ahead.

Pretending there isn’t a powerful and embedded Protestant tradition in Scotland is delusion. Saying the Orange Order has no place is dictatorial – it exists, it is supported – therefore, like it or not, it is part of our country.

The judgements I reached, shared by many, of a tribal, triumphalist, backward-looking and intolerant clan could be used to describe some football fans or, even, when I think back to the eighties, of some mining communities where social conformity was expected and imposed through the NUM. Tight-knit, virtually closed communities, whatever else they have in terms of solidarity and self-help, also tend to intolerance and unyielding discipline. If it’s true that many thousands have deserted the Labour Party as an ideological home, then in a Britain in inequality and powerlessness, why shouldn’t some cling to a traditional certainty that pulls them together and allows them a show of defiance? 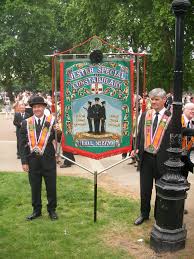 I have also been in the home of an Orange Order official and, away from feral teenagers and drunks, had a calm discussion about history and religion. As we judge football via hooligans, so we judge Orangism via thugs and drunks. Can we write off the entire movement based on its extremes?

I was struck too by the similarity of language between Orange Torch magazine and commentary in the Daily Mail. We are a ‘nation of psychiatric basket cases’ for voting SNP. The electorate is ‘barking mad’ for being won over by the ‘lying propaganda and fruitcake delusions’ of the SNP. Not so far from the Unionist media’s outpourings, is it?  If we praise the Daily Mail and other divisive outlets and treat their rants as civilised, in what way is the Order worse? And weren’t they on the same side in the indyref? The Orange Order is a more powerful supporter of Britain’s mighty Union than the Tory Party.

The answer of course is that we don’t like their ‘type’ – the socially primitive who are quick to aggression and don’t shop at John Lewis. But they are a creation of their upbringing, their environment and the Scotland they belong to. If we don’t like it – and I don’t – we still have to lump it. I don’t like a government that builds child poverty into its welfare system but I have to lump it.

On Newsnet we interviewed a woman from an Orange family who was voting Yes and her words were a reminder that our country is in a constant flux and there is nothing that we can’t change with argument and debate. We’ve already changed the political map and in a generation maybe orange will turn yellow too. I’m not holding my breath and I will be avoiding the city centre on Saturday. But every Billy Boy with a fife and a Lambeg drum has as much right to be there as me.

What stories do Scots tell about our history, and our very...

The forgotten fact that is England’s built-in Westminster majority

These are dangerous times in a campaign heading the wrong way