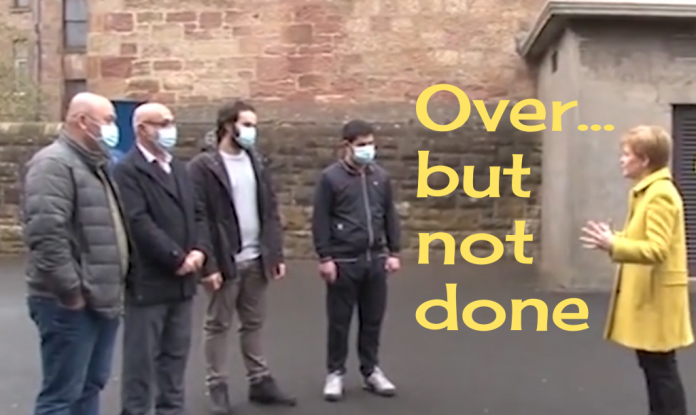 The First Minister talking to Syrian refugees at a polling station in her constituency.

The voting is over, as now are the two nailbiting days of waiting impatiently for results. Will this seat be lost, that seat won? Ecstatic cheers when a seat came our way, but a recognition too that our gain was another’s loss – a loss of employment for the former MSP and also the staff employed. But such are the swings and roundabouts of democracy.

The polling stations have been denuded of their signs, hand santiisers, disposable pencils, booths and information posters. Voters went back to their normal lives – or as normal as our lives are in this Covid 19 age. In counting places tables and screens have been packed away along with ballot boxes, trays for votes and all the necessary paraphenalia for this pandemic time. The successful have gone, as have the defeated, the election agents, counting agents and counters, plus returning officers and perhaps a handful of police officers. All that is left is the fading echo of cheers, shouts and groans mixed with the occasional tear.

The media circus has packed up its tent, its cameras, laptops and its microphones to hurry off to the next big story whilst dashing off some pieces on the results and a bit of analysis for the Sunday papers and political programmes. It’s all over but certainly not done. The discussions about a referendum will continue with the Scottish Government determined to bring forward a bill to bring it about. The UK government has been challenged to take them to court, defying Scottish democracy.

However it now looks as if love-bombing may be the UK government’s preferred route. Bombard us with shiny beads and colourful trinkets in the hope of staving off an independence win in the referendum it knows it will have to grant after much loud huffing and puffing. Some new infrastructure projects may be welcome (though they will probably be strategilcally placed in Tory seats and go ahead without Holyrood’s permission or input), but the independence question will remain, hopefully undiluted by bribes.

By now sleep is what most candidates, and their activists, want most, but the ever hungry media wants to continue gnawing at the electoral bone. Did the SNP have a majority or didn’t it? Did the one seat short of an overall majority mean an end to indryref2 hopes? Will there be an SNP/Green coalition, a formal confidence and supply arrangement, or an informal understanding that the Greens or another party might be persuaded to support the government in passing certain votes?

Nicola Sturgeon has always favoured persuasion in politics, one of the reasons why, like her predecessor Alex Salmond, she loves campaigning, the opportunity to talk to people in the street, have the chance to make people rethink. Changing minds by persuasion is her preferred way of working, a method the European Union also embraces. So a coalition or formal agreement may not feature high on her to-do list.

It is said the FM will be back at her desk in St Andrew’s House on Monday, no doubt having a well-earned rest today after media appearances. But she may find losing herself in a book today difficult as surely another challenge will be churning around in her mind – which MSPs would be suited to which posts in her Cabinet. With so many big names having retired or left there will be numerous positions to fill with new faces. Indeed she is likely to take the opportunity to opt for a total makeover.

Given the criticism of education by the Tories, will she leave that with trusty and reliable John Swinney, or will she move him and put the hot potato into a new pair of hands? Perhaps those of Richard Lochhead, another experienced minister who held the brief for Further Education, Higher Education and Science.

The health portfolio will need a new minister after the retirement of Jeanne Freeman who was such a capable pair of hands during the tribulations of the last fifteen months. Former health minister Shona Robison has experience but given that she was forced out previously the FM is more likely to use her experience elsewhere. Could Humza Yousaf be given health with his justice brief going to someone else? There are many capable women but do any have the experience? Perhaps not, but then consider how well Kate Forbes has done in finance. The thirty one year old was elected in 2016, and four years later was called on to deliver a budget with less than twenty four hours notice when Derek Mackay resigned. She is one who almost certainly will remain in position.

One new MSP who will undoubtedly feature in the new Cabinet will be Angus Robertson. His long experience at Westminster as an MP and leader of the SNP Westminster parliamentary group, and in the party should see him with his knees firmly under the table, perhaps in a role similar to the one Michael Russell held (Cabinet Secretary for the Constitution, Europe and External Affairs). The next referendum will, it is being said, have a strong international and European aspect, so again Robertson would fit well within this as he speaks fluent German and after university he worked as a foreign and diplomatic correspondent in Central Europe for the BBC World Service. Robertson was also the organiser of many successful SNP campaigns so he may be in the frame to organise indyref2.

New faces will almost certainly be in the front seats at Holyrood and perhaps some of the new intake may even appear in junior ministerial posts with those there in the last session moving on to greater things. Maree Todd looks like one to watch as are Ben Macpherson, Ash Denham and Mhairi McAllan who, since January, has worked as a special adviser to the First Minister on environment, climate change, land reform and renewable energy policy – areas that overlap those held by former MSP Paul Wheelhouse whose position is now up for grabs.

New faces were also apparent at polling stations this year. Everyone over 16 could vote with recent legislation enabling some prisoners and all foreign nationals resident in Scotland to vote. Those with indefinite leave to remain or equivalent status, could also stand as candidates. So around 55,000 foreign nationals and 20,000 refugees were given the right to vote in this election as a result of the changes.

Twitter carried heartfelt messages of gratitude from many, overjoyed at being able to vote, feeling accepted by the country they now call home. Many Syrian refugees turned up to vote. One particular tweet caught attention about a guy who took a photo of himself beside the polling station sign so thrilled was he at having voted for the first time. A Norwegian woman who had lived here for fifty years voted for the first time as did a woman who had been here since the days of Ted Heath. And the new South of Scotland list MSP, Emma Harper, tweeted that her husband cast his first two votes in this election.

This surely is an indication of the country we want Scotland to be – welcoming and inclusive.

The First Minister is a great reader and she often quotes a matra followed by writers – show don’t tell. By making it possible for foreign nationals and refugees to vote the Scottish Parliament was showing what kind of country we aspire to be, not just shunting empty words around the ether. Show don’t tell. 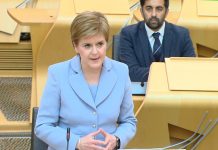