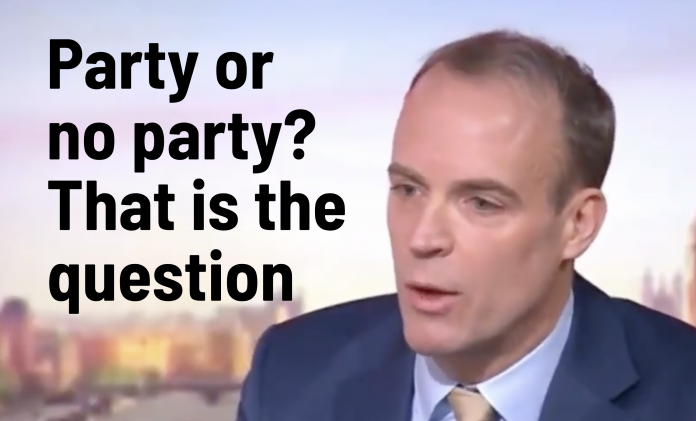 Molly Pollock looks over the Downing Street parties ‘rule’ with a ‘statute of limitations’ that starts and ends before the guests arrive.

So the hapless Dominic Raab was despatched on to the Marr couch this morning by the high heid yins in the Tory Party to kill the story that refuses to die and which is damaging the Party. As Deputy Prime Minister, Secretary of State for Justice and Lord Chancellor he should perhaps have chosen his approach and his words more carefully.

During the lockdown of last December many were enormously distressed and angry at being unable to visit or say their goodbyes to relatives because covid restrictions prohibited hospital visits. Their grief remains raw, as does the regret of many who spent Christmas alone rather than surrounded by family members, or who were unable to visit family and friends so had to content themselves with Skype calls, phonecalls or emails to wish their loved ones a happy Christmas. At a time when traditionally families and friends get together for parties, dinners, nights out or chinwags over a few glasses of their favourite tipple, people in the UK had to make do with lonely festive season days and evenings.

Most complied with the regulations, wanting to keep themelves and their loved ones safe, understanding that the virus was dangerous and not wanting to pass it on or contract it themselves. But while we were abiding by the rules it appears those in Number 10 Downing Street may have had other ideas about enjoying Christmas.

Party or no party?

The rumour is that on 18th December 2020 a Christmas party was held at Number 10. Further rumours suggest there was more than one party (the Daily Mirror had reported that in November, when in the midst of the second lockdown with London in Tier 3 so no mixing inside allowed with anyone not in the household or support bubble, the Prime Minister gave a speech at a packed leaving party for a senior aide). One person on Twitter said there was a celebration every Friday evening as Carrie was adicted to parties, but that has been denied.

But the rumours persist of at least one celebration, with drinks, nibbles and games, with neither categorically denied by either Johnson or Raab, both merely saying that “the rules were followed”. Well, the rules said no parties.

If there was no party or parties why has Number 10 not come out and denied the rumours? Raab’s attempt this morning on Marr merely muddied the water with his inconsistencies. Sent to close down debate he insisted the rules governing parties and gatherings were heavily caveated (therefore suggesting any party at Number 10 might not have breached the rules), while insisting the rumours were unsubstantiated claims by anonymous people. He himself, he said, hadn’t been there so couldn’t give any further information. (Question: Why wasn’t Raab invited to the alleged party?)

Raab dismissed questions about whether he had asked others about the party or discussed it with anyone, but did agree that “if anyone held a party of course it was against the rules”

Really, Mr. Rabb. A great many people would dispute that statement. And many who have committed crimes will rub their hands in glee, anticipating getting away with whatever crime committed if they just steer clear of the police for twelve months. And if the police don’t “investigate things that have taken place a year ago” have they been supplied with crystal balls so they can investigate crimes still to take place? The idea that a politician can say this with a straight face on a television interview and expect the viewing public to believe it is treating the public with utter disdain. One erudite wit on Twitter even suggested that because of swingeing cuts by the Tories to all of the justice system, it’s normal for the police to be looking back and investigating things that took place three or four years ago.

Crissida Dick, Commissioner of the Metropolitan Police had said during a television interview that no compaint had been received about the alleged party at Number 10. This, of course, resulted in letters from politicians as well as letters, emails and tweets from members of the public

Rabb’s appearance on Marr came in the wake of the statement by the Metropolitan Police that although it did not routinely investigate “retrospective” breaches of the Covid regulations, it was considering the correspondence it had received. https://www.mirror.co.uk/news/politics/police-considering-complaints-over-no10-25616994

The statement from the Metropolitan Police caused a further furore on Twitter with another avalanche of tweets and letters being sent off querying this stance. Some pointed out that the alleged event wasn’t yet a year ago and that putting a time limit for investigation of this was ludicrous. This wasn’t some alleged party by people who didn’t know any better but one attended by those who actually made the rules and laws, and that its investigation was definitely in the public interest.

Some referred to the heavy-handed action by the police of a peaceful candlelit vigil at Clapham Common to remember Sarah Everard, a young marketing executive kidnapped and murdered by a member of the Metropolitan Police. Police swarmed over the demonstrators, forcing women to lie face downon the ground, as the vigil apparently breached Covid rules. At the time London’s mayor Sadiq Khan described the scenes as “unacceptable” but said “The police have a responsibility to enforce COVID laws.”

Many on Twitter pointed out other instances where the police had intervened and large fines had been levied by the courts.

A few senior barristers waded in, tweeting that the law is clear on how long someone can be charged after a COVID related offence. It’s not one year but 3 years, or 6 months after all evidence has been collated by the prosecution.

Breaches dealt with at time of occurence

A few others have pointed out that covid breaches are normally dealt with at the time of occurence as it was difficult and resource intensive to investigate historic breaches. So the police’s consistent approach is that there simply aren’t enough officers to retroactively investigate Covid breaches, only pursuing a breach at the point of occurrence. However even those people believed this case is so egregious that in was in the public interest for an exception to be made.

This argument, that covid regulation breaches require to be dealt with at the time of occurence raised even more comments and questions, with many pointing out that there is a police presence in Downing Street 24/7, with police actually opening the Number 10 door to let people into the building.

Number 10 Downing Street gives the appearance in photographs of being a fairly modest terrace house but, like the Tardis there’s much more to it than meets the eye. The complex has over 100 rooms in several houses, all connected by a rabbit warren of passages.

“While the sign for Downing Street is rather small, there is usually a large crowd pressing against a tall wrought iron fence, where a single Bobbie (police officer) stands with a clipboard checking off the names of official visitors on a piece of paper, dignitaries that arrive via armoured limos.”

“If you think this is an innocent instance of casual British security, have an eye beyond the gates to the heavily armed officers carrying automatic weapons.” (The secret to visiting #10 Downing Street – https://theprovince.com/travel/international-travel/the-secret-to-visiting-10-downing-street)

Security around Number 10 is strict. Anyone visiting, whether on government business or for a Christmas Party, will have been vetted and security checked, with their name listed for entry through the various stages of security. These will have been recorded by the Police, compiling a register of everyone coming and going to the nearest minute. So the police must know if any events were held during lockdown and exactly who attended.

The big, unanswered question therefore is: if the Metropolitan police, who provide security for Downing Street and would have had officers there on the night(s) in question last year, were aware that covid regulations were being breached why did they go along with it? And why, if such event(s) took place, didn’t the police on duty report it as an illegal event, pursuing the breach at the point of occurrence as is said to be their policy? And why didn’t they break it up, as they did other covid regulation breaching events?

Instead this has been kept under wraps for nearly a year. To many it sounds a bit like one set of laws and regulations for us and other for our rulers.

This disregard for honesty and transparency is extremely dangerous for our democracy and further threatens it. If it is believed the UK government is passing laws and regulations from which government ministers and certain of their associates are exempt, and if it’s believed the police are protecting them from prosecution, then does the UK remain a democracy in anything more than name?

This furore comes hot on the heels of Pete Wishart reporting what he claims were clear breaches of the Act that forbids cash for honours, insisting no-one should should be able to buy their way into a Parliament, and that Boris Johnson is not above the law. Despite recent events and massive publicity, the Metropolian Police refused to investigate Wishart’s claims that peerages had been bought, their reason being there was insufficient evidence for an investigation.

What’s Boris playing at with Covid?