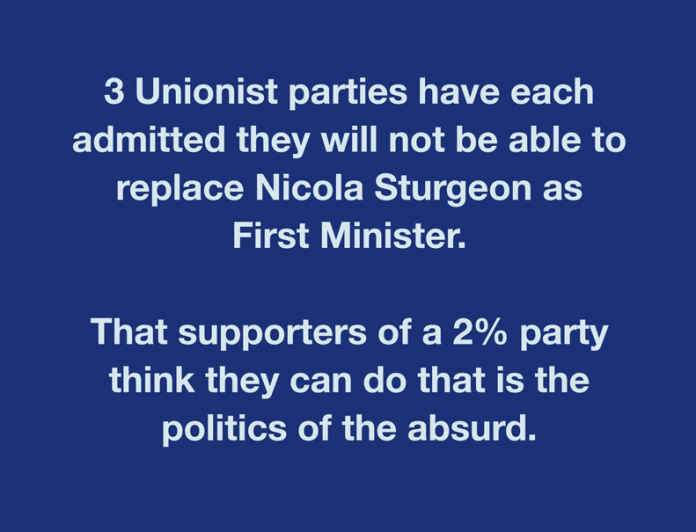 There are fundamental questions on the core purpose of Holyrood elections which are getting lost in a premature and immature Trumpian mish-mash of outpourings from the 2% party with its coterie of ‘Sturgeon must resign’ folllowers. Whatever mixed messages are coming out of the polls there is no doubt the SNP will win the election and Nicola Sturgeon is poised to become First Minister in the new parliament. As we have predicted before Nicola Sturgeon will not be resigning.

We are electing a devolved government for the next parliamentary term to run the matters currently devolved to Scotland. The other promise is the opportunity for a legally held referendum, whether that is under the an agreed arrangement with Westminster or the Scottish Parliament’s own powers to hold referendums. To make that possible and keep Scotland’s future options open we require a majority of MSPs who will support the process of arranging a legal referendum when Scotland is virtually Covid free and mass vaccination has been achieved.

This election is not about independence. It is about the governance of Scotland under devolution after 6th May. A commitment for an independence referendum is not the start of an independence campaign which needs considerable work to enable an informed and positive campaign, addressing the issues facing Scotland in a very different decade from the last referendum.

The only real issue that is important at this juncture, which helps lay the groundwork for the future, is to campaign with a clear focus against Scottish Tory unionism. The Conservative and Unionist party in Scotland are backing Boris Johnson’s agenda to remove powers from the Scottish Parliament and increase the influence of the unelected Union Unit Johnson has installed in Edinburgh for the Scottish Secretary, who will make increasing decisions on how money is spent in Scotland without the cooperation of the Scottish Parliament. Scotland is to be governed by force of law, not consent.

But here is the thing. Johnson is toxic in Scotland. He does not appear on any of the literature they are pumping through doors. They avoid talking about him at all costs and he has been told to stay out of the Scottish election. Yet it is Johnson’s agenda for Scotland they are campaigning for. Funny old world, especially as Johnson is now facing growing discontent in England over continuing sleaze allegations, and an investigation by the electoral commission. The thing that has really got people worked up is the cost of wallpaper for the Downing Street flat at £850 a roll. That is so much easier for most people to relate to than billions wasted on faulty PPE.

It is falling apart for Johnson with a poll indicating voters in England now want closer ties with Europe and have no idea what ‘Global Britain’ stands for with increasing numbers now regretting their Leave vote. How long till there is a new resident in No 10 who will want to change the wallpaper?

There is also a very strong positive campaign from both pro-independence parties, building on the trust people have in the Scottish Parliament, the SNP and Nicola Sturgeon. The SNP and the Greens have presented manifestos that are ambitious and reflect the values at the core of a long established social democratic concensus in Scottish politics. Helping the hospitality industry get back on its feet, supporting the new industries of the 21st century building on Scotland’s history of innovation and tackling the challenges of climate change by developing the skills and industry expertise in oil and gas towards the energy industries of the future.

Newsnet has always recognised the right of others to set up new independence supporting parties. Scotland is a democracy. We also have a host of list parties on the other side advocating the abolition of the Scottish parliament. None are significant and fall into the 1% and 2% category that is the common lot of small list parties. They will attract a few hard core unionist votes which could have some value in drawing away votes in some Tory marginals. The new 2% pro-independence party is one whose backers have consistantly called, for months on end, for Nicola Sturgeon’s resignation. They have failed at every turn.

We have also said in previous articles that winning an SNP majority just on constituency seats is a very tall order and that is looking even more difficult at the moment than it did a couple of weeks ago. All the talk of supermajorites and immediate independence negotiation has not gone down well with the electorate and set independence back. It is clear there is support for a second independence referendum but the electorate want the focus for now to be on getting past Covid and some restoration of normality, with a Scottish government supporting the most vulnerable in society. That’s not on Johnson’s agenda.

We will be back shortly on the spate and state of the polls with just 7 days to go.